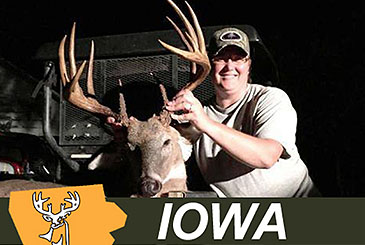 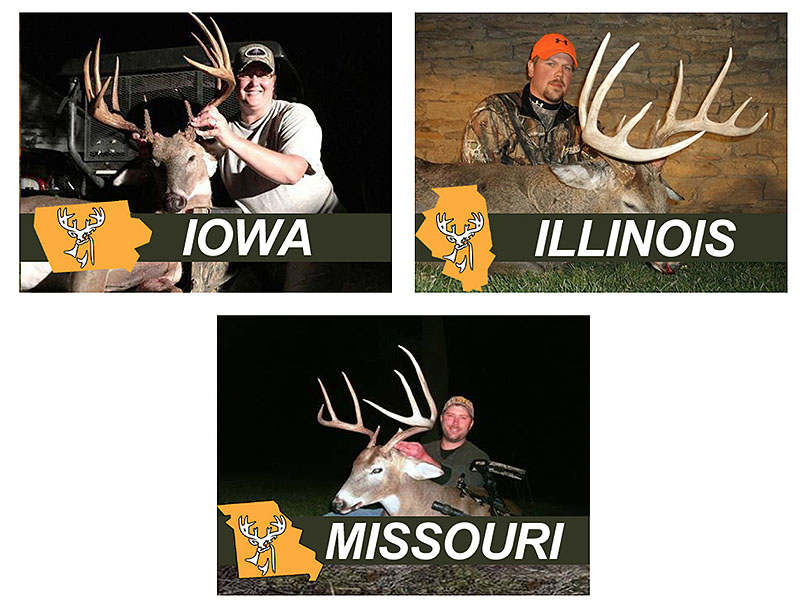 After doing some midday scouting, I found myself standing in a swamp area, at the foot of an oak ridge.  A secluded clover field lay at the top of the oak ridge.  I discovered several sets of mature buck tracks on a trail leading through the swamp, up the oak ridge, and into the clover.  Believing the bucks were traveling the trail to the tender crop,

I carefully positioned a stand location nearby.  I was perched high atop a white oak in anticipation of an evening ambush by mid-afternoon.  At 3:45 PM several does traveled down the worn path to the clover.  At 4:15 PM the trail was again alive.  Three bucks, nonchalantly, began making their way closer and closer to my position in route to the food source.  The first buck was an animal that had already shed his antlers in the cold month of January.  The second buck was pushing Pope and Young status.

The buck at the rear of the antlered caravan was a monstrous twelve point, that would have easily met the minimum requirements for the Boone and Crockett Club.  My heart began to pound furiously.  I thought to myself, “Finally, my chance at a genuine Boone and Crockett buck.”  My presence in the treetops remained undetected for a short time.

The first buck “hit the brakes” just within bow range.  The two animals following close behind stopped as well.  All three bucks put their noses in the air, and rotated their ears in all directions in an attempt to detect the slightest hint of danger.  The trio abruptly turned and ran back in the direction from which they came.

My grand slam ambush had been spoiled.  I disappointingly placed my head between my knees and asked myself that familiar question, “What did I do wrong?”  I chose to live in denial and return to the same stand setup the following morning.  On the morning hunt, I viewed a few does.

I returned to the same setup that evening.  I saw nothing.  I returned the next morning and saw no deer.  My continued failure was a result of hunting the location too often, especially after being detected.   “Consecutive hunting” from a single stand location may be sabotaging your attempts at a mature whitetail buck harvest, as well.

Fortunately, I have kept a hunting journal since 1994, which contains explicit details of over 400 whitetail hunts.  I obtained the following data surrounding consecutive location hunts:

no indicates an unsuccessful hunt  (Not viewing deer from a stand location.)

I soon discovered I had been guilty of implementing the “consecutive hunt” strategy thirty-nine times, which had encompassed 109 hunts, over the past 5 years.

I have only hunted 5 consecutive times from a location on one occasion.  I was not successful on the fifth consecutive hunt ever.  The data surrounding the aforementioned hunts are as follows:

Your success is reduced by hunting a stand location repeatedly without giving it a rest.

It would appear from my studies; on the third consecutive hunt one’s odds for success are grossly decreased.  As a rule, one should never hunt three consecutive times from the same stand location.  A stand location needs a two to five day rest prior to your return for another hunt.  This will prevent whitetails from patterning your movement in the timber.

The only exception to over hunting a stand location may occur during the peak of the rut.  I know some funnels and unique topographical setups that almost always deliver at that magic time.

Don Roper, President of the Archery Big Bucks Club of Missouri, Vice President of Missouri Bowhunters, and Official Pope and Young/Boone and Crockett Measurer, states, “I usually put a good solid evening and morning hunt in a location and never go back for a third hunt.  I make sure not to leave my scent three times in a row.  I have killed five bucks which qualify for the Pope and Young Club.  Three of the five animals were harvested on the first hunt in a stand location.  There is a definite correlation between the number of times one hunts a stand location and the amount of scent one leaves in an area.”

On some occasions these dogs begin tracking a scent line that is often many days old.  Dogs are also being used to detect dead bodies hundreds of feet under water.   Knowing the capabilities of a dogs nose it would be fair to assume that you would greatly enhance the whitetails ability to detect your presence by leaving too much scent in one area.  This is exactly what occurs in locations which are hunted repeatedly.

In an attempt to avoid hunting the same location too often I utilize a hunting strategy called “Musical Chairs”.  I position six to ten portable stands in different locations that I believe will produce shot opportunities at desired animals.

After hunting from one location, I hunt from one of the remaining locations on the following trip to the timber.  I work the stands in a rotation, much like a pitching staff of a major league baseball team.

This strategy keeps hotspots from being overhunted.  “Musical Chairs” offers the hunter a change of scenery, and allows one to choose a stand for hunting with a desirable wind direction.

Gary Lucas, owner of a local archery shop in Moberly, Missouri has harvested a half a dozen Pope and Young bucks throughout his hunting career.  Lucas stated, “I never hunt more than once from a stand location.  I pack up and move on.  I guarantee whitetails detect your location when you hunt from the same stand time and time again.  The first hunt from a location is always your greatest opportunity for filling a tag.”

On a cool evening in October I viewed a nice buck working the back corner of a cut corn field just out of bow range.  Agonizingly enough I avoided hunting there in an effort to cleanse the corner of my scent.

I returned several days later.  At first light the mature whitetail buck appeared from the timber into the field.  I waited for an ethical shot and recovered my trophy moments later.  I am now convinced that my ambush would have been spoiled if I would have over hunted the area.  So,  if you are wondering if deer know you’re hunting them from a specific location…….they probably do.