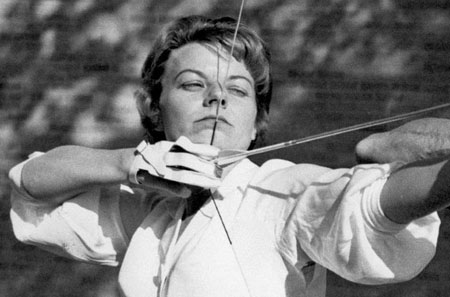 Tribute to Ann Clark: “Goddess of the Modern Era of the Sport of Archery”

On August 30, 2011 I received an email with the subject line, “Matter of Interest from the past.”

Wow—“What in the world is this?” I asked myself.  The email body read:

I really don’t expect you to remember me, you were very young all the years I represented Ben Pearson Company.

I am presently the Hall of Fame, vice president.

My name is Ann Clark; I represented Ben Pearson Archery for over twenty years …..

Thus began my re-acquaintance with one of the most remarkable individuals I have known, and anyone who met Ann will most likely voice the same sentiment. As a matter of fact, Dad and company officials would often receive letters following Ann’s archery exhibition—an example being the following excerpt from a letter by sportscaster Jimmy Crum in 1962 to Jack Witt, who was a 2016 Hall of Fame Inductee and marketing director for Ben Pearson Co.:

May I take this opportunity to tell you that the Ben Pearson Company is indeed fortunate to have a woman like Ann Clark as a representative. Her ingratiating personality, poise, stage presence, charm and deep warmth, not to mention her exceptional ability as an archer, can lead to nothing but the finest of publicity for your company where Mrs. Clark is concerned. In 17 years of sports casting, I have had the opportunity to meet and talk with many champions, but in my book, Jack, Ann Clark is in a class by herself.

Ann truly is in a class by herself. 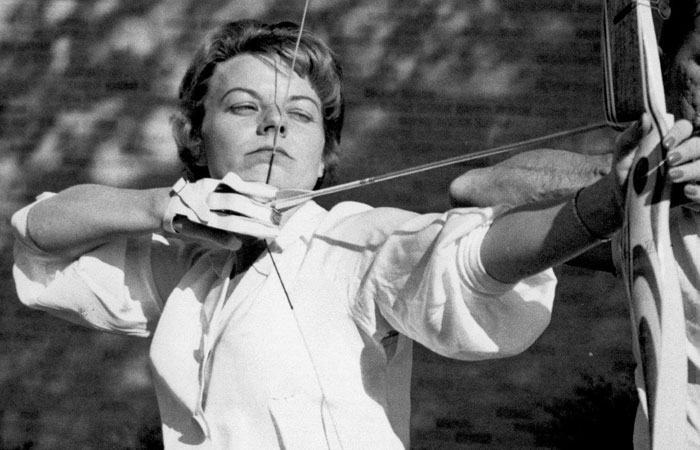 Her incredible journey in the world of competitive archery includes the following achievements:

I did indeed remember the legendary Ann Clark upon receiving her email in 2011. Even as a child, I considered her among the top rung of my archery heroes. Since that time in 2011, we corresponded often and it was a high honor to receive Ann and her close friend, Marilyn Benz, as our guests here in Arkansas in November of 2011. Mother was here and we had a wonderful time sharing memories. Ann returned with daughter Debbie in 2015. Ann, at age 91, hunted deer with her crossbow for three days in our rock-clad canyons and rolling hill pastures. No luck but what fun we had.

The last correspondence from Ann was a letter dated January 17, 2018, which read:

Sorry I’m so late saying thank you for Paulette’s very lovely card. So beautiful makes me feel good, just to look at it.

I have been down with severe arthritic shoulder and back pain for months. Feeling better today.  Had a shoulder injection cortisone and Friday an epidural in lower back. I feel almost human today.

Did not get any cards out this year, also did not run for the HOF Board again. I’ll miss putting my two cents worth at meetings. I have had a very long run and have enjoyed my many years of association on the board.

I hope you are all doing well, Mary included. It’s been a dreadful cold winter.

Take care dear ones; I love you all very much.

Diane Miller, executive director AHOF, wrote beautiful words for Ann on the front page of the Archery Hall of Fame Website, which ends with: “If you see a bright shooting star in the sky tonight chances are it is Ann letting us know she is ok and reached her destination safely. God Speed, until we meet again.”

At times such as these, it seems that archers look to the heavens to express a feeling or event, just as Maurice Thompson penned years ago: “So long as the new moon returns in heaven a bent beautiful bow so long will the fascination of archery keep hold the hearts of men.”

I could not help but notice that Goddess Ann passed in the waning hours of a “Blood Moon,” the last phase of a rare astrological event not seen in 152 years. The event featured a trilogy of events including a Blue Moon (when the moon is 14 percent larger at moonrise), followed by a lunar eclipse, and then an amber-colored moon known as a “Blood Moon,” happening all in the same night. To me, that echoes Ann’s life: The larger, closer Blue Moon symbolizes her disposition as ingratiating, poised, with deep warmth and a superb stage presence affecting all with her light—before, last week, she eclipsed in a final colorful farewell on her journey to the heavens. Was this timing just a coincidence?

We all love you, Goddess!