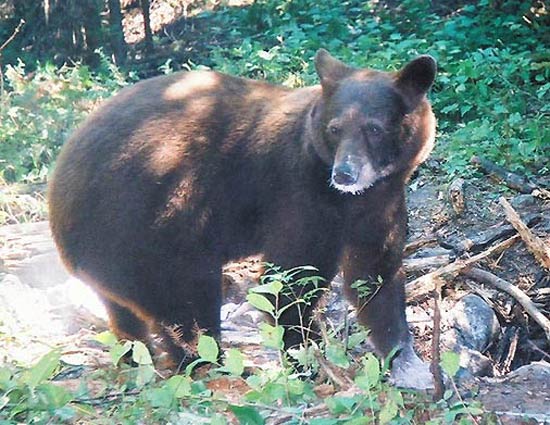 A unique feature of Ontario bears is a white “Blaze” found on their chest. Sometimes it is a small white spot of hair located on the center of the briquet. Other bears sport a more magnificent blaze that forms a “V” across their chest running from shoulder to shoulder. I find it rare in our area if a bear doesn’t have a blaze.

They run the gamut of pure white to chocolate to red to blond. I once had a very pretty bear that was a deep mahogany color. It was a young bear and I passed him up to let him get older and bigger. I saw him several times on stand that year. Each time I was more tempted to take him. I hunted that stand the following year. He didn’t show up.

We have other sites in the same area but no one has seen that bear since I first spotted him. That was several years ago. He might have been harvested by another hunter or he may have left the area. My hope is he is still in the area. If that is the case he is now definitely the age of bear we want to hunt.

I also had a huge brown color phase bear come to one of my stand sites. I saw it moving through the brush from a distance. This was one of the biggest bears I have ever encountered, and it was brown!

Each step the bear took it’s back and hams quivered like a bowl of Jello. It looked and was the same size as a hugh grizzly. It stopped fifteen yards from me and stood motionless for five minutes. I couldn’t shoot it where is stopped. There was no clear shooting lane. All of a sudden the bear bolted and was gone in a second.

A big bear like that puts the fun in bear hunting for me. Just knowing there is that kind of trophy out there makes hours of sitting on stand worth every minute. Maybe that bear will come by my stand next year. Or maybe one of my hunters will get a chance at the Jello bear.

Anyone interested in bowhunting with Fred Lutger can contact him at 708-532-4133 or fred@freddiebearsports.com or at his archery pro shop and sporting goods store Freddie Bear Sports in Tinley Park, Illinois.