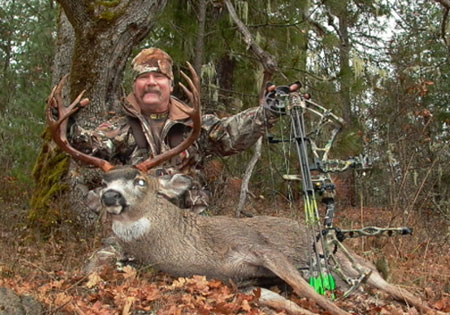 First of all before I continue I’d like to explain that because of the type of hunting I grew up around I never had the opportunity to hunt large dangerous game, so of course I only used the traditional estrous, dominant buck, and cover scents such as pine and cedar. I can remember as a teenager stuffing pine and cedar bows in between my hunting apparel and packing it in a box out in the shed. This ritual was always the christening of every hunt.

Eventually when I moved west I began working cow-in-heat and bull scents as elk became my new passion. Again this proved to bring good fortunes as the result.

Even though I’ve shared most of these years in the backcountry with Black Bears and Cougars I never have really looked at them as “dangerous game” simply because every encounter I’ve ever had with one ended up with them either blowing out like their hair was afire or not and consequently having an arrow mortally pass through their vitals as the outcome. 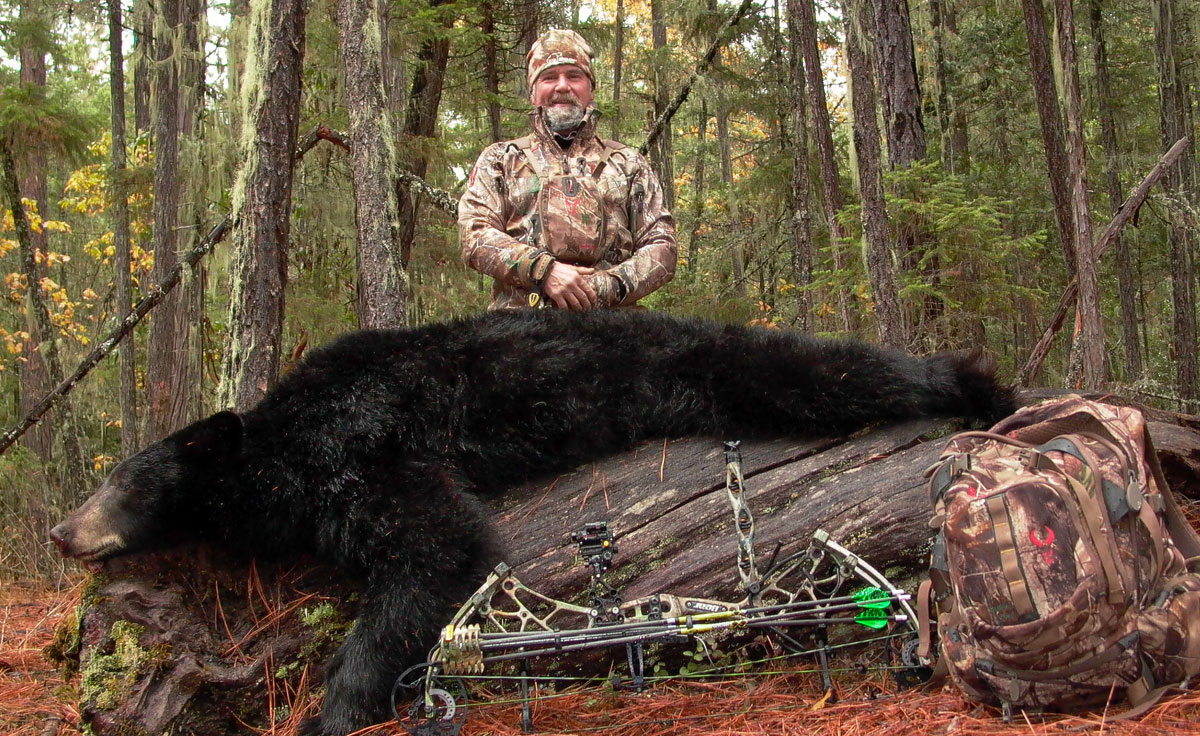 During all of those seasons using scent, I haphazardly ignored every warning that every bottle of scent had printed on it stating “DO NOT PUT ON YOUR BODY” by doing the complete opposite. To me it was like an open invitation for a buck or bull to dare to attempt to overcome me and my bow. Besides I was the “King of the Forest” and where else would I want a trophy to come running into but my back pocket?

I always felt that I was at my very best when I created close-range shots for myself so “too close” was never a concern but a wish. Therefore estrous juice was the ultimate cover scent to me.

I used to have dreams of myself casually waving a monster into bow range while whispering “I dare ya” under my breath. Oh yeah baby. I always found myself strutting around the forest like some badass tom fanning my top-of-the-line camo and drumming away with my fancy calls while backing it all up with the finest archery gear on the planet. In my little mind I was the predator of all predators and every living thing around me was considered mere prey. Well guess what…I was terribly wrong again…in a number of ways and inevitably that little boy in me had to grow up before something really bad happened. I never imagined that I would need pee running down my leg to learn my lesson. I finally did at the age of 62 when this occurred.

Lisa and I were spending a Saturday morning tracking a small herd of Roosevelt Elk and by the time we earned the right to finally see them they bedded on a tactical perch that was perfectly designed by Mother Nature to protect any animal with a good nose, keen hearing and the natural instinct to rest there. When we quickly realized there wasn’t a high percentage move to be made we bedded down as well. We spent the entire afternoon glassing from behind an extruded rock formation (another design by Ma) until early evening when the herd finally stood up, stretched, and started browsing their way in the opposite direction of our position. After rubbing ourselves down with Conquest Scents’ “Elk Herd In a Stick”, we grabbed our gear and went along for the ride while keeping the winds in our favor. There was a branch bull in the herd with a large frame so of course that’s all the drive we needed to keep hustling along. As we battled the rugged terrain to keep stealth and pace we kept sufficient reconnaissance but as the sun quickly fell we reluctantly agreed we had to back out and find our way back to camp before dark. We were somewhat in uncharted waters and had no phone service or GPS so we told them we’d see them in the morning and bowed out. As we skirted the hill to beat the clock we cut an old partially overgrown skid road and took advantage of level ground to speed things up.

As dusk fell we came into the northeast side of the mountain and even though visibility was now minimal I spotted a black object 100+yards downhill from us, right on the skid road we were traversing. The dark body stood out to me, so I stopped Lisa and pulled up the binos, only to see a black bear staring back at me in full alert. Of course I instinctively looked down at my bow and nonchalantly nocked an arrow but when I looked back up he had already cut the distance in half and was rumbling, grumbling, stumbling straight at us! Because of the steep cliff below and the sharp bank above there was virtually nowhere for him to go but right through us. When I yelled “whoa” to no avail, I drew back only to realize I couldn’t focus fast enough on my pins, so I reached out to the side with my bow full-drawn, pointed, and desperately released. At that “point” this brute was maybe 7 yards on a full run. Lisa was in the fetal position behind me as he passed within inches of me and almost ran right over the top of her! He shot up the cut bank behind us and vanished in a blink. Mind you this happened in seconds, all while the thermals were blowing our scent right into his nostrils! We looked at each other in dismay as we were now listening to him breathing deeply right above us. I nocked another FMJ and whispered  “shhhhhhhh” to Lisa as she was trembling in fear. We kept motionless for what seemed like an eternity until I couldn’t “bear it” anymore and waived Lisa to follow quietly as we tiptoed around the next sweep in the trail. When we finally felt out of sight you never saw two hunters hightail #~<* outta there like that before in your lives..or ours!

When we finally came to our senses we stopped momentarily and caught our breath enough to speak. All Lisa had to say was WTH? What could I say? I was totally baffled by his actions. His reaction was that of the dangerous Alaskan Black Bear, very uncommon in the lower states. I wasn’t even sure whether I hit him or not, to boot. We eventually reached an area where we knew we had phone service and I called my old buddy Roy. I told him I might have whacked a bear and needed a gun and some bright flashlights. He agreed to meet us at camp. When we finally met up he acted like he was getting ready for a title fight until I told him the whole story. His game face was now showing a little uncertainty and he no longer was doing the “Ali Shuffle.”

We eventually trekked to the scene and began our search for my arrow. We spent some time looking until we realized that finding a blood trail was our only feasible option because of darkness. I explained to Roy where we heard him breathing last so we found our way up through the thicket while using my blood light for sign searching. We fought the dense brush until it eventually opened up into a game trail. At that point we still hadn’t found any blood. I decided to walk the trail slowly uphill for a bit and when I came over the first rise, low and behold there he laid on his back, spread eagle! After poking him with guns drawn we commenced to hoot and holler with glee over the size of him. After careful inspection we found a “Toxic” entrance hole in his chest but no exit wound. Now we knew why there was no blood and I expected my arrow to be still in him. I cut him open carefully and immediately felt my FMJ intact in his cavity. I had to break it to get it out.

Because our house is overrun with mounts, including 3 bear rugs, Lisa insisted that I not cape him out. I reluctantly agreed, mostly because this sumbits wanted to eat us, so of course, I wanted the trophy in return. However, while I was gutting him Lisa sneaked a little something into her pack that I didn’t notice. I was too busy imagining the reality that we almost went from “all that” to “all scat.”

At one point Lisa said my shot was the best one that I ever made, and I couldn’t have agreed more. I never expected my greatest shot to be at point blank range but considering the alternative I’ll take it, especially coming from her since it was her butt in the sling too. I don’t know what Mother Nature was thinking on all of this but I’m sure there was a reason. Maybe she just wanted to put this ole’ strutting tom in his place. It worked, for I will always be humbled by that experience and I will NEVER put animal scents on my body ever again!

Meanwhile back at the ranch Lisa took it upon herself to deliver a specimen to my taxidermist to be made into a piece of memorabilia. To my surprise when Chet called me weeks later to inform me it was almost done.  I asked him what he was talking about and he told the story of Lisa’s visit and the mount she wanted made. The mount grew on me as a recollection of who won that battle of survival…and also a place for Lisa to hang her necklaces.

It took a long time for me to write this article for a number reasons, but mostly because I wanted to find an explanation to share with you beforehand. Our conclusion to this encounter can only be that when Brutus caught a whiff of that amazing scent we use it triggered him in a way that by the time he committed to his attack there was instinctively no turning back, even after he knew we were humans. We are certain that our Badlands scent elimination apparel, HECS garments and DDW applications were instrumental in our near demise as well. Luckily when the hammer came down from my 350 fps arrow pushing a Toxic broadhead through his vitals he lost his appetite for good. On the other hand since that confrontation I will always count my blessings for that outcome with the utmost respect for the animals I share the wild with and the gear that continues to provide for and protect me and my family. Unlike my “grave” error in judgement when you read those warnings on scent bottles, don’t take them lightly. I have found they are truly words of wisdom.

How To Cold Smoke A Wild Hog

SETTING UP YOUR TURKEY BOW

SETTING UP YOUR TURKEY BOW

The Problem With Turkey Hunting Is?

Why Don't My Broadheads Hit Where My Field Points Do?