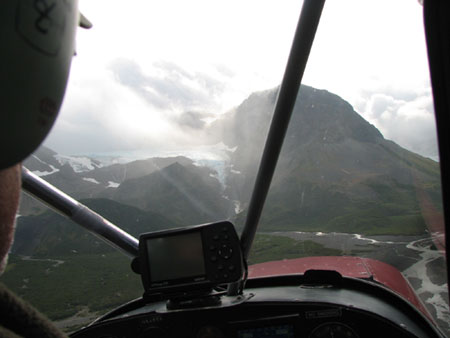 I nicknamed him “Crash” for a reason. He has survived three horrendous Super Cub wrecks. In that this pilot works as a master guide in the Yukon Territory his area of operation is completely void of rescue support. That makes his job sketchy.

To be a consistently successful guide requires that he transport clients into the backcountry to remote base camps. That is where the giant Alaska-Yukon moose and big grizzlies live. His ability to get hunters into these unhunted hot spots is part of the reason that he and his operation is awarded first place trophies at the SCI banquet every year.

Working in remote wilderness with a souped up two seat Super Cub aircraft is the best way to unravel the wild country. Landing strips are most often river gravel bars or short bumpy mountain tops. The perils that have crashed his plane into the wilderness have been two rocky mountain passes and one river, whose course twisted a bit too fast.

There is a weather feature that occurs over mountain passes that is called a down draft. Wind will climb up one side of a pass and then like a curling breaker on Hawaii’s big island beach, the invisible wind turns from a climbing updraft to a giant wind-hand pushing down. This wind can occasionally blow near a hundred miles an hour as it travels over the far side of the pass. These churning winds can slam a small aircraft down into the rocks like a hailstone. Crash has done this pancake landing twice while crossing a remote pass.

The time that was most memorable occurred in the fall as the snow began to fall up in the Yukon. His Super Cub was slammed into the rocky pass so hard that it hardly skidded upon impact. Crash was alone and the tubular airframe of the Cub folded like it was made of McDonald straws. He was pinned in his seat but that was the least of his problems. The gas tanks in a Super Cub is located in the wings. They ruptured and spilled AV gas over him. Add to that, his back had been broken.

All aircraft carry an Emergency Locator Beacon  that triggers upon impact in a wreck. This ELB signals all passing aircraft that there is a major problem and triggers a rescue. The problem is that very few jets transverse this part of the earth’s sky.

Crash managed to crawl out of his seat and drag his sleeping bag to him. After getting into it he laid under the wing and waited. It took until day three for a rescue to be launched and he was rescued. His other “Mountain Pass Smack-Down” was remarkably similar but without the broken back.

Another colorful wreck involved miscalculating how much river he needed to lift off with a load of moose meat. The river snaked in a canyon. He was using floats on this Super Cub and that alone compromises and lengthens the amount of water needed for a takeoff. As he rocked the loaded Cub from the water and began to fly it became apparent that he didn’t have enough power to clear the big cottonwood trees that lined the twisting river. Rather than rocket the plane into the bank, Crash chose to go for the trees.

He chose to crash into the cottonwoods. Realizing that hitting a big tree dead center would result in his final landing, he wisely chose to split the difference between two trees and shear off the wings. This transformed the Super Cub into a more of a rocket. Amazingly he skidded to a stop without a fire and survived the wreck. The $50,000 souped up Super Cub became spare parts in a few seconds. Crash survived all three adventures.

At this point you likely don’t want to fly with my buddy from the Yukon territory but I wonder if you lean into risky adventures without even acknowledging it. You see, only a few adventurers get to stage a colorful ending in a plane crash. Most deaths in the backcountry are a result of getting wet and falling into hypothermia. It only takes a 5-degree drop in core body temp to begin the slide into the dark abyss.

I’ve see hypothermia reach for a victim who was part of my moose hunting party on a September river float. This hunt had been a tough one. It had rained, sleeted or snowed for five days. Everything was wet. In Alaska, you can only afford to use the best gear available. My gear from top to bottom was the best available.

I understood how to take care of rain gear. The new high-tech stuff required that it be clean and possibly re-treated with silicone. I’d washed it in Sport-Wash and treated it with Silicone Water-Guard. After treated, it beaded water like a piece of saran wrap yet it could breathe. My friend had some cheap raingear that the DWR coating had failed and it offered the protection of a wet beach towel on a cold day.

In the course of an hour on day five, he went from just cold to uncontrolled shivering, slurred speech and glassy eyed. We were losing him to hypothermia. I pulled over both rafts and we started a giant fire. We stripped all of his wet clothes off and covered him with our last dry gear. Like a wiener on a stick we moved him around near the blazing fire until his core temp had recovered. Then we made camp. It was close. Wet kills.

If you like adventure but want to always live through it I recommend you take a look at your rain gear. Take a hose and spritz water on it for a few minutes. If the water sheets and the surface appears uniformly wet you have a problem. Fix it by washing the rain gear in Sport-Wash. Then hang it outside and spray it down with Silicone Water-Guard. Let it dry and then test it again. Water should bead up and roll off of the surface. Now you can adventure safely. I also recommend not flying with my buddy “Crash”.