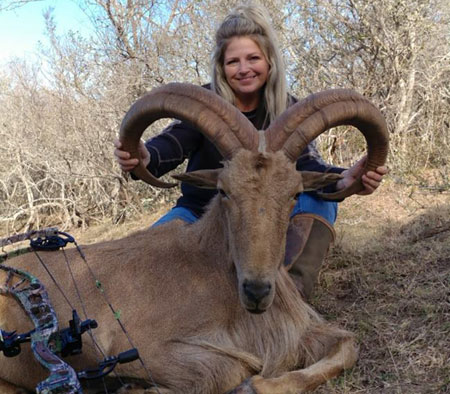 Is it possible to outsmart a wise old bachelor group of aoudads known as the ‘magnificent seven’? Texas huntress, Tammie Veach was on a mission to prove it could happen.

Living an outdoor lifestyle is an understatement when describing the Veach family. From raising quail and bird dogs to guiding bow fishing trips, they do it all. Tammie is in charge of keeping their Facebook fans abreast of the latest family outdoor adventure. One of their followers needed help with a group of old aoudads on his south Texas ranch; he knew Tammie was the person for the job. He called Tammie, and like kindred spirits, they spent the night talking about his property, hunting, and aoudad.

Tammie, her husband Cody, and the rancher arranged a meeting at his ranch. Tammie and Cody were excited to meet the rancher and couldn’t wait to make this happen. He described his place as 268 acres of rugged cactus, brush, and mesquite. There was an abundance of deer, turkey, and yes, aoudad. He estimated over 50 aoudads called the ranch home. There were a group of 7 old warriors who no longer ran with the main herd. They were ancient, and their health was failing, but they still sported very large horns. The plan was for Tammie and Cody to do their homework and pattern them; then everyone would meet back up to decide on a final strategy. For the rest of the week, Tammie and Cody would bait the most logical areas of the ranch to hold aoudad. Tammie did her homework and realized alfalfa, horse feed, corn, and mineral blocks would be the best attractant. She then placed game cameras over the feed to pattern the aoudad’s movement. 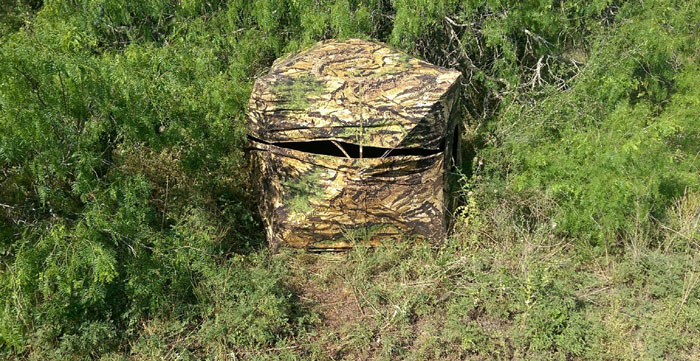 With the Double Bull Blind in place, it was time to hunt.

It did not take long for a large group of over 40 ewes to show up on camera. Escorting the ladies were three young healthy muscular rams who were definitely in charge. Not far behind them followed the group of seven old aoudads. They were ancient, in poor health and sporting massive horns. It was clear they were no longer part of the main herd. Cameras indicated a favorite trail they traveled daily so Tammie tucked her blind in the nearby brush. With the blind in place and the aoudad patterned, it was time to put the final strategy together. The rancher was impressed by the pictures and asked that Tammie and Cody save the oldest aoudad for him. It was not hard to pick him out and they decided to name him Pawpaw. That was fine with Tammie; she had her eye on a dun-colored ram almost the same size as Pawpaw. She loved his color and white stripe down his back, so she named him Dunny. 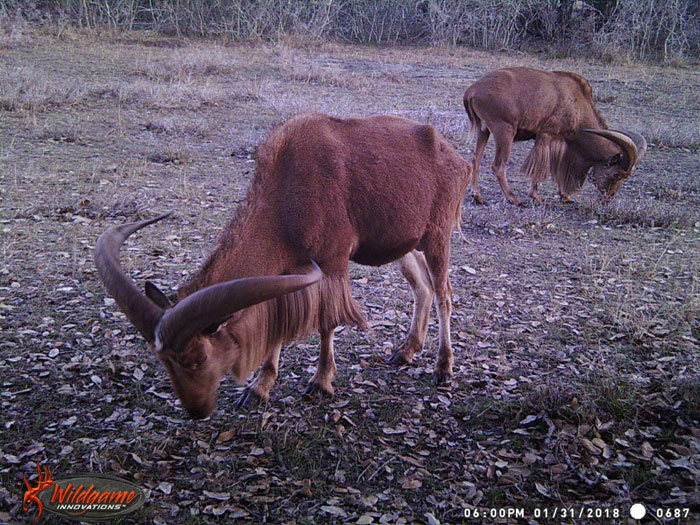 Saturday morning, Tammie and Cody got all their gear in the Double Bull, then organized the camera equipment, backpacks, and bows. Once the camera was in place, they settled in for their morning hunt.

The morning was full of anticipation, but only the 40 ewes came in, eating most of the corn as they went by. They would not easily fool the magnificent seven. After a mid-day break for lunch, Tammie and Cody returned to the pop-up for an afternoon hunt. Cody stepped out to corn the Sendero one last time. Spreading the last of the corn, he noticed the magnificent seven only yards away and headed straight towards Tammie. He ducked into the brush behind him and let Tammie know she was on her own. She turned the camera on and positioned it to cover the most likely place she would shoot. She could see them walking down the Sendero; it was if they read the script. It was not hard to pick Dunny out of the group and it was exciting to see him live and in person. They would walk a short distance, then eat for a bit, then walk a little more. Dunny finally paused broadside at 28 yards. When he looked the other way and moved his inside leg forward Tammie did not hesitate. Her Obsession bow worked flawlessly and the Muzzy Trocar broadhead hit perfectly. The old aoudad reeled and ran straight away 40 yards and dropped.

Tammie and Cody celebrated a sound strategy, great shot and exciting hunt. Giving Dunny a few minutes to expire, they decided to playback the shot on their camera. To Tammie’s disappointment the camera was off a few feet and the shot was not on video. That did not take away from exhilaration she felt and soon they were on their way to recover Dunny. The tracking job was simple and as they came upon him they noticed the other six aoudads standing over him. It was if they wanted to pay tribute to the old warrior one last time. 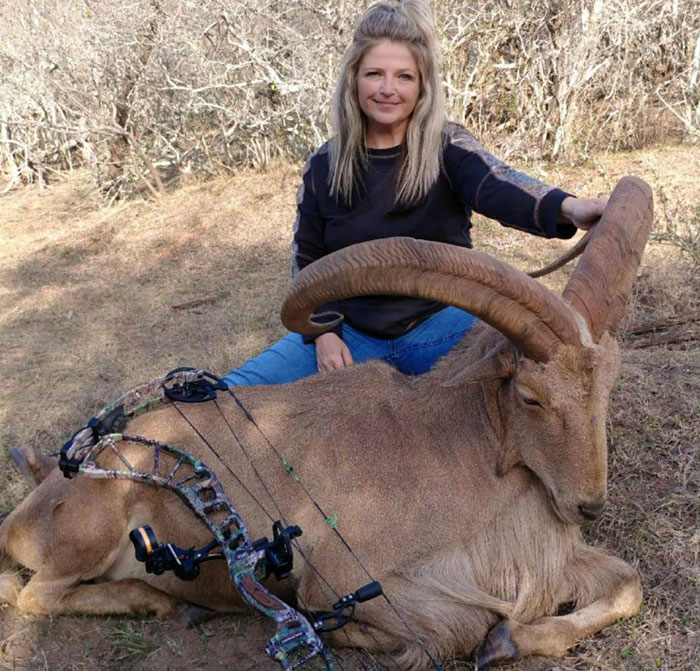 This old warrior showed signs of decline but was a fine trophy and Tammie knew it was time for his reign to end..

Tammie and Cody marveled at his condition. His hooves were overgrown, his teeth long gone and he had lost a lot of weight. The frame that this aoudad had should have carried the weight of a 400-pound behemoth. Instead, he weighed just 175 pounds. He had a nasty infected gash in his chest from crawling through the brush to eat. Even with all that trauma he still scored a whopping 138 7/8. Tammie and Cody had put together a plan to harvest an old warrior and there was great satisfaction when it all came together. 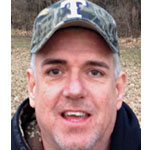 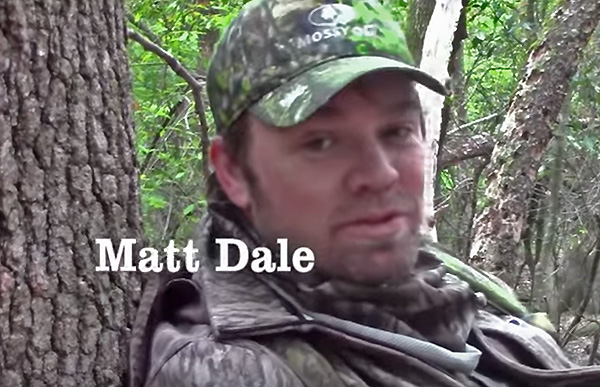 How To Get Those Silent Morning Gobblers 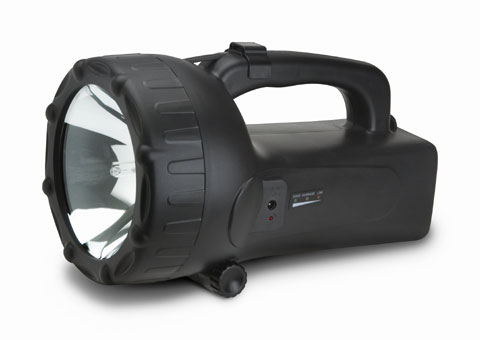 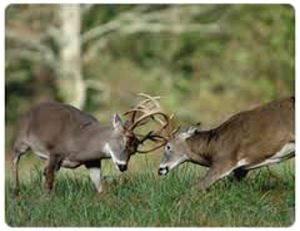 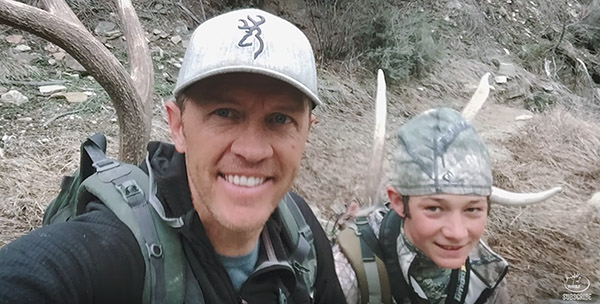