Here are outstanding women bowhunters who earned a permanent place of honor among the best of the best. 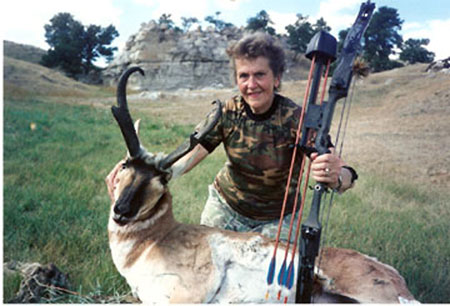 ASK TODAY’S BOWHUNTING ENTHUSIASTS to list up to 10 of the sport’s all-time top female hunters and you’ll most likely hear a variety of names. Younger camo-clad guys and gals may begin by tossing out such familiar names of outdoor television personalities including Eva and Tiffany, Kandi and Melissa, Vicki and Nichole, among others.

At the same time, older bowbenders like me are more likely to mention Ann and Brenda, Carolyn and Midge, Joella and Judy or the mere handful of other huntresses who were successfully tagging deer and other big game trophies before many in the current crop of lady hunters were born.

Meaning no disrespect to today’s popular and well known distaff bowhunters of the 21st century’s electronic age, I nonetheless feel it’s important to never forget our sport’s trailblazers who left a lasting mark on a fledgling sport when bows and arrows were primitive by modern standards and most bowhunting was done from the ground instead of sitting in trees and elevated platforms.

Consequently, as food for thought , deliberation, and continuing discussion, I’ll be using this and next month’s columns to spotlight a few of the women hunters I’ve personally known and feel convinced deserve to be remembered as those who led the way for other ladies to follow.

Here are a few names of women – some familiar and others likely unknown – that make my list. I’ve also briefly indicated why they deserve inclusion among those who have had a truly positive influence on bowhunting.

*Ann Weber Hoyt – Arguably the greatest female archer of all time, she dominated target archery from the day she took up the sport as a New Jersey high school junior in 1937 – winning multiple state, national, and world competitions throughout her career. But Ann also loved hunting and regularly tagged both big and small game. By 1971, when BOWHUNTER Magazine was founded, she told me she had killed 19 deer, several feral hogs, and one alligator. A Pope and Young pronghorn antelope Ann arrowed in Wyoming now hangs in the Earl and Ann Hoyt section of the Archery Hall of Fame at Bass Pro Shops’ Springfield, MO flagship store. Ann and close friend/tournament competitor Ann Clark continued hunting into their twilight years as part of a group they co-founded called The Dianas, after Roman mythology’s Goddess of the Hunt.

*Carolyn Siebrasse Zanoni – A nurse from Quincy, IL, she killed her first Pope and Young Club whitetail while still-hunting a family farm in late 1961, shooting instinctively and using a 40-lb. recurve when the temperature was 8 degrees and frozen snow covered the ground. Later in the 1960s, at a time when few if any women booked solo hunts and traveled alone to hunting camps, Carolyn booked bowhunts and headed to Utah where she tagged a black bear, mountain lion, and mule deer. Her accounts of these hunts, published in ARCHERY Magazine, inspired me to follow in her boot tracks on my own Western bowhunts. She also took P&Y record book caribou and multiple pronghorn antelope, and was the first woman to qualify for Senior Membership in the Pope and Young Club. I became good friends with Carolyn and her husband, bowhunter George Zanoni, and we shared numerous bowhunts at Wyoming’s Spearhead Ranch. I included a detailed chapter about Carolyn and her hunting accomplishments in my 2007 book, Unforgettable Bowhunters.

*Midge Dandridge – A Californian who started bowhunting with her husband, Hoyt Dandridge, in the 1960s, Midge was the first woman to publish a bowhunting feature article in BOWHUNTER (1972). Like Carolyn Zanoni, Midge bowhunted and killed a variety of big game animals hunting on her own. She also became a P&Y Club Regular/Senior Member and good friend of mine. A diminutive woman standing not quite 5 feet tall, Midge was featured in a 1970s Easton full-page ad beside 6-foot-10 NBA basketball player Darrall Imhoff, both dressed in camo and holding their hunting bows. She was among the very first P&Y Regular Members – after Carolyn Zanoni and Margaret “Rick” Cooley – to open the door for other early day P&Y female bowhunters, including Judy Grooms, Carolyn Godfrey, Betty Gulman, Suzy Sherer, Pat Stewart, Michele Leqve, Carol Mauch and Judy Clyncke, to enter.

*Judy Kovar – A late-comer to archery despite the Northern Cheyenne blood coursing through her veins, Judy was just shy of 40 when she shot a bow for the first time. Bowhunting husband Herm later joked that introducing his wife to the sport “created a monster.”  In her first 18 Illinois deer seasons, she tagged 10 Pope and Young whitetail bucks – all but one shot while hunting with both boots planted firmly on the ground. In my book Successful Bowhunters, I called Judy one of North America’s best and most successful whitetail deer hunters. She also tagged record book black bears, a cougar, and a caribou. Her pro-hunting, pro-conservation educational lectures and seminars have reached more than 150,000 school children over the years. Both she and Herm are P&Y Club Regular Members. Judy’s hand-crafted Native American clothing donations to P&Y fund-raisers have generated thousands of dollars for the Club’s pro-conservation, pro-bowhunting efforts.

*Brenda Valentine – Known as “The First Lady of Hunting,” Brenda is one woman who earned her reputation through a combination of family circumstance, self-determination, and good fortune. Equally adept with hunting bows and firearms, she rose from Tennessee poverty where hunting skill put meat on the family table. She shot her first whitetail with a rifle as a teenager but picked up a bow because it gave her the chance to take extra venison for food. She later got a gift bow and arrows, joined a 3-D archery club, and learned to shoot accurately. Honing her hunting skills opened the door to conducting local and area how-to seminars. Soon invitations came for public speaking gigs at Bass Pro Shops and eventually a place on the Realtree, Mossy Oak, and Bass Pro’s RedHead pro staffs. Brenda is also a spokesperson for the National Wild Turkey Federation, as well as featured in widespread outdoor TV programs. I’ve known Brenda for several decades and attest to the fact she’s the real deal – a true role model for ethical, responsible hunters no matter their gender or choice of weapon. Men and women alike quickly realize this is someone who knows whereof she speaks because she’s lived and learned outdoor life lessons outside in the woods and fields.

NEXT MONTH’S COLUMN Bowhunting’s Leading Ladies, Part 2 will spotlight several more outstanding women bowhunters who, in my opinion, have earned a permanent place of honor among the best of the best. A couple have accomplished something no other female archery hunter has ever achieved. Others have been or continue to be inspirational individuals that have shown the way for others to follow as the history of archery hunting continues to unfold.