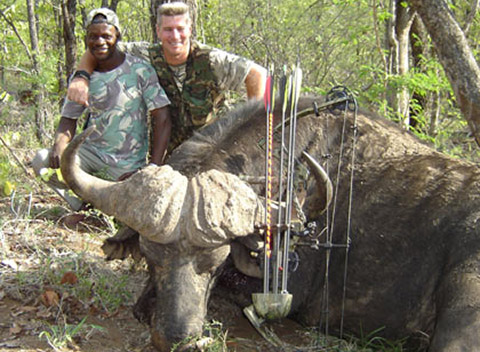 As I drove my vehicle toward Tintshaba Game Ranch, I thought: ‘Wow, I am about to embark on one of my life-long dreams – to bowhunt a Cape buffalo.’ 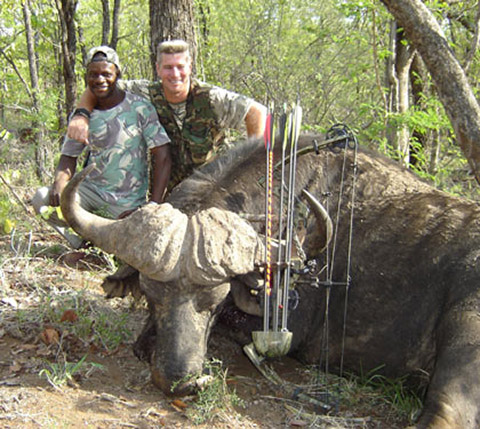 We were received by ranch owner Uncle Horst and PH Marcus and booked into very comfortable chalets. With Marcus, Lucas the tracker and Jacques my friend of many hunts, we were driven into the mopani bush. Tintshaba Game Ranch boasts the Big Five as well as numerous plains game species and other carnivores.

As we were to hunt on foot for most of the time, I want to mention that the temperature in this area is never below 35C in November with very high humidity content. Most of the time we were there it was closer to 40 degrees. To say that the walking-and-stalking was extremely uncomfortable is putting it mildly, but bowhunters don’t cry!

To locate a cape buffalo group was fairly easy, because it had rained the previous night and the buffalo had cut a large swath through the soft sandy ground. Once we located their tracks we felt we could approach them from downwind on foot to within 30 metres.

Eventually, we located a herd of approximately 35 cape buffalo with a large, old bull among them. I was using my Bowtech 100-pound compound bow and Gold Tip arrows with inserts. Tipped with the 240-grain Big 5 broadhead, the arrow weight was 890 grains. Johan Lottering of Tawkhaw Manufacturers specially made these two-blade broadheads for me for this occasion. At a speed of 245 ft/sec, this combination generated an impressive 119 ft.lbs of kinetic energy.

The large bull was standing quartering away and my rangefinder indicated 35 metres. With the cacophony of sun beetles ringing in my ears, I drew the 100-pound bow. It felt strangely easy to do. Everything else was perceived much clearer than normal – sight, smell and sound. I suppose it was the adrenaline rushing through my body.

As I settled the sight pin on a spot just behind the shoulder crease, a buffalo calf stepped between the bull and me, blocking my shot. I relaxed the tension on the bow and slowly moved to my right to try to get another clear lane through which to shoot. I moved about eight to ten metres to the right before I had another clear shot. By this time my adrenaline levels were going through the roof and, not taking another distance reading, I drew again and placed the sights on the bull, which hadn’t yet moved. As soon as I released the arrow, I knew there was a problem.

The heavy arrow flew straight on course, but dropped below the chest and between the front legs, sticking into the soft sand two metres behind the bull!

I turned around and said to the PH: “Missed, too low!”

With sinking hearts we approached the spot were the bull had been standing and checked the arrow. There was no blood on the shaft, only a small smear on one of the fletches.

We wiled away the time for 30 minutes and then took up the spoor. After ten metres we found the first spot of blood on the ground. This was turning into a nightmare. Everything that should not happen was happening. A wounded buffalo bull in the thick mopani bushes and to top it all I knew that it had not received a killing shot. The shot was too low and the amount of blood on the ground was pitifully small. No blood on the shaft meant that only one tip of the broadhead had cut through the skin. The wound could be nothing deeper than 15 millimetres at most. We followed the blood trail for another 100 metres before it dried up. After that we saw nothing at all.

Besides the fact that it is extremely difficult to follow a spoor that has been mixed with 35 other cape buffalo, by this time the herd was properly spooked because we followed them constantly. It was also getting dark and we were very tired.

That night I was depressed to the point of going home.

The next morning we discussed the previous day’s events and came to the conclusion that the bull would not expire. The owner, of German origin, told me in no uncertain terms that I had to find my buffalo and kill it as I had already paid for it. Of course, I had to pay because the hunting rules states that if a drop of blood is found, the full amount must be paid for the wounded animal. I have the same rules on my own game ranch. In retrospect, it was these words of Uncle Horst that galvanised me back into action, together with the logical reasoning of my friend Jacques.

What transpired over the next two days is very difficult for me to put down on paper as it was a mixture of emotions that ranged from utter despondency because we could not find the particular herd that my bull was part of, to elation at eventually finding the herd only to drop down in the dumps because I could not get a proper shot at him. Considering the walking-and-stalking in the unusual heat and strenuous circumstances, trust me – things were difficult!

On the third day we decided to leave my bull for the time being and spend the day hunting another buffalo bull for Jacques to hunt with his .375 Ruger no 1 rifle.

We found a good bull for him late that afternoon and everything went well. At the shot the animal ran for 100 metres and after a couple of minutes we heard him go down. We followed up and he gave the bull the coup de grace. Everybody was happy and after an impromptu photo session, we loaded Jacques’ bull and retired for the day.

The next day was Friday and I had high hopes. By 5:00am we were back in the bush, looking for my buffalo. I could see that the trackers were more impressed with the rifle hunter than the bowhunter because of the successful conclusion of the previous day’s hunt. The day did not yield any results, however, other than to confirm that my bull was with his herd and to sap our physical and mental strength even further.

On Friday evening I decided that the following day would be the last I would spend looking for the buffalo. After four days on his spoor in 5000ha of bush, things were becoming a little too much to handle, even for this bowhunter. Jacques had to return to his business and family responsibilities on the Friday evening so Saturday was my last chance. I  arranged for a “brother” of mine, Renier to accompany me on the last day of the hunt.

So it was at 5:00 on Saturday morning that Lucas the guide, Renier and me were standing next to the bush landing strip of Tintshaba Ranch. Etienne informed us of the location of all three herds and that they were still bedded down.

We immediately moved to the area where we thought my bull would be. It was about 6:30 when we spotted the herd approximately 40 metres away. We saw two young soft-bossed bulls, but no sign of the old bull. Lucas and I were still contemplating where he could be.

Then Renier hissed: “There he is!”

The bull was hidden behind a clump of bushes, standing 15 metres away from us. As he moved out, Lucas confirmed that it was the bull we were looking for.

As I write this, my flesh is covered in goose bumps just remembering and reliving the experience. The bull kept walking slightly away, ignoring us completely. When I ranged, he was 20 metres away.

I set the sights on 25 metres and drew, praying that the bull would stop and turn. After a couple of metres the bull did stop and turn perfectly broadside and looked at me as if I owed him money. The sighting pin settled on his left front leg, one third from the bottom. As I released the arrow, I knew it was the perfect shot (just as I had known that my first shot at this bull had been a bad shot).

The Big 5 broadhead took him exactly where I was aiming, right through the heart. On impact the bull jumped straight up in the air and ran for 10 metres where he stopped and stood on widely splayed legs.

Only the fletching and two inches of arrow shaft stuck out on the entry side. The broadhead was embedded in the shoulder bone on the opposite side (I had to remove the broadhead with a pair of pliers afterwards). Two minutes after I took the shot, the buffalo suddenly fell to the ground and in the process dislodged a three-inch mopani tree right out of the ground. Another three minutes and he gave the first of three mournful death bellows. At the last bellow, the rest of the herd that was standing around him moved away as if they knew he was dead. They probably did know.

Never before in my life had I had heard such a mournful sound and I will never forget that final death bellow. To try to describe the emotions that flowed through me at that stage would be futile as they varied across the whole spectrum and probably some unheard dimension as well. I would rather try to sum up the mistake and some of the things we did correctly to eventually get my buffalo:

The first wound on the bull’s brisket was almost fully healed and only a small scab remained. The horns measured 36.5 inches and the shoulder mount trophy will find a cherished place in my of trophy room.

No Tractor? No Plow? You Can Still Plant A Food Plot.

No Tractor? No Plow? You Can Still Plant A Food Plot.