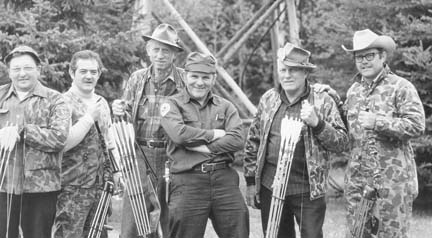 An unusual-looking bow sat in the corner of Fred Bear’s office in Grayling. He had taken one look at it when it arrived at the office and dismissed it. “Who’d ever want to buy a bow looking like that?” he asked.

The bow joined many others that had been sent to Grayling during those years from inventors who thought they had discovered the next giant leap in bow design and function. Many, like this one, were really unusual-looking devices. But Papa Bear was having none of it. He was always into the aesthetics and traditional clean lines of a bow that at the same time provided dependable performance. Designing and producing beautiful, high-quality recurve bows was his passion.

Then one day in the early 1970s a famous writer came to town. His name was James Dickey, and he had written a book about archery that had been made into a very popular film of the day titled “Deliverance.” Bear Archery later provided the archery equipment for that film starring Burt Reynolds, Jon Voight and Ned Beatty. Bear Archery’s regional sales manager, Hugh “Hoss” Blackburn, had been the technical advisor on the film during filming on the Chattooga River in Georgia. It was released for viewing in 1972 and it still can be seen from time to time on television and in video rental stores.

Dickey was a professor of English, winner of a Pulitzer Prize, and one of the finest modern poets in the world. He was also a devoted archer. And Fred admired his writing talent, as only another writer can do.

So when Dickey glanced over in the corner of Fred’s office during his visit that day in Grayling and asked “What is that?” Fred knew he had to show him this monstrosity of a bow that he had rejected out-of-hand. He handed the bow to Dickey, telling him that it was a new bow design that someone had sent him.

Dickey picked up the bow, lifted it to the vertical, set his fingers along the bowstring, and pulled back. When the bow hit its let-off point and eased to full draw, he lowered the bow, looked Fred in the eye and said, “I want one for myself, one for my wife and one for my son!”

Going with the Flow

That was the day that Fred knew that he had to get into the compound bow business. However, with his pride as a bowyer, pattern-maker and craftsman, Fred felt that he and his people could improve on the compound bow’s design to make it more attractive and more saleable to the hunting public. And he had a great R&D department in those days to help him develop and flesh-out his ideas.

Bill Stewart was the bowyer when I first started working with Bear in 1966 and was largely responsible along with Fred for the beautiful recurve bows we sold in those days with their exotic imported hardwoods such as shedua, African bubinga, rosewood, and zebrawood. But by the time I moved to Grayling in late 1971 to set up The Fred Bear Sports Club and then the in-house advertising agency, Stewart had moved on.

Owen Jefferey was our head bowyer by that time, and the department included Neil Byce, Sr., Norm Groner, Bob Remick and Jim Helmick on special developmental projects. Gene Ellis was our general foreman. Our old friend from the Grayling days, Orin Pelto, then supervisor of the arrow department, reminded me that “Jim Helmick was the man who came up with the idea of impregnating maple wood with the various colored dyes for bows. Also, he had introduced Bear to injected-molded parts such as the hoods for bow quivers, Weathers® for arrows, and the bubble-packaging system for accessories.”

Helmick and his wife also owned a motel on the north edge of town, and when I first arrived in Grayling I lived there for a number of weeks before moving into a rented cabin along the backwaters of the Au Sable River above the Old Dam.

As our R&D guys worked on the design with Fred on the new compound bow, I began putting together the introductory material and advertising plan while Kelly put together the pricing and marketing plan. One of the fun things about being in advertising is writing copy, creating layouts, and coming up with new names for products. In honor of Fred’s many trips to hunt in Alaska I named our first hunting compound bow the “Alaskan.” And, in keeping with tradition, in our tournament/target line I suggested using our trademarked “Tamerlane” name for our first target compound. Both met with Fred and Kelly’s approval.

Understanding how something as simple as a screwdriver works has always been a challenge for me. So it was out of necessity that I depended on Neil Byce, Sr. for help with writing the instruction, catalog and advertising copy for our first compound bows. Fred happened to be out-of-town with Mrs. B in Florida for the winter during part of this time, as was his custom after he sold the company to Victor, and Neil and I would camp out in Fred’s office where we knew we wouldn’t be disturbed and sit at his desk as we went over the two bows and pounded out how best to describe them. Neil was very patient with me and kept explaining things to me in baby language even I could understand. Then I’d go back to my office and write the copy for the advertising and instruction books. My assistant, Bill Macintosh, was also a big help.

As I said, Fred and Mrs. Bear would spend the winters in Florida with Fred coming up north a couple of times each winter to stir things up at the plant and to keep us all on our toes. In truth, he also missed the northern Michigan winters along with all of his friends at the plant. In between visits he kept in touch via mailed notes, phone calls and tapes. I still treasure a fair-sized box I have of the hundreds of notes he wrote me in those years. And when those days come along when I spend too much time missing him, I get the box out and paw through it, eventually smiling and then laughing at some of the things he sent me.

One of the most enjoyable things about building new archery products is that it is necessary (Fred always said with tongue in cheek)  to take them out into the woods and field-test them. When one can figure out a way to justify taking them to another country to field-test them, it is even sweeter.

In another chapter I cover our involvement with The American Archery Council, a small group that Fred and Kelly helped get started back in the early 60s. Gordon Bentley sat on the AAC in those days representing the Archery Lanes Operator’s Association, and he and I immediately hit it off.

In fact, Gordon and his wife, Mimi, became good friends and they wanted Fred and some of the rest of us to come up to Canada to hunt at their bear camp, Bear Paw Landing, in western Ontario.

So it was that on May 25, 1974 we journeyed first by car from Grayling to Sault Ste. Marie, Canada to catch a flight over to Dryden to field-test our new Alaskan compound hunting bow. Enroute we flew all the way down the length of Lake Superior at an altitude of 26,000 feet. What a beautiful flight. It was a nice, sunny day.

Being enamored with the idea of a “take-down” bow like our successful recurves that Fred had designed and perfected on hunting trips to Africa, we boldly stated in our preliminary advertising material that the Alaskan was a true “take-down” compound bow that didn’t require any special tools for assembly or disassembly.

Bear Paw Landing was a short boat ride from the mainland and a wonderful camp. It was a series of five cabins capable of housing several dozen bowhunters at any one time. After we were suitably settled into our cabin, we started meeting the other bowhunters in camp with us. Naturally, all wanted to meet Fred. Some of the names I jotted down in my little notebook of that hunt are Jerry Dale, Harley Noftsger, John Kolometz, Jim Richards, Tom Lazar, Tom Pucci, Tom Flaugher, and Ed Flaugher.

One of my main goals for the trip was to take photos of Fred for possible use in our next Bear Archery catalog when we would introduce the Alaskan. In those days I used a Nikon F2 camera with a series of lenses ranging from wide-angle to telephoto, with a special lens adapter for the 55mm lens to allow me to get extreme close-ups. And Fred had given me his old Halliburton camera case to store my equipment in and take on my various jaunts. He had also given me the Bausch & Lomb 9X35mm Zephyr binoculars that he carried on his hunts to Africa and India in the ’50s and ’60s, and I still use them to this day.

I wanted informal shots of Fred sitting around fiddling with the Alaskan, as well as shots of him actually shooting the bow. Little did I know until later what a turn of events all of this would be.