Fred Bear And The Compound Bow 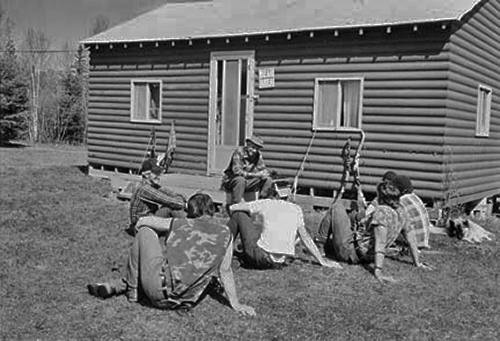 Fred Fails with the Compound

Fred Bear and I first headed for the woods near camp to get some photos of him drawing and shooting the bow. As it turned out, these few photographs were the only official pictures ever taken of Fred Bear shooting a compound bow that were ever published.

As all bowhunters know, when one is in a bowhunting camp, part of the challenge and fun is practice each day before you go out hunting. Naturally, when friends like our Bear Archery group gather, there is a lot of competition and good-natured kidding when arrows are being loosed at targets. In our case, we generally used styrofoam coffee cups for targets since these were more difficult to hit, and our sessions were generally held after lunch. They also provided us with that nice “sweet spot” that all bowhunters concentrate on when they finally arrive at the “moment of truth” with their quarry.

I can remember the look on Fred’s face as he tried time after time to shoot the Alaskan bow there that first afternoon at Bear Paw Landing. He simply could not do it with the proficiency he had shown all his archery life. The reason was simple after he thought about it for a few minutes. His was a snap-shooter’s style. He would rest the arrow on the knuckle of his right hand, not on an arrow rest, and as he drew the arrow back to full draw. The moment it touched his cheek, he released it and was deadly accurate. He had that innate ability to visualize his arrow speeding to the target and he always hit what he was looking at. Thousands of arrows had left his bows over the years, not only winning him championships in target archery, but also world-class big game trophies around the world on his many hunts. And also during the difficult trick shots he did in his early years working the Midwest sporting goods show circuit. But when the Alaskan compound bow reached its peak weight and let-off that Canadian afternoon, it completely threw him for a loop and ruined his shooting style. He never hunted with the Alaskan or any other compound bow. Nor did I ever see him shoot a compound bow again. And that was the reason. Luckily I had that one roll of exposed film with just a few usable photos on it that I would later use repeatedly in our advertising material.

Fred loved to tell stories, not only of his many hunts, but also stories about himself, self-deprecating stories that poked fun of himself. In his later years he even included my turkey hunting misadventures in his repertoire of yarns. In hunting camps he would attract bowhunters like honey attracts a bear whenever he sat down to tell his stories. If you ever had an opportunity to hear Fred speak at a bowhunter dinner, or in a hunting camp you know what I mean. Fred Bear was to hunting what Will Rogers was to politics.

So it was that as he sat on the small back porch of our cabin one day there in the sunshine at Bear Paw Landing, with me hanging out on the perimeter with my camera and lenses, he started to tell his tales. And, of course, he knew I wanted to get photos of him working on the Alaskan compound bow. What better way to do it than as he was telling stories to a bunch of rapt bowhunters gathered on the grass around him? So, between yarns, he began to take apart the Alaskan bow to show these fellows how this was truly a Bear take-down compound bow. Many of them were already familiar with that style of bow that he had designed for their hunting recurves. Taking the bow apart went pretty well, and I snapped away, changing film several times, enjoying what I was doing. But then through my viewfinder I saw the old man’s brows knit up and this serious look come onto his face. I knew we were in trouble. He could not get the bow to go back together again to his satisfaction. And if Fred Bear could not reassemble a piece of archery equipment, we were in deep doo-doo! He quietly set the bow aside, acting as if little was wrong and continued spinning his yarns to the group of listeners around him. I’m not sure they ever realized how very frustrated he had become.

Afterward, when he was safely in the privacy of our small Bear Archery group he called the factory and read them the riot act for claiming the bow was a “take-down” and one that could be taken apart and reassembled without any tools. One of the few times in my many decades with Fred that I ever saw him angry. Needless to say, we never again suggested that the new Bear Alaskan compound bow could be taken apart for travel and then easily put back together again when one reached his hunting camp.

Nevertheless, I had my Fred Bear compound bow photos and built part of our 1975 catalog around them. That was the catalog that we also published in French, German and Japanese translations.

That frustrating day, however, was soon over. Fred was not one to brood upon something like that. It was done, he spoke his peace, and he moved on. He did not carry a grudge. So the remainder of our hunt, there was a lot of fun for all of us. Each of us were dropped off at a baited treestand in the afternoons where we could wait for the wild Mr. Bear to come into our shooting range. And there were both black and cinnamon-colored bears in the area. In the mornings we fished for delicious walleyes on the waters around camp and enjoyed them in late suppers after returning from our bowhunting forays. Fred loved to fish for walleyes.

Some of Gordy’s bear blinds were as much as 50 miles away from camp. The one I hunted the first night out was 24 miles from Bear Paw Landing. And it was 12 1?2 miles off the main highway. I really knew what it felt like to be alone in the woods hunting bears armed only with a bow and arrow. It is a very sobering realization when they drop you off at your blind and drive away, and the isolation suddenly hits you. You are truly an intruder in the bear’s living room.

My notes from the hunt mention a moment that I shared often with Fred and Kelly over the years. It is a simple moment, but really a memorable one. Here’s what I said in my notebook from that hunt.

Breakfast time is the best part of the day, when Fred, Kelly, Hap, Bob and I sit around the table having our first cup of coffee of the day.

Fred’s hair is tousled, highlighting and framing his weathered deep-lined smile. He and Kelly in their flannel p.j.’s with sleep still in their eyes. They’re quiet like me in the morning. Hap is the over-exuberant one, singing and giving us all the needle ’cause we’re still half asleep. Bob Bigler also wakes up slowly.

We have 10 or 15 minutes alone each morning to wake up in each other’s company. Then some of the other people in the camp start coming in for breakfast, including Gordy, who is always a joy to see in the morning with his happy smile and upbeat ways.

A Bear of a Headache

I was lucky enough to be in the right place