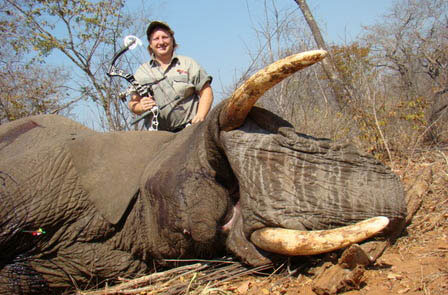 IN LAST MONTH’S COLUMN I listed five women bowhunters whose influence on the sport has inspired others to pick up the bow and go hunting. While nowadays there’s no shortage of camo clad women whose names are immediately recognized by admiring fans who follow their televised adventures, there are many more women who have blazed the trail for 21st century celebrity huntresses to follow.

Spotlighted in my April Column were five women I’ve met and gotten to know well over the past half century: Ann Hoyt, Carolyn Zanoni, Midge Dandridge, Judy Kovar, and Brenda Valentine. I also mentioned other serious women bowhunters I’ve known who added their names to the Pope and Young record books multiple times during the latter half of the 20th century.

Now, in the interest of generating additional discussion on distaff bowhunters whose names have been and are still being etched into archery hunting history, I’m listing six more women I consider deserving of mention. I’m convinced that each of these lady hunters has had or is still having a positive influence on the sport.

*Joella Bates – A successful double-threat as both a world class 3-D target archer and bowhunter, this Tennessee native has left her mark on competitive archery (shooting traditional bows instinctively and compounds with bow sights). Joella holds numerous World Championships as well as national titles. She’s also made bowhunting history in America and Africa, becoming the first woman bowhunter to collect the Dark Continent’s dangerous “Big Five” (African lion, leopard, elephant, rhino, and Cape Buffalo) on a single safari in 2009. Back in the States, she was the first female turkey hunter to collect the bow and arrow Grand Slam of gobblers, tagging Eastern, Merriam, Rio Grande, and Gould’s turkeys. Later, she repeated the turkey hunting feat, taking all four species in a single year (2004). In addition to her continued busy schedules as both 3-D target archer and bowhunter, Joella is a shooting coach/instructor for college archers.

*Carol Ann Mauch – Ask what man owns the oldest Pope and Young World Record listed in the Club’s records and most longtime bowhunters will correctly say, “That’d be Mel Johnson, whose giant whitetail buck was killed way back in 1965. Scored 204-4/8 inches and is one of the largest whitetails ever killed.” But ask which woman holds the longest existing bow and arrow World Record and it’s likely few would know that it’s Carol Mauch. Her huge Quebec-Labrador Caribou bull was arrowed 34 long years ago and wore antlers scoring 434 inches. Carol and husband Dick Mauch, close friends of the legendary Fred Bear, live and hunt deer and turkeys on their Nebraska Plum Creek Ranch, but have bowhunted far and wide for decades. They’re P&Y Senior Members and this September Dick will be inducted into the prestigious Archery Hall of Fame. Beside him will be his biggest fan, wife Carol, who’s a dedicated and very successful bowhunter in her own right.

*Jan Perry – A diminutive, super enthusiastic California bowhunter, Jan took up hunting after her 16-year-old son, Carlo, was killed in a car crash. Devastated by the loss, she felt she couldn’t go on with life until eventually finding peace in the same forests where Carlo had bowhunted blacktail deer. Vowing to take a buck in memory of her son, Jan learned to shoot a bow and killed her first buck in 1996. Quickly addicted to the sport, she has gone on to arrow more than 150 big game animals including deer, bear, elk, and bison, along with dozens of wild turkeys and other small game. She’s also a certified archery instructor, Bowhunter Ed instructor, hunting guide, and author of bowhunting columns and features. Affectionately known as the “Lady Bowhunter” to friends and followers, Jan drives a pickup truck with that title proudly displayed for all to see. “I’m living an unbelievable adventure,” she says. “My precious son is the reason I’m a bowhunter, and I’ll be forever grateful to him for giving me back my life.”

*Michele Leqve – As if her career as an airline flight attendant doesn’t keep her busy enough, Michele also is the proud owner of quality show horses and a regular award-winning presence at equestrian competitions. Besides her travels for work and horse events, she’s a very successful bowhunter who since 2006 has chalked up an impressive array of big game, including whitetails and mule deer, black bear, caribou, pronghorn antelope, and polar bear. Overall she’s tagged some 75 big game animals with more than 20 of her trophies qualifying for the P&Y records. She’s based on a Minnesota farm she shares with her avid bowhunter-husband, Jim. Together they’ve hunted across the U.S., Canada, Mexico, and South Africa. A loyal Associate Member of the Pope and Young Club, Michele mentors women and youngsters who are interested in archery and bowhunting. She’s written numerous feature articles about her hunting adventures for BOWHUNTER Magazine and other hunting publications.

*Anna Vorisek – This hardy Alaskan took up archery at the suggestion of her diehard bowhunting husband, Ken. After honing her shooting skills, Anna’s first bow kill was a paddle-horn bull moose taken for the family freezer. Her interest piqued, she accompanied Ken on his big game adventures in quest of the Super Slam and soon was hooked on bowhunting. Inspired by witnessing Ken’s success tagging a ram from each North American wild sheep species – bighorn, desert bighorn, Dall’s, and Stone’s sheep – she set out to complete her own sheep hunting Grand Slam. Starting with her 2006 Alberta bighorn kill (with the snowy mountain temperature -25) and ending with a 2010 Dall’s ram, Anna became ovine history’s first female Grand Slam bowhunter. Encouraged by Ken and friends, she continued working toward bowhunting’s Super Slam, tagging one animal from all 29 of North America’s recognized big game species. That dream came true in 2016 when Anna took a grizzly bear, forever ensuring her name will be a part of bowhunting history.

*Beka Garris – This young and enthusiastic New Jersey-born hunter is already leaving a mark on the sport she unabashedly loves. Already with some 10,000 loyal social media followers, Beka intrigues people through her inspiring posts, complete with complementary bowhunting photos and videos of her bowfishing and bowhunting exploits, her trapping and taxidermy ventures, and her conversion from modern bowhunting tackle to traditional bows, arrows, and instinctive shooting. “Hunting was a way of life for my dad,” Beka explains. “I started tagging along on hunts at the age of seven, and by age 10 I was a licensed firearms hunter.” She used her great grandpa’s double barrel shotgun to kill her first whitetail and took up bowhunting by age 16. “I was always intrigued by Fred Bear. Inspired, I killed my first deer with traditional equipment on Christmas Day of 2016 – and I haven’t looked back.” Today the mother-to-be lives with her husband on a small Ohio farm. Expect to see much more from and about Beka Garris in the coming years.

For Bowhunting’s Leading Ladies: Part I