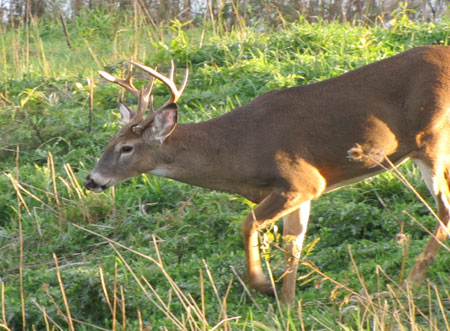 Epizoic Hemorrhagic Disease; a big word but here is what it means. Epizoic means an animal living on the outside of a living animal, usually a parasite. In this case a tiny no-see-um. The word Hemorrhagic means accompanied by hemorrhage. So, this deer disease is caused by a tiny parasitic fly and causes hemorrhaging.

The worst year ever was 2007 when it reached way up north and infected thousands of whitetails. It was a warm dry year and the infestation of no-see-ums reached up into Michigan. The carrier bugs reproduce in the mud alongside ponds. During the dying process, which may be as fast as one-day, deer often congregate near water. The good news is that cold weather shuts them down for the year.

Even in areas of major breakouts, deer populations rebound and unlike CWD, EHD has nothing to do with deer density. In the south, where EHD has been more common, it appears that some deer develop an immunity to the disease.

Biologists currently have no management plan or vaccine to confront CWD or EHD.

VENISON BREAKFAST By 'GIRL IN THE WOODS'