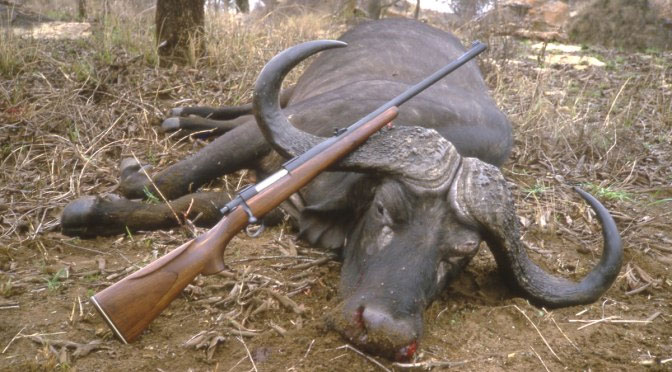 Open sights are fast, but imprecise, but on a dangerous game rifle precision isn’t needed.

As a young and impressionable youth preoccupied with guns and hunting, I heard a lot of “facts” regarding both that I’ve long since learned are untrue. What is amazing, however, is how many survive and are taken as gospel by so many. Now granted, most are held by low information hunters and shooters, but it nevertheless surprises me every time I hear one repeated.

Take the other day, for example, when I got into a conversation with a guy at one of my local watering holes. This guy was a veteran, so he wasn’t exactly a stranger to firearms. In fact, I’m sure he considered himself fairly knowledgeable. Anyway, according to him, a bullet accelerates slightly once it leaves the muzzle, and that explains why it also “rises.” Well, he was wrong on both counts, but his explanation was surprisingly technical, and in some ways intuitive.

He attributed the bullet’s so-called acceleration to the fact that the moment the gasses driving the bullet exit the muzzle, they are traveling much faster than the bullet itself, and therefore impart an added push to it. And being free of the friction of the bore also allows it to “speed up a little.” Well, he was right about the propellant gases exiting at a higher velocity than the bullet, but wrong about all the rest.

As for the idea of a bullet “rising,” however little, once it exits the muzzle, that just doesn’t happen. The moment a bullet exits the muzzle it begins to fall away from the bore line, period. Whether using open sights or a scope, both are mounted above the barrel, so if the line of sight (LOS) is to converge at any zero distance downrange, they must be angled downward to intersect the bullet’s path; otherwise, the bullet would exit the muzzle 1.5 inches below the line of sight (assuming a scoped rifle) and begin falling further away from there.

Using the 7mm Rem. Magnum 150-grain load as an example, its MRT values were .4”, 2.0” and 4.9” for 100, 200 and 300 yards, respectively. That meant that if the gun was zeroed-in at 100 yards, the bullet would “rise” or be .4” above LOS at 50 yards, 2.0” high at 100 yards with a 200-yard zero, and 4.9” above LOS at 150 yards with a 300-yard zero. Actually, the maximum ordinate occurs slightly beyond the mid-range point because the bullet is traveling faster over the first half of any distance than it is over the last half, but in practical terms it’s not enough to worry about. While MRT values were useful, they were not as practical as using “bullet path” relative to a specific sighting-in distance as used in today’s ballistic charts. I believe it was either 1983 or `84 that the ammo companies abandoned the MRT system and began using bullet path relative to a specific sighting-in distance. Depending on the cartridge in question, a realistic sighting-in distance is determined — 50, 100, 200, or in the case of extremely flat-shooting calibers like the 26 and 28 Nosler, or Remington’s 7mm Ultra Mag, 300 yards is a practical sighting-in distance. In any case, knowing that if you zero your rifle to impact dead-on at, say, 200 yards using a specific factory load, you’ll be x inches high at 100, x inches low at 300 is easier to relate to than MRTs.Assuming a rifle zeroed-in at any practical distance from 100 to 300 yards, the bullet first intersects the line of sight somewhere between 20 and 40 yards from the muzzle. Beyond that point the bullet “rises,” but only in relation to the line of sight. The continuously falling bullet then intersects the LOS a second time, which is the zeroed-in distance. Beyond that distance the bullet continues to fall away from the line of sight. It is the use of the word “rise” that brings about the confusion and it started when the ammo manufacturers began using “mid-range trajectory” in their ballistic charts to describe the arc of a given factory load.

Today of course we have much more sophisticated ballistic programs that anyone with a computer can access. By entering a specific factory load, or the bullet weight, muzzle velocity and ballistic coefficient of a handload, we can choose any zero range we want and get the downrange points of impact out to any practical distance. We can even enter altitude and crosswind velocity and it’ll spit out data based on those factors as well.

Before I digress further, however, let’s get back to the popular myths thing I alluded to at the outset. Have you ever heard that a long barrel is more “accurate” than a short one? I will admit I rarely hear that one nowadays, but it was a popular myth back when I was a young boy and iron sights still prevailed, especially among eastern deer hunters. There was even some truth in it because with open sights, the longer the sight radius, the more accurately a rifle can be aimed. The further the distance between the front and rear sight, the less aiming error exists, hence the idea that longer barrels are more accurate than shorter ones. Taking it a step further, equipping a rifle with an aperture or peep sight further lengthens the sight radius; that’s why in any rifle competition requiring iron sights, all you’ll see are aperture sights.

Of course a riflescope completely eliminates aiming error because instead of having to align objects in three different planes — rear sight, front sight and target — all three are compressed to where the reticle and target are in the same focal plane and equally in focus.

As for any inherent accuracy advantage to barrel length, a scoped rifle with a 26-inch barrel can be just as accurate as a 20-inch one, but assuming barrels of the same contour, odds are with the shorter barrel because it’s stiffer. Just check out any benchrest rifle and you’ll see as fat (short) a barrel as the class weight limit allows.

The media can be another source of misinformation. SCI’s Director of Publications, Steve Comus, tells me that back in the `80s at the height of handgun hunting using Thompson-Center Contender hand rifles, he recalls one well-known writer being on record more than once saying that a lever action Winchester or Marlin .30-30, which normally come standard with a 20-inch barrel, were marginal deer rifles beyond 125 yards or so, yet the same writer who often hunted with a 14-inch barreled Contender pistol claimed it made a great deer rig out to 200 yards or more! Somehow the loss of around 150 fps in velocity stretched the gun’s maximum practical range!

No wonder there’s so many myths and half-truths floating about in the gun/hunting world!–Jon R. Sundra

Rattlesnakes – What You Don’t Know That You Should!