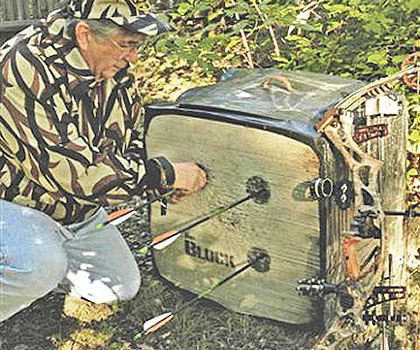 I killed my first buck with a bow in 1956.  Since that day I have taken over 100 whitetail with a bow using every possible combination of archery equipment.  If they made it I have tried it.  In my opinion there are hundreds of combinations of bows, rests, sights, releases and arrows that will make a great bowhunting outfit.  Often the difference between the outfits is minor and boils down to personal preference or your budget.  However, when it comes to broadheads it is a completely different story.

What a bow hunter needs from his broadheads are accuracy, strength, penetration and cutting ability.  You can’t expect any broadhead to produce accurate results out of a bow that is not properly tuned.  The first step is matching your arrow to your bow and doing the proper tuning and practice so you can repeatedly hit the mark at the maximum range you intend to bowhunt.

When shooting my broadheads I use only one criterion for accuracy and that is the size of the group and the tighter the group the better.  Now for the bombshell.  Everyone likes to talk about how their broadheads shoot just like their field tips.  That’s great but personally I don’t care.  I am more interested in how my broadheads group.  In other words if my broadheads shoot one inch to the right and one inch high but they are all hitting the same spot I simply move the sight.  I have never had a broadhead that hit EXACTLY where my field tips hit.  Depending upon the broadhead and the set-up I was shooting some were off by an inch while others could have been off by three inches.  But if they grouped I simply moved the sight.  It is the aerodynamics of the head that causes it to change its point of impact not the weight as many people assume.  If you don’t believe that just take two identical pieces of paper, roll one into a ball and fold the other into a paper airplane.  Give them both a toss.  They weigh the same but they sure don’t fly the same.  The same thing is true with broadheads.

Mechanical broadheads have greatly reduced the flight problems often encountered with fixed bladed heads but I have found there is still some slight flight differences even with the mechanicals.  Judge your broadhead accuracy by the size of the group and not how they hit in relationship to a field tip of the same weight.  It’s the only thing that matters.

The next consideration is the size of the cut.  Personally I have always preferred a three bladed head because for me I could always get tighter groups then when using either a two or four bladed model, plus the three blades also gave me increased size of cut in comparison to a two bladed model.

In spite of my preference for the three bladed models for the reasons stated I along with many others always assumed that a two bladed broadhead would provide the best penetration.  However much to my surprise I was recently involved in some broadhead penetration test that proved that two bladed theory to be totally false.  During the test different model broadheads were all shot from a shooting machine, (to eliminate human error or influence), into a block of ballistic gelatin, which is used to test rifle bullet penetration and expansion test.  The three bladed Grim Reaper mechanical broadhead consistently out penetrated the other heads in the test including the two bladed models.  Although the Grim Reaper penetrated only slightly more then the two bladed models it produced 33 percent more cut due to the extra blade making it the winner by far.

The question is why?  The answer is that the Grim Reaper has the lowest opening force required for any mechanical head on the market resulting in minimal energy consumed on contact.  The bone busting Trocrazor Tip with integral Razors easily slices thru on contact.  The expandable .035 blades stepped down to .020 are not only tough and razor sharp but they have minimal surface area to create drag.  Surface drag is what causes a broadhead to slow down and reduce penetration on both ballistic gelatin or the hair and tissue of an animal.  A thin bladed knife will penetrate deeper then a thick bladed knife of the same weight and the same is true of broadhead design.

When shooting the Grim Reaper my biggest problem was busting up my arrows.  They are definitely the tightest grouping broadhead I have ever shot.  There are a lot of good broadheads on the market and the choice is yours but when it comes down to bringing home the bacon based on my experience my choice is the Grim Reaper.

For more information on Grim reaper broadheads go to www.grimreaperbroadheads.com.