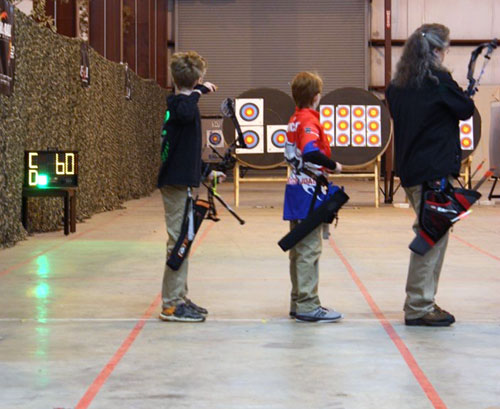 The 2018 USA Archery Indoor State Championship for North Carolina was held March 17-18 at Boneyard Archery in Madison North Carolina. The facility was beautiful! Jonathan and Mindy Brown are the owners and opened Boneyard Archery October 21, 2017.  They had been doing custom builds for people in a small shop in their house for 8 years prior to opening Boneyard.  They split their refurbished warehouse in half. One half houses lanes for indoor archery practice and events. The other houses a full 3xD range completes with trees and landscaping. If you look real hard you might even find a dinosaur hiding in the foliage.  There is also a elevated platform to shoot from to practice tree stand shots.

Jim and I joined USA ARCHERY, USA archery is the sanctioning body for the U.S. Olympic archery.  Over the last 25 years we have shot both indoor and 3-D archery but our emphasis has always been 3-D.  The last year that we shot tournaments we were gone 48 weekends and decided to take some time off to get our daughter through middle and high school and focused our time on bringing more people to archery and bowhunting through our outdoor classroom programs.

It had been 16 years since we shot a tournament and decided we wanted to do something a little different and shoot indoor again.  The past year I have been recovering from Cushing’s Disease, at Christmas of 2017 I could not draw a 15lb Genesis Bow that we use in our children’s programs. I had spent a lot of time in the gym doing cardio, weight training and Pilates.  I was determined to shoot again.

We have shot for Mathews Solocam Bows since 1998. Thanks to Corrine Bundy, who we work with at Mathews we ordered a new Z-3 that we could turn down to 30lbs to get me started again.  Jim also ordered a new Z-3 in a lower poundage due to the fact that indoor you shoot 30 arrows in a 300 round the state was two 300 rounds.  You have a start time and at the end of the first 300 round you have a 20 minute break and then you shoot the next round.  The targets were a vertical 3-spot set at 18 meters  (about 20 yards).

My setup is a Mathews Z-3 black with blue string and harness, dampers and monkey tails.  A Quality Archery Design HDX arrow rest, a Sure-Loc Icon-X with Eagle scope.  Carbon Express 3-D Select arrows and a Doinker Power Bar. I shoot a Tru-Ball Copperhead wrist release to complete the set up.  My Z-3’s  name is ‘Kenny Wayne’ after the song ‘Blue on Black’ by the Kenny Wayne Sheppard Band.

For those of you that have never shot a USA Archery Indoor you register by type of bow you shoot, either recurve or compound and in your age class.  Jim and I both shoot the Masters Class.  There are classes from Bowman to Masters Seniors.  Jim and I shoot in the Masters Class which is 50 years old and older and classes for both male and female in each class.  At the event you have 2-4 people in a group so you will have either 2 or 4 target faces on one target.  2 people shoot at a time from your group in your assigned lane.  A buzzer sounds, you have 10 seconds to get to the line, buzzer sounds, you have two minutes to shoot three arrows, the buzzer sounds to end the round.  The next two people in your group steps up to the line, the buzzer sounds, you have two minutes to shoot your three arrows, the buzzer sounds and the end is over. All members of your group go score the target, one person calls the score, 2 people score the cards which there are two sets of score cards and the other person is there to verify the score if there is a dispute a judge has the finally say.  You mark each arrow on the paper where it hit you pull the arrows and return to the line.  A buzzer sounds and the last two people that shot, begins the next round.

It is very fast paced even though two minutes to shoot three arrows sounds like a long time, it’s not.  So even though it is a lot of fun there is a little stress especially when you are so conditioned to walking through the woods shooting one arrow at a time at a 3-D target with no buzzers.

We heard other competitors saying that they had a goal score.  A perfect round would be to score 300 so most shooters were saying they wanted to shoot a 285 or above.  Shooting a perfect score is very hard to do.  Our expectation was to shoot our very best  and to have fun doing what we love, we had no goal score in mind.

After the past year of recovery and not being able to shoot I felt that I had won just by being able to attend.  My goal was to complete the tournament and get all my arrows on paper.

We arrived at 10am checked in and a judge checked the weight on our bows to make sure they were legal, which is below 60 lbs and to check the diameter of our arrows.  We then shot several practice rounds to get warmed up.  The buzzer sounded and the judges went over the rules and explained procedure for arrows in questions, the judges would have the final say.  The buzzer then sounded and we stepped to the line for our first end.