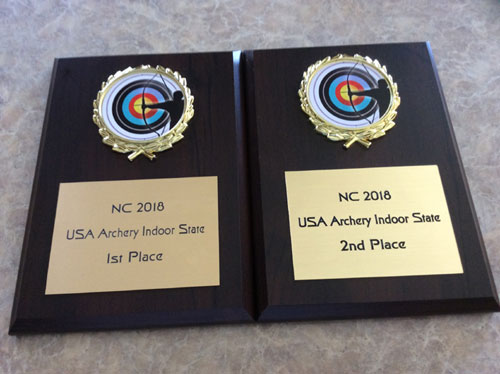 I was up first with one of the men from our group.  The buzzer sounded, a good luck kiss from my coach a “fist bump” and my coach’s last word, “you can do this” and I stepped to the line.  The buzzer sounded and the timer began…I was nervous and excited to be back shooting.  I took a deep breath and drew my bow, and let the first arrow fly, it felt good.  It seemed that no sooner had the buzzer sounded to start it sounded to stop.  It was Jim’s turn next with the other man in our group shooting with him.  I am sure Jim was nervous but he never shows it, he is a machine. Every movement methodical, I have always loved to watch him shoot.  It seems that no matter how long it is between him shooting, a few days or several months he picks his bow up and they are one.  The buzzer sounded and it was the end of our first end.  All four of us went to the target, they were scored and back to the line for Jim and his partner to shoot. Whoever ends the round starts the next one, so you shoot twice in a row.

The ends went by fast and it was the end of the first round.  Jim had shot a 259 and I had a 260.  We took our 20 minute break and went outside to get some fresh air and discuss the first round.  Jim spends the majority of his time focused on me and does not have much time to practice. This being our first tournament in a very long time and me still not close to being 100% from recovering from Cushings Disease he was concerned about how I would physically make it.  He saw I was fine and gave me a few pointers. He figured out what was causing him to be inconsistent and the buzzer sounded for the second round.

Jim was up first and it was game on.  He settled in and was once again in his element.  Some days I think he was born with a bow in his hand, he was on fire.  We also found out that if someone in your group or from another groups shoots your target that you have the option of reshooting that end at the end of the tournament or you have the option of shooting that target with the other competitor’s arrow in your target.  This happened to Jim.  The other shooter was very apologetic and the judges explained the options and left the decision to Jim.  We are 3-D shooters, we are used to shooting with multiple arrows in a target so Jim opted to shoot it.  The arrow that was in his target was centered in the X so it also was like a beacon to aim at.  Jim slipped his arrow in right under the one that was already in his target for a 10.  I knew that I had improved the second round and Jim was only a few down from eyeballing the score card.

At the end of the round the buzzer sounded and the tournament was over.  We did not have to add up our scores at the end of the second round we signed our cards and turned them in, they would be added up by the ladies at check in, recorded and then another group of shooters would shoot Saturday afternoon and on Sunday morning to complete the tournament.

Since the award ceremony would not be until Sunday around 4 we had decided we would come home early Sunday morning, it’s about a 3 ½ hour drive and Jim goes to work at 4:30am and we knew Monday morning would come fast.

Stacey Honeycutt who is the club administrator for the JOAD Boneyard Hawgs were the club that hosted the shoot. She told me that she would let me know the results.  We felt good about our performance.  Jim had been telling me for weeks before the shoot that I would win. He has a lot of faith in me, but I was happy to have completed the tournament with no misses and a decent score.  I was not sure of what my score was on the afternoon round but felt it was better than the first round.  What I was very proud of was my last shot of the tournament was a 10.

We went to the Fisherman’s Galley for some amazing seafood in Eden NC and discussed our day.  We were both pleased with how we shot and talked about what we needed to do to improve.  Jim kept saying I had won. I told him I didn’t think so, the people that shoot indoor are very serious and I had been out of the game for too long.  I told him that he had placed for sure, he blew it off and said he didn’t but the most important thing was that we both felt good about the day and had a great time.

Our discussion on the way home was of course the tournament and what we needed to do to get ready for the N.C. State Outdoor Championship which is in June.  After we got home everything was inspected and put away.  Jim headed to bed and said “I bet you twenty bucks you won, I said Ill take that bet and you owe me twenty if you placed.”

He goes to bed a lot earlier than I do due to the fact he gets up so early.  Around 10:30pm my phone pinged with a text message, it was Stacey Honeycutt with the shoot results.  I lost the bet, I had won my class!!  I almost exploded and held my breath as I read the remainder of the text Jim came in 2nd!  What an accomplishment!  I didn’t want to wake him up, so I quietly entered the room and whispered, “You won the bet”.  He went from sound asleep to standing in the floor. “I TOLD YOU. I TOLD YOU!”  Then I looked at him and said “ok but guess what? You have to give it back because you placed SECOND!”  I think it was after midnight before we settled down and went to sleep. 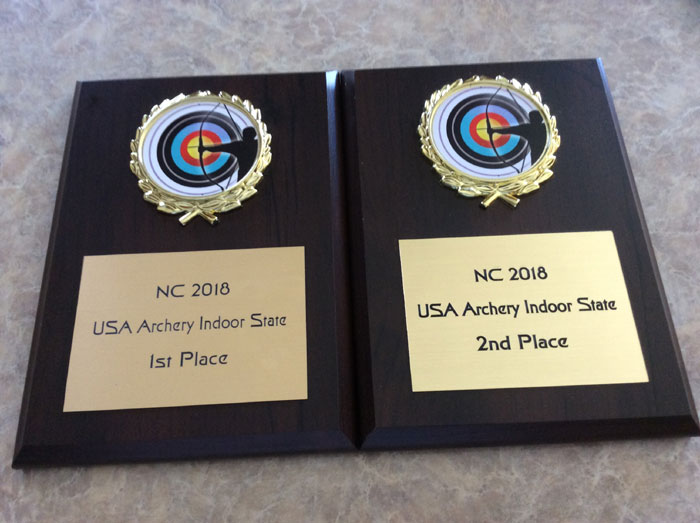 I can’t thank our Sponsors enough for sticking with us and their continued support!