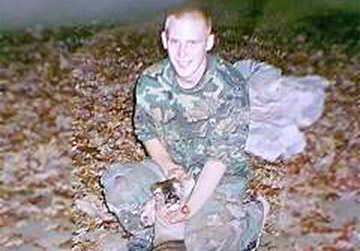 Body Language Of The Whitetail Deer, by Jimmie Desrosiers
There are several aspects that go into becoming a good hunter. Certainly you think of patience, persistence, and knowledge of the patterns of the animals you are hunting. But have you ever considered the ability to read their body language?

Learning to read the deer’s body language cannot only intensify your hunt.. but also help you to understand the animal alot better. Being a bowhunter I have had several opportunities to get close
to deer. If you have ever had to pass on animal you know how majestic the whitetail deer looks as it picks it’s way through the woods. Ever wonder what that deer was thinking? It’s actually not all that hard to read their minds. Read ’em right… and you’re on your way to becoming a better hunter. Now for the good stuff:

Buck with his head held high and his neck hair stiffened.
If you should happen across a buck performing this stance be extremely alert. This is an aggressive posture and it is likely that another buck is in the area.

Buck with his hair standing on end and his ears laid back.
This is one of the most welcomed signs of “deer language” I see. This usually means that another buck is around… but not just any other buck…. a bigger one. Stay alert and search the area carefully.

Doe with a stiff and ridged tail.
Learn how to read this baby and instantly increase your chances of scoring a buck. If the hocks are black, does displaying this trait are in full estrus and is ready to breed. She is almost surely being followed by the dominant buck in the area. He’ll stay back if he feels vulnerable in the area and will pass through a short time after she does.

BUCK with lips curled upward
If you happen across a buck exhibiting the lip curl…. time is not on your side. This buck has smelled a hot doe in the wind and is attempting to pinpoint her location. Pick an ethical shot if one is available and take it before he is gone.

Tail flicking.
If an animal is standing completely still it will flick its tail side to side to signal to any other animals in the area that it is about to start moving again.

Head bobs.
Hunters are often caught off guard by this movement. When they suspect that something is wrong. Deer will often stretch their necks forward for a better look. If they are unable to identify the source of danger they will attempt to trick it. They act relaxed and begin to feed and then shoot their heads back up to see if the object has moved. Any unsuspecting hunter attempting to move has just been busted in the act!

Foot stomping.
By stomping the deer is trying to warn an object and coax an object into movement. It is a proven fact that by the foot stomp a deer is placing a warning scent on the ground to other deer. The experts say that if a deer stomps at you in your stand you should move the stand to another location, but I disagree. I spooked a 7 pt. into stomping 10 yards from my stand for about 20 minutes, then a week later I shot a buck not more than 2 feet from the same spot.

Flagging or tail waving
And last but not least the most often seen part
of deer language. the huge white tail waving as the animal races away. Though the hunt may be over for the day don’t curse yourself yet. Deer will usually only run about 75 to 100 yards after being spooked. Also be sure to look for deer running with their tails stuck between their legs… these are almost always bucks.

These tips on whitetail deer body language can definitely help you out. Next time that deer walks just out of range consider looking at him or her and try to interpret his or her body language…. it just might make your hunt.

BOWHUNTING AFRICA: What You Need To Know