by Brian R. Kightlinger
in Bowhunting Posts, Bowhunting Videos
0 0
A A
1 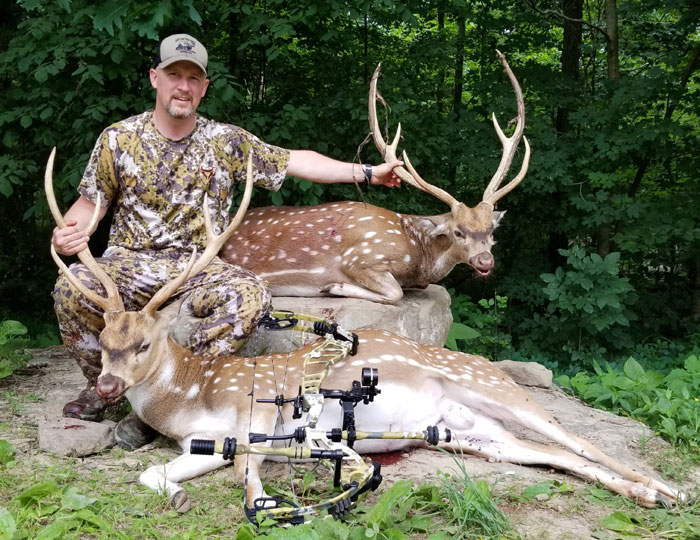 Second day, 30 minutes apart, two great trophy bucks down. This is what success looks like.

The first day of my hunt had been amazing. I was hot, sweaty and hungry but I had seen game and had put myself in position for a shot. As we all know, bowhunting is never a sure thing and today it proved itself again.

I returned to the lodge for dinner, a shower and plenty of fluids. During dinner everyone talked about their exciting day. Two guys had killed nice hogs and everyone had seen some really cool animals. We all watched the news so we could see the weather forecast that was calling for severe thunderstorms before noon. I asked Matt if it was possible for me to get up at dawn and head out to hunt. Without skipping a beat he told me to take advantage of the cool morning as the deer would probably be on their feet when I got out there. I headed to bed anticipating another exciting day and set my alarm for 5 am.

Sleep came easy and I awoke refreshed, eager and ready for another day of bowhunting. I dressed in freshly washed G-Force gear and headed out to the hunting area. The sun was just coming over the trees by the time I got to my spot, the air was again heavy and thick and I was already starting to sweat.

I hadn’t been in my spot for more than five minutes when I saw the Axis Deer sneaking through the draw, heading my way. The bucks were on a mission to find a place to bed for the morning. I was on a mission too that one would not be leaving. Lucky for me I was in the right spot. As unlucky as I was the day before, it seemed Lady Luck had turned today. The group of bucks closed to 45 yards and stopped directly below me. I drew my Altitude and let the pin float on the lead buck’s vitals. I watched as the red  Glory Nock streaked through the shadows and disappeared through the buck.

The group turned as one and headed down the draw.  I watched my buck tumbled to the ground. I couldn’t believe it had all happened that fast. I headed down the hill to retrieve my Zombie Slayer. Covered in blood, the Grim Reaper Hybrid had done its job as expected and was still razor sharp. The buck only went about 70 yards before going down. “Watch ‘Em Drop.” Absolutely.

Reaching the downed buck, I was astonished at how big his body was and how beautiful his coat was. This was truly a magnificent trophy.  I set my camera, took some pictures and then turned on my cell phone to call Matt. Only problem, I didn’t have a signal so I grabbed my bow and headed for my truck to get one. As I passed a large rocky area I saw the 4 Axis Bucks bedded down. One of the bucks was really nice so I decided to put a stalk on them. I had been here before so was hoping my luck would be better this time around.

My plan of attack was to get above the bedded bucks and then close the distance. With the wind in my favor I carefully closed to 60 yards. The rest of my stalk was made more difficult due to the loose rocky soil.  Slight change of plans. I looked around for a baseball sized rock, found one and threw it down into the rocky area where the bucks were bedded. The noise of the rock had the desired effect and spooked bucks stood up. With them preoccupied with the crashing rock, I quickly located the biggest buck in the bunch. He was the only buck that had velvet peeling from his rack. I drew my bow, settled the pin on his vitals and sent the BEA through the air. The Red Glory Nock disappeared where I had aimed as the buck jumped, kicked, spun and charged down the hill. Like my first buck, he didn’t go far before crashing. Chalk another trophy up to Athens, Black Eagle and Grim Reaper.

Axis Deer number two was down less than 30 minutes after the first one. Excitedly, I grabbed my gear and headed back to the lodge to get Matt. When I arrived Matt took one look at the smile on my face and could tell I was excited. We loaded in his UTV and headed back to get my bucks. Together we made quick work of loading them up and getting them back for pictures. After pictures we took the bucks to the cooler and dressed them out. Matt asked me if I was going to head out and try to kill a Black Hawaiian Ram. I thought about it for a minute and decided I was extremely happy with just being one step closer to my *Cazador Slam. The* Texas Slam would wait for another time. What an incredible hunt from start to finish and the accommodations were icing on the cake.

Going to Wilderness Hunting Lodge is probably one of the best decisions I have ever made. My time spent there was relaxing, exciting and a place I want to visit again. If you are looking for a fun hunt, on your own, or with your friends, give Alan Wilson a call or an email. He runs a top notch hunting lodge with an excellent staff.

To find out more please go to: Wilderness Hunting Lodge