by Brian R. Kightlinger
in Bowhunting Posts, Bowhunting Videos
0 0
A A
2 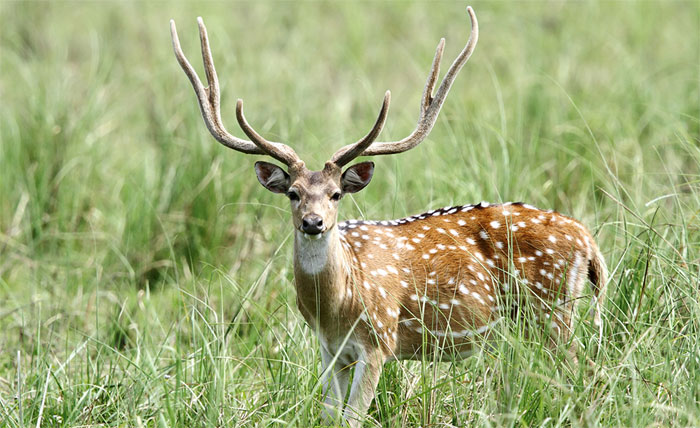 Axis Deer are one of the most pristine of all the exotic deer, with a beautiful six by six horn configuration towering up to 40 inches tall. This is a must for any hunter’s trophy room.

The Wilderness Hunting Lodge offers over 2,400 acres of hunting paradise with 4 comfortable lodges, tucked in the northern hills of Tennessee between Knoxville and Nashville that offers a huge variety of species to hunt. Owner and operator Alan Wilson is also constructing a new building that will allow everyone in camp to eat at the same place.

I arrived at the lodge after a 591 mile drive, a drive made longer due to bad storms in Ohio and Kentucky, from my home in Pennsylvania. Sandy Van De Voorde, who takes care of booking the hunters, emailed me the information including I would be staying at the Razorback Lodge with a few other guests.

Walking into the Razorback Lodge, the great room was decorated with trophy Fallow deer, elk, rams, Aoudad and hogs. This was my kind of lodge!

I located my room and began to unpack. Since the lodge is located in the Central Time Zone I had to adjust my watch and set my alarm correctly so I wouldn’t miss breakfast. I headed to bed and slept well.

I woke up early and headed out for a walk as the sun was rising over the trees. The cool morning air was quickly being replaced with a blanket of heavy, humid air as I returned to the Lodge for breakfast. The food was delicious; homemade biscuits, sausage gravy, bacon and sausage hit the spot. Matt, one of the guides met with everyone and discussed the events for the day.

After eating I went to my room to dress for the day. The weather was calling for temperatures in the 90’s with plenty of humidity so I put on my Ryno Skins to protect me from ticks and then pulled on my G-Force Evolved Camo. Matt took me to the area I would be hunting and then explained the animals I would see and the terrain I would be hunting. Matt gave me his card, in case of an emergency, and returned to the lodge.

Freedom was the first thought to cross my mind. I had the entire area to myself. I was after an Axis Deer and a Black Hawaiian Ram for my Exotic Slam. My equipment was the usual, my Athens Altitude bow a quiver full of Black Eagle Zombie Slayers, tipped with lethal Grim Reaper Hybrid broadheads.

Making my way into the woods I sprayed down with Nature’s Essence scent control and nocked an arrow. Even though the canopy of the thick trees kept the area cooler than being out in the sun, it was still hot. I took one of the logging roads halfway down the steep draw and was already working up a sweat.

Before long I began to see movement down the hill. I glassed the area and saw some Fallow and Sika deer working the draw below me. I sat on a rock for a while and just watched when I heard movement behind me. Coming down the trail behind me was one of the most beautiful Blackbuck Antelope I had ever seen. With his polished, long horns he was tempting being so close but I let him pass at 15 yards never knowing I was there.

Watching the Blackbuck disappear into the draw I stood up and decided to walk a little farther to see if I could locate the Axis Deer. For another hour I scouted through the area. I watched a Mouflon Ram chase two Black Hawaiian Rams around for a while. I wasn’t quite ready to shoot a ram so I kept scouting. About two hours into my hunt I finally saw my first Axis. I was walking through an area with some rocky terrain when I spotted hard antlers. Looking through my binoculars I saw 4 Axis Deer bedded in some rocks. I watched them for about 20 minutes and decided that I was looking for an Axis Deer that was a little bigger. I climbed a steep draw and headed to a ledge that would allow me to see a long ways. I quietly snuck up to a tree and peered over the edge. About 80 yards away was a beautiful Waterbuck. I watched him for a few minutes and then, to my right I noticed two Oryx walking toward me, another amazing animal.

The Oryx moved closer and just as they were getting to within now range I saw antlers behind a cluster of trees. Through my binoculars I could see 5 very large Axis Deer, bedded down the hill about 50 yards away. I decided that the best plan was to just stay put and watch to see what the deer would do when they got out of their beds. The bugs were getting a little annoying so I fired up my ThermaCELL and in seconds, they were no longer an issue. It was back to watching the Axis Bucks that were beating the heat and humidity in the shade.

The sun was directly overhead and I was really hot and sweaty. I made the decision to call Matt and see if he would pick me up for lunch. He did and I enjoyed meatloaf, mashed potatoes, green beans and sweet tea. I shared with Matt what I had seen during my morning scout and he was excited that I had seen so many different animals. Matt suggested I drive my truck to the hunting area so I could return when I wanted.

After lunch I got in my truck and headed to the hunting area. The display in my truck read 91 degrees but the humid air made it feel much warmer. I parked and headed into the tall trees to locate the Axis Deer. The shade of the trees did bring some relief but it was very humid. I found a great vantage point and sat for over an hour. I watched Fallow Deer with fawns walk in the shadows and a few Sika Deer down the trail to my left that bedded down in the rocks. With sweat pouring out of me I sprayed down again with Essence of Fall and decided to move.

Using the shadows and the hillside I moved along the logging road to the spot where I had last seen the Axis Deer. To my amazement the deer were still in almost the exact same spot. I decided to just relax and watch them for a while before trying to stalk up on them. I took out my video camera and did my best to get some video of the deer. To my right I could see a Waterbuck coming down the trail the deer were bedded on. As he got closer the Axis Deer got to their feet and disappeared into the steep draw. I grabbed my pack and bow and headed over to the next draw.

Watching the draw closely I could see the Axis Deer coming my way. Using a tree to hide my movement I nocked a BEA Zombie Slayer and ranged where the Axis Deer would cross. The range finder read 54 yards and with the deer being downhill I set my HHA sight at 45 yards. The deer got to the opening but never stopped. With my heart racing I walked over to the next ridge where I found them bedded near a bunch of rocks. Trying to decide how to get to closer, I formulated a plan where I would use the wind and trees to hide my movement to sneak in close enough for a shot.

My movements were slow and silent. It took me over an hour to close the distance to 45 yards. The deer had the hillside covering their vitals so I patiently waited for any of the 5 bucks to stand up. Three of the bucks were still in full velvet and the other two had dry velvet hanging from their antlers. Any of these bucks would make a great trophy.

The sun was beginning to set over the trees and the deer were perfectly content where they were. I had moved another 5 yards closer and was just waiting for my shot opportunity. With about an hour of hunting light left and the deer still bedded, I was trying to decide if I should move closer or wait. As I was looking for a quiet path the two Oryx came up the draw and moved toward the bedded bucks. I put my release on the D-loop and waited. The Oryx moved closer and that was too close for the bucks. All five bucks jumped from their beds and headed further down into the draw. I had been so close and so patient and it all went south in a matter of seconds.

To find out more please go to: Wilderness Hunting Lodge