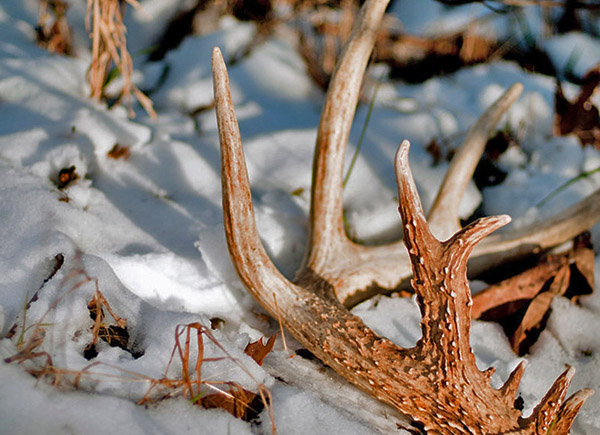 By: Scott Einsmann, courtesy of the ATA Archery Trade Association.

Antlers fascinate hunters, even those who are ardent meat connoisseurs. Interestingly, those handsome antlers fall off the heads of male elk, deer and moose each winter, and regrow in summer. These annual occurrences are triggered by changes in the male’s body. How do these members of the deer family shed their antlers? How do they grow back? Let’s find out. Males of all deer species grow antlers, which are bones made of calcium and phosphorus. White-tailed deer often produce their largest antlers between ages 4 and 7, depending on location and nutrition. Photo Credit: John Hafner

Antlers are bones made of calcium and phosphorus. These tissues grow extremely fast, sometimes as much as a quarter-inch daily. They’re the products of excess nutrition, so the more nutrients a male deer gets, the bigger its antlers can grow. Age and genetics also affect antler growth.

Older deer typically grow larger antlers than younger deer, especially after their bodies reach their maximum size at maturity. At that point, their bodies direct more energy and nutrition to antler growth. White-tailed deer typically reach their prime at around age 5, and often produce their largest antlers between ages 4 and 7, depending on location and nutrition. Antler size usually starts declining soon after as the animal’s overall health begins deteriorating.

The Life Cycle of Antlers All deer species shed their antlers in winter, after a sustained drop in testosterone ends their life cycle. Several months later, the animals regrow their antlers from spring through late summer. Photo Credit: John Hafner

Males of all deer species – elk, caribou, moose, mule deer, Coues deer, white-tailed deer and black-tailed deer – grow antlers. Female caribou also grow antlers, though not as large as those grown by males. All deer species shed their antlers in winter, after a sustained drop in testosterone ends their life cycle.

Several months later, the animals regrow their antlers from spring through late summer. The antlers start as nubs in April and reach their full potential by August. During summer, antlers look fuzzy while growing beneath a “velvet” skin that carries nutrient-rich blood to these bones. At that stage, antlers are soft to the touch and easily damaged.

Antlers harden in late summer and then shed their velvet once they quit growing. The velvet dries and falls away when its blood supply ends. Bucks often hasten the process by rubbing their antlers against trees or brush, possibly because the dying velvet causes an itching sensation. The new antlers are usually complete by early September, well before the rut, the deer family’s breeding season.

You can monitor this months-long process by deploying trail cameras, which provide a fun way to learn about deer in your area. Trail cameras are motion-activated, and take pictures when deer or other woodland creatures trigger their sensors. These devices are available at archery stores.

Meanwhile, bucks and bulls continually rub their antlers during early fall to work off aggression while strengthening their necks for sparring with each other during the rut. Rubbing is often likened to boxers hitting a punching bag to prepare for fights.

Before and during the rut, sparring matches sometimes lead to all-out battles, even death matches. These sparring sessions establish a pecking order, with the most dominant bucks and bulls earning and defending breeding rights. These contests are likely the main reason male deer grow antlers.

After the breeding season, testosterone levels decrease in bucks and bulls, activating osteoclasts, a fancy word for cells that separate antlers from the skull. This process sounds scary, but it seldom hurts the animals. In most cases, the antlers fall off much like a baby tooth losing its roots.

Once antlers hit the ground, they become food for mice and squirrels. They also attract hunters who enjoy walking the woods in search of shed antlers. Fallen antlers tell hunters which bucks and bulls made it through autumn’s hunting seasons. Sheds of all sizes make nice keepsakes, but they can also be used as chew treats for dogs because they don’t splinter like regular bones.

If you’re strolling through the woods and find an antler, now you know its life cycle. And who knows: If you return again next year about the same time, you might find that deer’s next set of sheds, and learn if its owner is growing older and stronger, or older and weaker. The more time you spend in the woods, the more you’ll learn about its creatures by the clues they leave behind.