Gospel from the Book of James 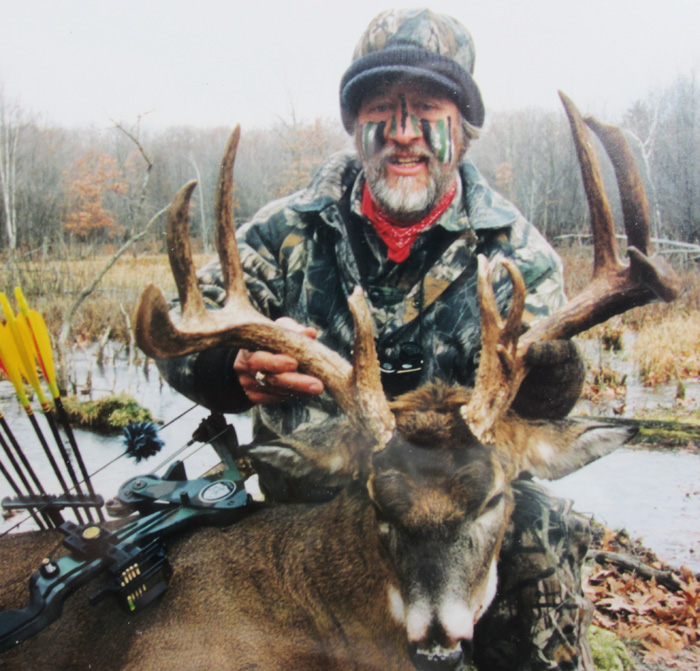 JULY IS A MONTH OF ANTICIPATION for deer hunters. The past season is a memory, fond or otherwise, and opening day is looming on the horizon like a desert mirage, shimmering and inviting. True, some Western deer seasons are already open, but speaking for the great majority of bowhunters, we’ll have to wait another month or more. That makes July a perfect time for thoughtful preparation in making 2018 both memorable and successful. 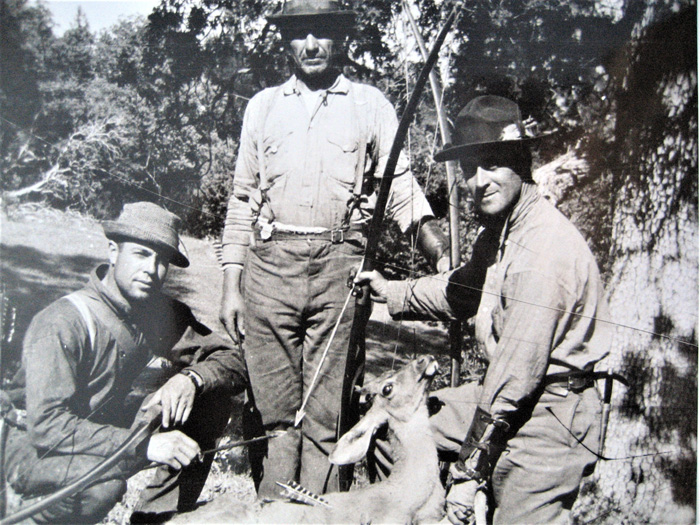 BOWHUNTING HAS COME A LONG WAY since the early 1900s when pioneer bowhunters Art Young, Will “Chief” Compton, and Dr. Saxton Pope built their own longbows, arrows, and broadheads. Regardless, their “primitive” archery tackle got the job done through dedicated practice and hunting ability.

Through many decades of physical and mental preparation, I’ve come up with a short list of reminders to help myself better understand what lies ahead and what I can do to psych myself while being totally realistic about putting tasty venison in the family freezer and another set of antlers on my Memory Room’s wall. Check out my personal reminders and see if they might help you prepare for the coming season.

Following are five hard facts of bowhunting life that I’ve learned, mostly the hard way, through seasons of both elation and disappointment.

Fact #1 – Most hunts will end without a shot being taken. In truth, a majority of hunters do not fill one or more tags during the entire season. To some that’s considered abject failure; to many it’s simply deer hunting – difficult and challenging with no guarantees. As the late, great Papa Bear once explained, “I come home with an honestly earned feeling that something good has taken place. It makes no difference whether I got anything; it has to do with how the day was spent.”

I’ve often said pretty much the same thing in a different way: “If you have to have blood on an arrow and an animal on the ground to consider the hunt a success, you don’t understand what bowhunting is all about.” If killing something, seeing blood, and getting meat are your main goal, go to a shooting preserve where kills are generally guaranteed. 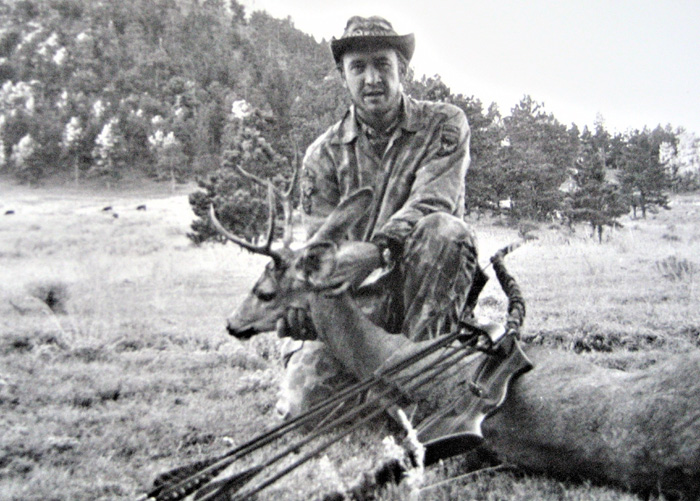 THIS NEBRASKA FORKY fell to a well-placed arrow on a 1971 spot-and-stalk Pine Ridge hunt. A shaving-sharp Bear Razorhead through the boiler room dropped him within sight. Proper practice and shot placement pay off when opportunity presents itself.

Fact #2 – Set a realistic goal and stick to it. If I want tasty venison, I have no qualms about arrowing a tender young doe early in the season. But after half a century of deer hunting, I tend to hunt bigger bucks and that’s my annual goal. Last season, for example, I bowhunted one particular ten-pointer I’d seen on our farm early in the Indiana rut and easily identified by his bone-white rack, distinctive tufts of hair that formed eyebrows, and scars on his right side. To make it more challenging, I pursued him using the recurve bow a late friend owned. 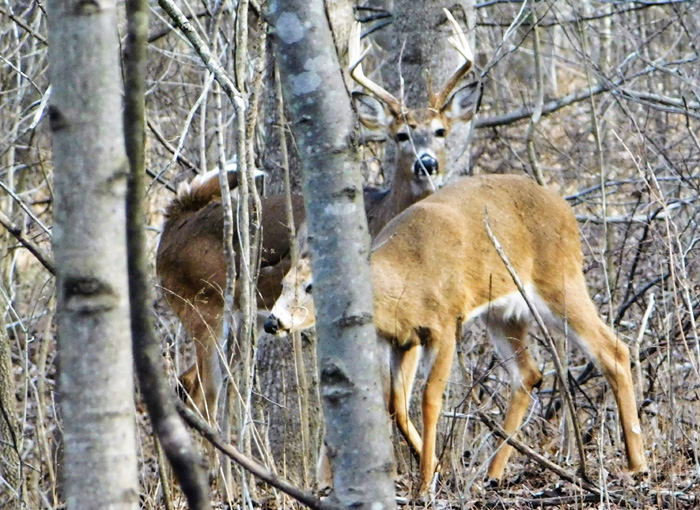 THIS WAS MY TARGET BUCK for the 2017 Indiana bow season. He hung around our farm from the early rut until late January, and I did my best to take him with a late friend’s recurve. Although I had numerous encounters with him, I didn’t release an arrow because I’d set my maximum yardage for stickbow accuracy at 20 yards. I’ll be after him again this fall and winter or find another nice buck to hunt and tag. Can’t think of a better way to honor my late bowhunting buddy.

This bow was given to me by his family who’d asked if I’d hunt with it and fill a tag in my friend’s memory. I practiced instinctive shooting faithfully and decided to limit any shots to no more than 20 yards. During the November rut and after, I had the eight-pointer within easy bow range for my compounds but not once did he present a standing broadside shot of 60 feet or under. Despite not filling my 2017 Hoosier buck tag, I had one of my most memorable seasons and shot dozens of photos of “my buck.” My goal for the 2018 season? The same or a similar mature buck taken with my friend’s favorite hunting bow. For me, that’s a realistic and doable goal. Choose yours!

Fact #3 – Understand deer anatomy and pass up all iffy shots. For much of my career as an outdoor writer (that now dates back to the mid-1960s), I’ve advocated taking only shots that will drive a razor-sharp broadhead through both lungs of the animal you’re intent on killing. Having made and witnessed hundreds of killing shots, I am convinced this is the only bow shot to take for short blood trails and consistent recovery.

“Hit ‘em where they live,” is solid advice that experienced deer hunters have passed along to others for generations. That means, succinctly stated, creating massive hemorrhage within the heart-lungs-liver area to get quick, humane kills. From the first buck I killed in 1963 until my most recent bow kill on our Hoosier farm, all deer I’ve shot through the targeted chest organs dropped within sight or traveled on average less than the length of a football field. It works. Believe it.

THIS OLD SWAMP BUCK fell to a single arrow in the 1990s. I took the 20-shot from a treestand at the edge of a bog as he worked a rub line early one November morning. My Phantom 125 broadhead took out both lungs and he dropped less than 40 yards away. Hit ’em “where they live” and they die quickly.

Fact #4 – Choose the bow, arrow, and broadhead that works best for you! Recurves, longbows, compounds, and self bows are all effective deer hunting weapons. Matched wood, composite, and metal shafts will fly straight and true. Shaving-sharp cut-on-contact and mechanical broadheads can create instant blood loss. But as one famous bowyer once said, “Choosing hunting tackle should be as personal as picking out a jock strap or bra. It’s gotta fit for comfort and the best results.”

There’s truth to that statement, although I always compared it to choosing which truck or car to buy. They all do the same thing and come in all shapes, sizes, and prices. What works best for me or your best hunting buddy won’t necessarily fit you or your needs. That’s why it takes time to test-shoot, examine options and combinations, and then settle on the tackle that works best and feels right for you. Despite what archery shop owners, hunting pals, and magazine ads may claim, you and you alone must keep an open mind and keep searching until you know you’ve found what you want and need for the confidence all hunters need. 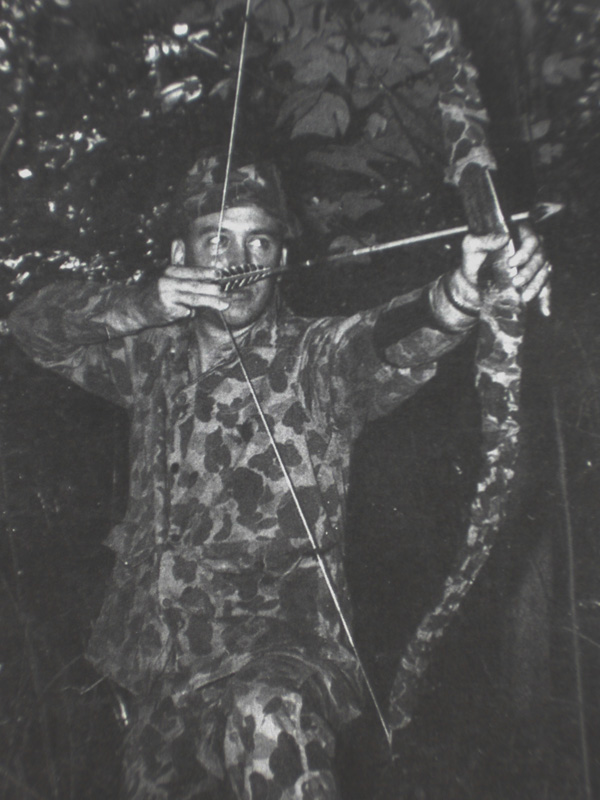 THIS WAS ME 55 YEARS AGO practicing a kneeling shot wearing army surplus camo and shooting a Pearson recurve (notice the camouflaged bow socks) and cedar arrow tipped with a Bear Razorhead. A lifetime of bowhunting experience has taught me what works and what it takes to be ready when a buck steps into the open within good bow range. Investing time in preparing yourself goes a long way two consistent success in the deer woods.

Fact #5 – Like any good Scout will advise you, “Be prepared.” I’ve always taken this to heart because shot opportunities are often fleeting and if you’re not ready, you’re going to miss many chances to fill deer tags. That’s why I practice drawing and shooting accurately while seated, kneeling, crouched, or standing. (It’s also important to practice wearing the same clothing you’ll wear while hunting.) Unnecessary movement saves lots of big bucks. If you’re seated and need to stand when a deer appears in a shooting lane, chances are good you’re stacking the odds against getting the shot. As the season opener draws closer, shoot broadhead-tipped arrows, preferably at 3-D deer targets. 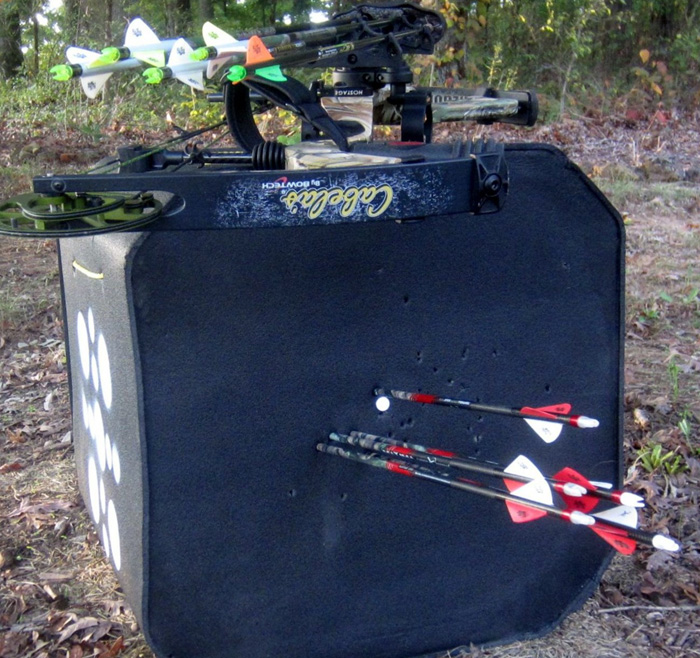 THE SUMMER IS THE PERFECT TIME to make sure your equipment is tuned and ready. Checking bowsights for accuracy and tweaking as necessary can make the difference between success and failure in the field when opening day rolls around. “Be Prepared” is more than a Scout motto.

The off season is the ideal time to develop and hone shooting skills. Deer have absolutely no appreciation for proper shooting form. In fact, it seems they enjoy offering only shots that require some sort of pretzel-like body contortion. That’s hyperbole, of course, but the point is no bowhunter should ignore the very real need to be prepared for any kind of shot that’s offered. That’s what proper practice before deer season is all about. 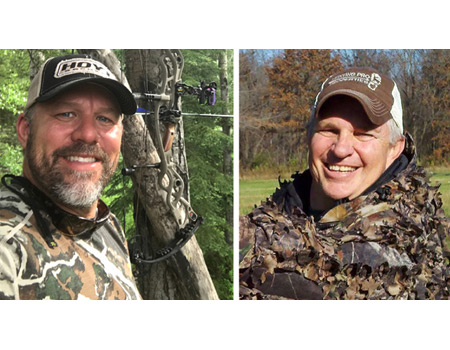 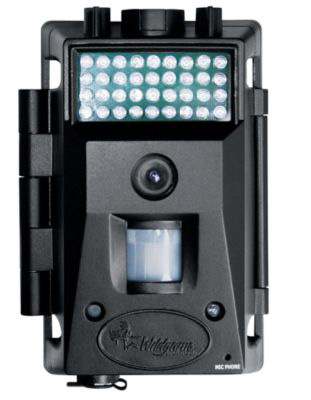 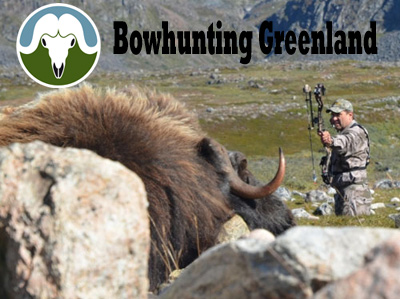