Nebraska – A Handful Of Feathers 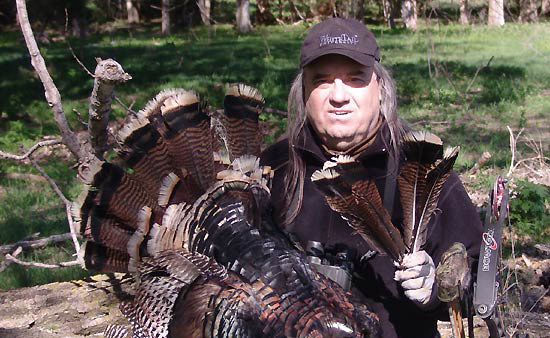 You can never count on wild turkeys doing what they did yesterday.

This morning they flew down from the roost trees and went the opposite way from yesterday, into the hills to the north. I let the blind’s window down on that side and watched them and took some pictures. Absolutely nothing came my direction as they left the roost and headed out for the day.

Later, after two hours of no turkey activity I noticed a lone gobbler come from the woods at the bottom of the hill. It strutted and I got a pic of it.

I made a few medium volume yelps. The gobbler turned and looked my way, a big longbeard. A minute later it walked closer but to my left and then disappeared from my view. I cut at him and heard him gobble several times. He sounded closer.

Bingo. The longbeard came back into view 20 yards away. I made two soft yelps and switched from the camera to the bow. The gobbler knocked another 5 yards off the distance that separated us.

I prefer to use a gobblers legs as a reference for its vitals but the weeds were too high for its legs to show. So I drew and took my shot. The hit looked good.

I definitely like it better if they don’t fly. But he could not get any elevation and I saw him crash land in the woods. There were no other hens or gobblers in sight so I slipped out of the blind and went to recover my gobbler right away. He was laying under a cedar tree, still as could be. About 40 yards from him he suddenly putted loudly and made a very rough take off. Again he couldn’t get any altitude but he flew about 80 yards. I hurried after him and slowed down when I was where I last saw him near the edge of the trees adjacent to a grassy field.

I couldn’t find him.

He probably was in the grassy field. A barbed wire fence separated the woods from the field and I had to walk down it a ways to find a place where I could cross.

Immediately, sticking up in the grass I saw the body of a wild turkey. I knocked an arrow, just in case, and slowly walked toward the gobbler. When I got to it the gobbler flapped its wings and bounced into the air. My instant reaction was to dive at him and grab at whatever I could get hold of. I came up with a grip on part of his tail fan.

Some tail feathers came out in my hand.

But not to worry, the gobbler was down and done.

This gobbler was a 20 pounder with 12 inches of beard. A real nice Nebraska Merriam’s gobbler.

First Big Buck Of The Summer