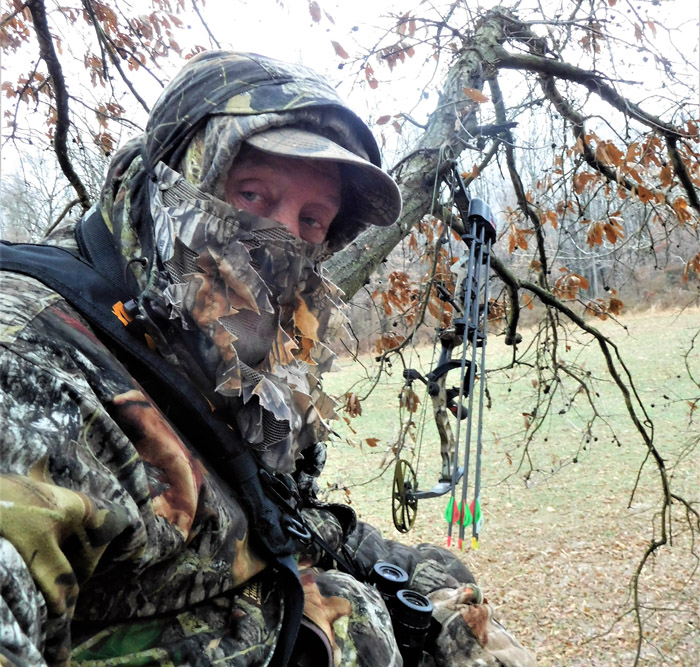 I'LL TURN 78 DURING THE 2018-19 DEER SEASON, and I'm still actively spending lots of hours in trees with elevated stands. This photo was taken last year on the Illinois farm I bowhunt each year with a good friend, Craig Halbig. Lord willing, I'll still be trimming shooting lanes and hanging stands for another decade or two.

JUST GOT WORD from a photographer/bowhunter friend in Wisconsin that her husband fell 20 feet from a tree this past weekend while he and a buddy were hanging stands for the upcoming deer season. She reported he landed on his right shoulder and broke his clavicle, scapula, and six ribs, with a hemothorax and partially collapsed lung. He’s now laid up in the hospital, lucky to be alive, and facing a long, painful recovery.

So what happened? Seems he’d grabbed onto a branch when climbing onto the stand platform. The branch suddenly snapped and sent him crashing head-first to the ground. As my friend said, “It could have been a lot worse.” That’s true enough, but hospital costs and doctors’ bills, time off work, and days lost being in the deer woods only add to the physical pain and emotional distress the guy and his family surely suffer.

It’s a hard reality that a majority of whitetail bowhunters hunt from elevated stands. I’m one of them, having shot my first doe from a treestand in the early 1960s when hunting with boots on the ground was still the norm. Back then, wearing a safety harness or belt wasn’t given a second thought by me or most bowhunters I knew.

I’ve been lucky. Not once in nearly 60 years of bowhunting deer from trees have I taken a tumble and suffered an injury. This despite having had a handful of limbs (and one screw-in tree step) break unexpectedly. Scrapes and bruises, yes. Broken bones or dislocations, no, thanks to the Good Lord and Lady Luck.

I’ve known others not so fortunate. Only last year I wrote a BOWHUNTER Magazine feature titled “Miracle Man.” It detailed the 2008 near-death experience of Massachusetts bowhunter Ryan Jacque, who was hunting alone when he fell from a treestand in a large maple. Ryan suffered multiple critical injuries including a likely skull fracture, traumatic brain injury, badly shattered right femur, and severe optic damage to his left eye. That latter injury eventually cost him his sight in that eye.

Hospitalized November 1, 2008, Ryan was kept in a medically induced coma for three weeks while trauma surgeons performed hours-long operations on his broken leg and other severe injuries. When awakened, Ryan could not speak and had difficulty recognizing his wife, daughters, and other family members. On November 26, he was transferred to a rehab facility where he was treated for several months during which time he learned to talk again, while slowly recovering his mental and physical capabilities. Ryan returned home on January 22, 2009 but still faced outpatient rehab treatments and the painful aftereffects of his accident. Today, 10 years after his fall and lengthy recovery, Ryan is widely recognized as one of foremost pencil artists in America. He still hopes to resume bowhunting sometime in the future.

Another friend of mine, Rod Huff, wasn’t so fortunate. Rod shared the Montana elk hunt where I arrowed my first Big Sky bull, a fat spike, and tagged one of his own. I documented that successful adventure in a 1989 BOWHUNTER feature, “Montana Meat Hunt.” Years after our memorable hunt in the Little Belt Mountains, I got a call from Rod’s brother informing me that Rod was dead. He’d been bear hunting in Minnesota when he failed to return after an evening hunt. Searchers found him at the base of the tree containing his stand. Somehow this veteran bowhunter had fallen and broken his neck while getting into or out of his tree. No one will ever know the details behind the accident or how it unfolded. At the request of Rod’s family, I wrote a BOWHUNTER editorial stressing the need to be extra careful each time you’re climbing into an elevated perch or descending the tree afterwards.

Falls can and do happen, even to experienced bowhunters like Rod and Ryan, each of whom was wearing a safety harness at the time of their accident. Somehow they still fell, but using a Treestand Wingman Emergency Descender System or a Hunter Safety System Treestand Lifeline with a sliding carabiner attached to their harness, could have kept them from slamming into the ground.

IRONICALLY, THE ONLY TIME I’ve ever fallen over my decades os climbing countless trees was a short drop from an eight-foot stepladder. At the time I was pruning dead, low-hanging limbs in the woods on our southern Indiana farm. Janet and I were working on our Back 40 when the mishap occurred. I didn’t fall, really. I’d noticed a small dead limb the size of my thumb and grabbed ahold to snap it off. It didn’t break with my first tug and when it did snap I simply lost my balance and intentionally jumped off backwards to land on my feet.

Bad idea. My momentum carried me backwards onto the seat of my jeans and my back. My head snapped back and bounced off the leafy ground. The lights briefly went out. Next thing I knew Janet was kneeling over me, asking, “Are you alright? Are you okay?”

I was okay, other than the fact I’d apparently lost consciousness for a few seconds. At the encouragement of Janet and our family doctor (whom she’d called to tattle about my momentary blackout), I ended up at an area hospital’s ER. As I predicted, they found no sign of a head injury and only my pride was hurt.

Regardless, I’m now in my late 70s and still climbing trees, hoping to continue for another decade or more. Only nowadays, knowing that falls can happen to anyone, I take pains to always wear fall-restraint gear. You should do the same! Hospitals and graveyards are the last place any bowhunter wants to end up during hunting season.

How to Make Pine Pitch Glue