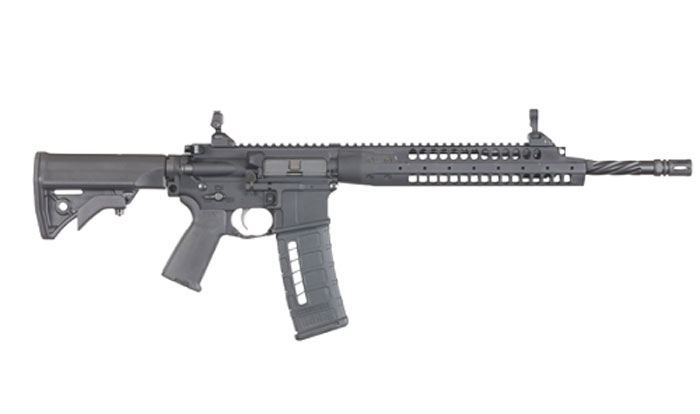 And there’s no shortage of different models and opinions about them on the Interwebs and from guys around the office.

So I started with the question of how and where and why I wanted to shoot a rifle. That determined the best caliber and other features that were important. My budget also plays a role. By starting with the initial purchase price and considering eventual upgrades and accessories all the way through resale value, I’m hoping to at least narrow it down to a few models that fit all my needs.

I want an AR-15 because it’s practical, cool, and versatile for hunting and recreation. I can see myself doing target practice at the range, and competing in, or at least training for, match shooting such as a 3-gun competition. Feral hogs are the only living things that need fear a gun in my hands, although taking a deer isn’t out of the question.

I also like to tinker; swapp parts and customize things to my liking. Since the AR rifle is customizable with modular parts and accessories, I can upgrade over time and on my budget.

I can’t deny that one of the reasons I want an AR-15 is because of FUD – Fear, Uncertainty and Doubt. This uncertainty has been present from the 1994 assault weapons ban to the latest calls for banning AR style rifles. Like most people, I want what I can’t have, or might not be able to get in the future.

What Caliber of AR Rifle Should I Get?

For hunting hogs I used to own a 30-06 semi automatic traditional deer hunting rifle. It had plenty of stopping power, but the heavy recoil and expensive ammo meant I didn’t shoot it as often as I should have to get really proficient. Once down from the tree stand, that rifle stayed in the gun safe until next hunting season.

An AR-15 uses less expensive ammo and has softer recoil so I can shoot lots of holes in paper targets, and hunt smaller hogs and other game using the right type of 5.56mm ammo. With an AR-15 platform I could even swap the modular components to hunt larger game using a heavier round.

But the more I think about it, I don’t want to limit myself to considering only an AR-15. I want to explore what an AR-10 and an AK-47 rifle could offer, and how they match my needs. After all, I’m after an “ugly black rifle”, as the AR-15 was nicknamed, which is more of a style. An AR-10 chambered in 7.62x54mm or .308 will take down anything I’d likely hunt. Cosmetically it’s similar to an AR-15, but functionally it’s made to shoot a bigger round. This caliber will have a kick and it’s expensive, so it’s not a great choice for recreational shooting.

What about the AK-47 round – the 7.62x39mm? Would this be a good compromise? I wanted to compare the recoil, ballistics and cost of the ammo used most commonly in the AR-15, the AK-47, and the AR-10. Based on the bullet ballistics, the AR-15 and the AK-47 ammo fits my intended shooting, so I’ll forget about the AR-10 rifles – for now anyway.

The AK-47 has the lowest cost ammo, with plenty of cheap reloads available, and has more stopping power at close range. But the more I think about it, the more sense it makes to go with the gun that goes with the ammo. In other words, if leaning towards a 7.62×39 caliber, I need to consider the SKS and the AK-47 platforms.

AK and SKS rifles were designed to be mass produced, with interchangeable parts, to spread communism around the world. They are considered pretty reliable because they’re designed “loose” – the opposite of tight tolerances and high quality manufacturing. However, there are many high-end AK-47 rifles that have all the accessory rails, collapsible stocks and other AR rifle features I’m looking for.

What Features of AR Rifle are Important to Me?

Safety and reliability are always first. I just don’t want to own any gun I don’t trust. Beyond that, upgradability is the most important to me. From a trigger upgrade kit to optics to custom parts, I’m looking forward to tinkering and personalizing an AR. I want a brand with a reputation for drilling holes where they’re supposed to go, and in general have no problems with aftermarket parts.

With that in mind, I look at rifle specs to see:

Should I Buy or Build an AR Rifle?

Now that I’ve gone through the thought process, I’m almost comfortable enough to order and AR lower and an AR Upper and start building my own rifle. Unfortunately, I’m not patient enough. Also building one from scratch can end up costing much more than buying a complete rifle. So I’d like to get a complete AR Rifle I can shoot straight out of the box, and then base my upgrade decisions on real shooting experience and my budget. There’s no shortage of AR-15 rifles under $1,000, and AR15s start under $500. Here are some of those entry-level AR-15 complete rifles I compared:

Maybe one of these will be my first AR-15, or maybe I’ll wind up owning an AK-47 rifle that fits the bill. Either way, I’ve narrowed down my choices based on my needs, my budget, and my comfort level.