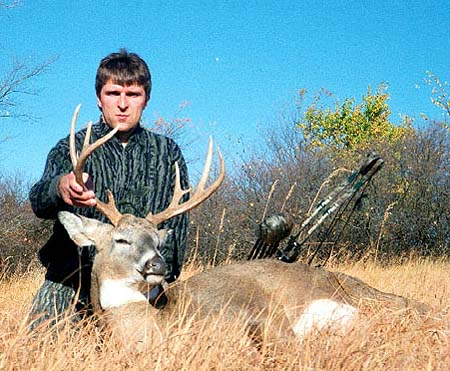 Off Season Practice
By Steve Peters

Take a few extra steps prior to the bow opener so that trophy buck doesn’t catch you off guard!

The sound of pounding hooves and breaking branches shatters the early-morning silence.  A resonating crack of antler against antler startles you awake from a state of mild oblivion, sending a jolt of sensatory lighting down your spine.  Slowly turning around in your stand, you struggle to witness the ferocious woodland brawl.

Momentarily screened by an endless jungle of underbrush, you see a flash of two giant silhouettes in the distance.  Mud and ground clutter fly in all directions – the heat of battle ensues.  As you watch in amazement, the handle of your bow becomes a helpless squeeze toy. Brief departures of reality assault your mind as you sit in agitated-silence, waiting for the climatic end.

Finally, one of the antlered-gladiators submits defeat and the two combatants part ways.  As the victor continues his assault on a nearby sapling, you somehow remember the grunt tube hanging from your neck.  You purse your trembling lips to the reed-end of the call and force yourself to exhale.  In an attempt to imitate the guttural sounds of a rut-crazed whitetail, you nearly hyperventilate.

Without hesitation, the huge buck lifts his head and struts his way towards your stand.  At 18 yards, you stop the multi-tined monster with a soft whistle as you reach full draw.  Lining up your 20-yard pin just below the buck’s midsection, you let the string drop from your fingers – and miss!

Although the events above are completely fictitious, you probably know someone who has experienced the heartache of a missed shot.

It may even be very similar to one of your own moments of despair. I know how it feels to miss a shot.  If you have hunted with archery equipment for any length of time, you probably have felt the same frustration.

It’s even worse when your sights are set on a trophy buck and a well-intended arrow fails to hit its mark.  So, what is the solution?  What can be done to avoid a psychological meltdown at the moment of truth?

I believe it all starts with a serious off-season practice regimen.

Backyard Basics
The summer months provide an excellent chance to hone your archery skills.  The days are long and the weather is mild and inviting.  If you want to better your chances at harvesting a big buck this fall, now is the time to get motivated.  Here are some basic techniques that I use to prepare for those once-in-a-lifetime shot opportunities:

One area that is critical to success is shooting form.  Your ability to achieve consistent accuracy will suffer without it.  There are five areas of shooting form that will be addressed:

1) Anchor Point — Make sure you come to a full draw at the exact location every time.  Choosing an “anchor point” is the first step.  An anchor point is the location where your shooting hand is “anchored” each time you come to full draw.  This is usually the corner of the mouth for finger-shooters or along the jaw line for release-shooters.  You may adjust your anchor point to compliment your particular shooting style.

2) Stance — How you stand while shooting a bow will dramatically affect the flight of the arrow.  You should stand with a semi-open stance with your feet pointing slightly away from the face of your target – or at a 45-degree angle.  If your toes point directly at the target, pulling your bow is difficult and awkward.  It will also force you to shoot “around,” or straight away from your body.  On the other hand, if your feet are pointed too far away, the angle of aim will cause severe string-contact with your bow arm.  Be conscious of your stance during practice sessions and it will soon become second nature.

3) Aim — Aiming a bow, whether sights are used or not, requires good hand-eye coordination and a high level of concentration.  To encourage pinpoint accuracy, try to “pick a spot” while choosing a point of aim.  When shooting at a hay bale or similar target, focus on a certain spot rather than an “area.”  Continue this habit in the field when targeting your quarry.  Draw a bead on an exact spot, such as a distinguishing mark or a tuft of hair.  Concentrate on driving your field points and broadheads through the point of aim while on the practice range.  Repetition of this exercise will train your mind to pick a spot on game animals

4) Release — In my opinion, the act of releasing an arrow is responsible for letting more trophy bucks walk than any other element of the shot sequence.  And, it is certainly an archer’s most difficult discipline to skillfully execute on a consistent basis. Once an arrow leaves the bow there is no way to stop it.  Mature whitetails will usually provide only one shot opportunity.  Therefore, I try to make every shot opportunity count no matter if I am driving arrow after arrow on the practice range or sitting in my favorite stand.

Experimentation with different release methods is the only way to accurately shoot a glove or finger tab.  Some experts say to “roll the string” from your fingers while others say that “snapping the string,” is the way to go.  Trial and error will be the deciding factors.

In an attempt to prevent inconsistent arrow flight, many hunters exchange their gloves and finger tabs for a mechanical release.  If this doesn’t solve your particular problem, it may be deeper-rooted, such as target-panic, an ill-tuned bow or a severe case of buck fever.  If you find yourself languishing in the misery of erratic arrow flight it may be in your best interest to seek professional instruction.  Remember: Time spent on the practice range is the only way to develop a smooth release.

5) Follow Through — The last part of the shot sequence requires a small amount of concentration to pull off.  Finishing the shot, or “following through,” will allow you to achieve higher scores on the 3D range and enjoy shorter blood trails.  Many archers fail to attain consistent accuracy as a result of not developing this skill.  Some flinch at the moment of release or try to watch the arrow as it flies.  Both of these bad habits will cause arrows to stray off target.

The technique used to tighten groups and make double-lung shots on game animals is relatively easy to learn.  Upon releasing the string, practice holding the bow steady until the arrow hits its mark.  Or continue to hold your pin on target until the arrow strikes, if you use sights.  You will see a dramatic increase in accuracy, if done correctly.

Mind Games
Shooting a bow requires both physical and mental self-control.  I once read that it takes 80 percent mental ability and only 20 percent physical ability to shoot a bow accurately.  Some believe that the mind has even more of an influence.  Without an intimate knowledge of body mechanics, we tend to classify the act of shooting a bow as a physical feat more than a systematic thought process of the mind.

The mind is a complex instrument.  It has the ability to perform a variety of complex tasks in milliseconds.  Yet the simplest actions can become instant nightmares.  Take public speaking for instance.  Sometimes words and sentences flow easily from one topic to another, and then a severe case of lockjaw occurs.  Why does that seem to happen at the worst possible moment?  Pressure.  That one word sums up why most people fail to perform in intense situations – like attempting a shot at a monster buck.  So what will counteract the self-defeating effect of one’s mind?

A variety of methods can assist struggling shooters, but one of the quickest and easiest to learn is “visualization.”  Visualization only requires a little imagination and a genuine desire to improve.  Many successful archers utilize visualization techniques to train their minds.  Frequently rehearsing an imaginary shot scenario from beginning to end is a popular method of visualization.  The “if you can see it, you can do it” mentality exemplifies this practice.  Take some time out of your day and try it for yourself.  You may be surprised with the results.  Heck, you may even be contacting your taxidermist at the end of the season.

As mentioned previously, well-developed hand-eye coordination is necessary to enjoy success with archery equipment.  Without this ability, estimating distance, aiming and shooting would be nearly impossible.  Training the mind and body to perform these tasks on demand is what separates those who score on a regular basis from those who continually collect tag soup recipes.

Judging distance is one of the most problematic aspects of shooting a bow accurately.  In most cases, human error is to blame.  Choosing the “wrong” pin, or simply estimating the distance incorrectly, causes the majority of missed shots.

The introduction of electronic rangefinders has eliminated much of the guesswork.  But, even with these modern-day advancements, judging distance is still a challenge.  Try this simple exercise for improving your ability to mentally calculate unknown distances.

Practice “guesstimating” the range to animate and inanimate objects throughout the day.  Pick a “target,” such as a stationary vehicle, your pet or a fence post and estimate its range.  Then step it off to see how well you did.  With a little practice, the ability to effectively judge distance will become less of a test.

The glaring reality of hunting with archery equipment is that missed shots happen.  It seems that no one is immune to this malady.  But, there is a way to reduce the frequency of your moments of humility – practice during the off-season.