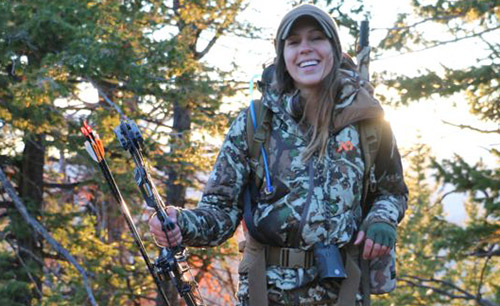 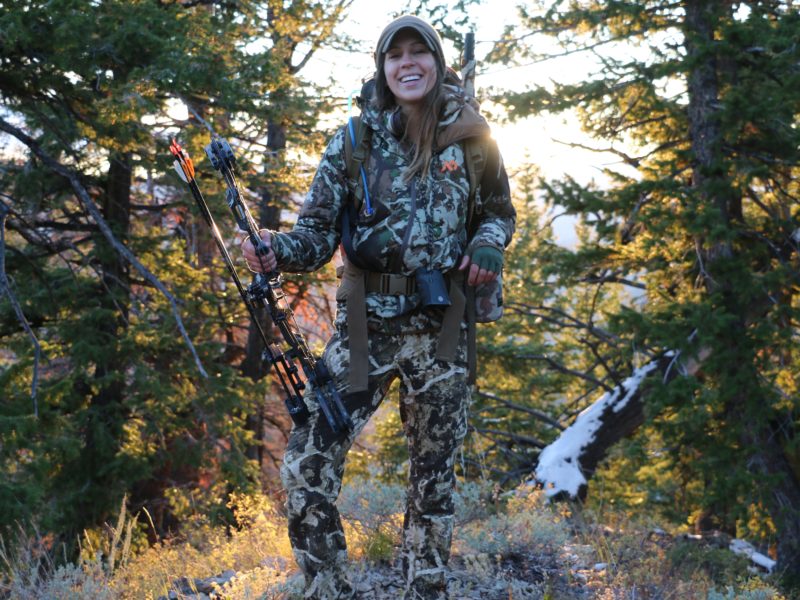 By: Allie D Andrea, “Outdoors Allie”
Allie D’Andrea, better known as “Outdoors Allie” on YouTube, shares her hunting and fishing lifestyle with 100,000 social-media followers. Although she’s a passionate bowhunter and conservationist, she didn’t grow up in a hunting family. She shares her story in this article.

I grew up in one of our country’s most densely populated bowhunting states. With over 345,000 bowhunters and 1 million hunters statewide, Pennsylvania tops the charts in overall hunter density. Even so, I did not grow up hunting.

I spent lots of time riding horses, catching fish and playing in the woods with Mandi, my family’s golden retriever. I loved animals! I didn’t oppose hunting, but I didn’t support it, either.

Allie started to experience sights and sounds in the woods she never knew existed. D’Andrea also learned more about deer, squirrels and turkeys than she ever dreamed to know. Photo Credit: Allie D’Andrea.

My boyfriend Nick, whom I met at 16, grew up similarly and spent autumns playing baseball. He later suffered an injury in college that ended his baseball career, but it opened the door for him to hunt with his uncle. He started spending his weekends in the woods, and I was curious to learn why.

I began tagging along on Nick’s hunts, but not because I was interested in hunting. In fact, at first I didn’t enjoy hunting at all. I found it boring and uncomfortable. But slowly, things changed. I watched more sunrises in one month than I had seen in a year. I experienced sights and sounds in the woods I never knew existed. I also learned more about deer, squirrels and turkeys than I ever dreamed to know.

Things changed after Nick killed a deer while I sat beside him in a two-person treestand. That was the first time I watched an animal die, and it was heartbreaking. It was also the first time I helped field-dress and butcher an animal. I was awed by how much meat we took home. It all went into our freezer to enjoy over the months that followed. In that moment, all the dots connected. What I once found unnecessary, I now found beautiful. The change made me eager to try hunting.

After a few practice sessions at the archery range, D’Andrea felt comfortable and confident in her shooting. The hunts that followed let her observe the natural world, get closer to wildlife, and connect with the woods’ many nuances. Photo Credit: Allie D’Andrea.

I spent my first season in the woods with a crossbow the next fall. I was not familiar with firearms, and a compound bow seemed equally daunting. After a few practice sessions at the archery range, I felt comfortable and confident in my shooting. The hunts that followed let me observe the natural world, get closer to wildlife, and connect with the woods’ many nuances.

I bought my first compound bow soon after that season. It was a junior bow with a widely adjustable draw weight; exactly what I needed while growing comfortable with my shooting. Once winter broke, I practiced outside all summer. I started my Instagram page in June 2015 to share how I fell in love with archery while learning about bowhunting.

I never got to bowhunt with my compound bow that fall in Pennsylvania because I moved to Idaho to work with a hunting-apparel company. After all the preparation and excitement, I was bummed I couldn’t hunt my home state, but I perked up when realizing I would be hunting elk in the Rocky Mountains instead!

Hunting the West’s public lands greatly strengthened my desire to learn and pursue my passion for archery. I also loved the mountains, the adventure and the West’s diversity of game species. Elk, turkey, grouse, mule deer, black bear, antelope … The list never ends!

Bowhunting is a vital part of D’Andrea’s life, and she look forward to sharing it for years to come. Photo Credit: Allie D’Andrea.

No matter the species or the place I bowhunt, it feels special to carry a bow into the woods to pursue animals that will feed you, and your friends and family, all year. Bowhunting connects me to the outdoors, relaxes my mind, exercises my body, fills the freezer, and creates lifelong memories.

I wish I had known all that while growing up, but now I know it’s never too late to start. Bowhunting is a vital part of my life, and I look forward to sharing it for years to come!

RH BLOG: What We're Looking For