RH BLOG: What We’re Looking For 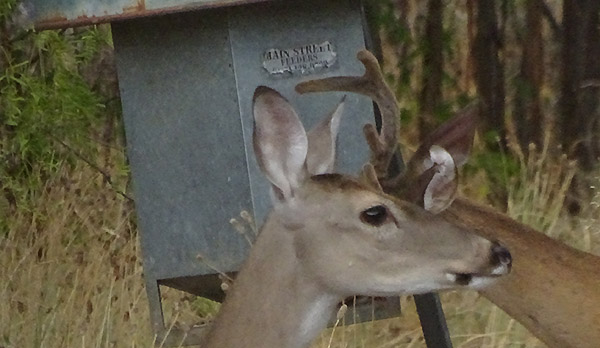 My long time bowhunting buddy Robbie “Big Buck” Cramer came down last week to check his hunting areas and put out a few game cameras. He went to the area we call Double Cross trimmed shooting lanes and got that area ready to hunt in the upcoming archery season. Afterward we visited and talked about our 2018 deerhunting possibilities. Then Robbie spent the night in the big trailer on our lease.

The next morning we drove into town and purchased a dozen bags of deer pellets at Coryell Feed & Supply.

For years, my efforts to provide the deer herd with a supplemental food source would best be described as, “a waste of time and money.” In particular, deer were slow to show any interest in the deer pellets I put out. On the other hand, racoons quickly came out in mass to chow down the pellets as well as get their pictures taken by my game cameras.

When the owners of the sleepy, but low priced, feed store sold the place the new owners were enthusiastic about providing hunting stands and other hunting products. In a conversation with one of the new owners, he asked me if I put out Deer Pellets. I told him I had been, but wasn’t that year due to general whitetail disinterest.

He made a suggestion. Give his recommendation a try and put a game camera on it. I did … and the results were eye opening. The very next afternoon after I set out half a bag of pellets in a sawed off plastic 55 gallon drum container, deer came to it and fiested.

That was two years ago and my Whitetail deer plus AntlerMax experience has been well worth the extra expensie. After all, I want the bucks and does to eat what’s best for them nutritionally

There is more to be said about this but lets return to Robbie’s visit. After buying deer pellets Robbie helped me by filling my deer pellet, gravity feeder that my friend Rick Philippi gave me after he upgraded his to an automatic protein feeder.

That afternoon I stepped into one of my photography blinds that is in the same area where the protein feeder is. My first visitors were a doe and fawn that browsed in my ‘kinda poor’ food plot.

After their brief browse in the food plot they continued to the north and were gone. Next up, was a solo fawn in the woods to the east.

An hour later I noticed a young buck standing still and looking around the area.

Several minutes later he made his move to the deer pellet feeder. A doe was a few steps behind him.

I held the Sony on the deer and a third deer joined in. This one was a doe.

The pellet feeder has 4 openings, one on each side of the square feeding box. In 4 or 5 minutes the deer moved on.

2018 is a big year for the fawn crop. I’ve seen lots of them, more than normal. This fawnbrowsed the food plot late in the afternoon.

And soon after this one passed through.

Meanwhile the momma doe for the second fawn hung out and kept her eye out for problems.

And in the last sighting of the afternoon 2 does and a fawn meandered through the area.

Ok, so we have both good news and bad news. The good news is that the area has a lot of deer this her. More than most, in my opinion. And there are a goodly number of bucks. The majority of the young bucks are 8-points. That is a good thing and a definite improvement over past years.

The not good part is there is a serious lack of mature bucks, so far. That situation should have already changed, judging by years gone by. Surely it’s gonna happen…