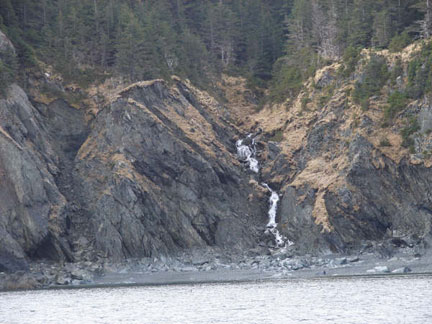 The afternoon of our second day was eventful.  After cruising some distance, Shelby spotted a bear on a peninsula and quickly she saw two more.

Unfortunately, the largest bear was a sow and the two smaller ones were her cubs.  They were off limits to us but we had a good time watching them.

If you look closely in the photo you’ll see one of the bears.  The cubs probably weighed 2-300 pounds.  They were bigger than many black bears I’ve shot.

Later in the afternoon we saw a single boar on the beach, a good one according to our guide, Luke Randall.  We set up an ambush for him if he came around a lake in the direction we thought he would go.  As luck would have it, he went a different direction and we never saw him again.  Three Sitka blacktail deer did walk through our ambush spot at 12 yards.  Too bad it wasn’t deer season.

The only other hunter in camp, a rifle hunter, shot an 8 foot brown this evening.  We’ll see if he has a picture we can post.

The morning of day 3 we cruised a route which is beginning to become familiar to us.  We visited the whale carcass but struck out there.  I should note the carcass is such an advanced state of decomposition that I didn’t take any pictures.  When I first saw it, I thought it was a huge mass of styrofoam, it was bleached out so badly.  We’re banking on the smell travelling over the valley and bringing in some bears.  Time will tell if we are right.

We saw a minke whale this morning.  It’s the smallest whale in the area measuring about 25 feet in length and weighing 6 tons.  Our sighting was limited to two quick moments, much too fast for pictures.

The nights are short when you get in the sack at midnight and get up at 5 am, but that’s what we expected when we took on this challenge.  We can sleep when we get back home.

How to Make a Survival Quiver