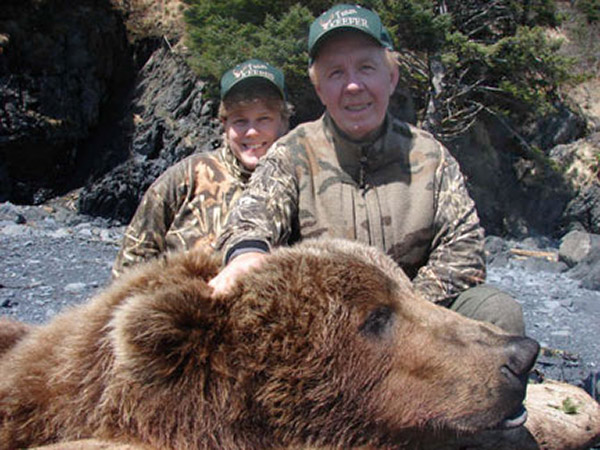 Day 7:  We got an early start today, about 5 am.  The weather was beautiful and the water was slick as a coffee table.  We started seeing bears shortly after leaving camp.  The bad news was that most of them were sows with cubs or juvenile bears and although juvenile bears are legal to shoot, we did not consider them to be the type of trophy we wanted.

Toward the end of the day, we saw a couple of bears on a small peninsula finger sticking out into the bay.  We got closer.  As soon as we got a better look we could tell we didn’t want to shoot these bears. Despite the setback caused by the terrible weather at the beginning of the hunt, we have seen 18 bears.

Next, Luke saw a nice bear by the shoreline.  So we brought the boat to shore and jumped off — and tracked the brown bear into the woods.  A brown bear’s track is huge, maybe 8-9 inches wide and 10 inches long.  The rule of thumb in estimating a bear’s size is to take the width in inches and add the number one to it.  That is usually the size of the bear.  This nine inch track translated into a 10 foot bear.

We followed the tracks through the woods eyeing every bush and tree to make sure we weren’t ambushed as we made our stalk.  Luke pointed out an eight foot circle where the moss had been torn up by a bear.  They do this to cover up their kills.  And this area had the carcass of a fresh baby seal in it.

Now things were tense.  It is not a good idea to be near a brown’s kill, they are protective of them and don’t like to share their kills with man or beast.  Luke, Shelby and I were on high alert as we proceeded.

Nearby we saw blood and entrails on a log and drag marks going up the hill.

Cautiously we moved ahead. Suddenly, we heard a loud wolf-wolf noise, a bear’s warning sound!  I started to put my release on the string … but before I could get it done the bear appeared and charged right at us!

Believe me that was a tense situation. The bear stopped 15 feet from Luke and 18 feet from me!  He looked as big as a house and was furious.  Luke yelled at him and thank God he ran off.  If we could have had just a few seconds to get ready, I might have been able to shoot but that didn’t happen.  It was still a moment I will never forget and I am glad I got to experience it.

Earlier in the week we had found a whale carcass and had attempted a stalk on a nice bear.  Afterward, bad weather kept us from making the trek down to the carcass … until day 8.  With smooth waters the boat trip only took 1 ½ hours.

As we came into the bay, Luke and his dad, Roy, spotted a couple of bears. The wind was in our favor but there was no surf so things were very quiet.  We would have to be careful on this stalk or the jig would be up.  We docked the skiff half a mile from the bears and then moved along the beach as quickly as we could.

Once we got to the carcass we saw one large boar brown bear feeding feverishly on the whale. The boar was even wallowing on the carcass. You can imagine the smell coming off the whale which had been dead for weeks. (By the way, Luke said it was a killer whale, an orca.)

Having rehearsed what we would do, we took our places.  Luke got to my left with the rifle in the ready position.  Shelby was behind me and had the video camera running.  A Carbon Express Maxima arrow with an NAP Thunderhead was loaded and ready on the BowTec bow.

When the boar was 30 yards from us, a sow went behind some rocks out of sight.  We watched the boar for a while because he didn’t offer a good shot.  I wanted either a broadside or quartering away shot.

At last he turned sideways quartering away.  I settled the bright Spot-Hogg sight pin on his ribs and squeezed the release trigger.  The arrow hit in the ribs and angled forward to the offside shoulder.  The boar let out a tremendous growl and staggered.

Incredibly he fell only 15 yards from where he was shot. We measured it later because we were so impressed by the quickness of the kill.  He was dead in seconds.

The sow would not leave the area.  After some yelling and arm waving we got her to leave and we made our way to my trophy.  He had a thick blond hide and a big head.  His weight was in the 500-600 pound range.  Luke thought he probably hadn’t been out of hibernation too long and hadn’t been able to put on the weight his frame would support.  We took lots of pictures before we loaded the boar into the boat.  The ocean was smooth but I wouldn’t have cared if we had 10 foot waves; it was the best ride of our visit.

I want to thank the people at Afognak Wilderness Lodge.  The Randalls are great people and were a pleasure to spend time with.  The mother and father, Shannon and Roy, were very cordial to us.  Luke, our guide, is an excellent guide and an equally good person.  Josh, the other son, also guides and has the same warmth as the rest of the family.  They treated Shelby and I with a lot of attention and kindness and it was appreciated.  If you have an interest in hunting brown bears you should contact the Randalls, they have a website at http://www.huntafognak.com/bearhunt.htm.

Of course, I can’t overlook Shelby who not only did a super job of videoing the hunt but provided a lot of support before and during the hunt.  She’s a real pal and hunting partner in addition to being a super wife.

Deer Movement Study: How Far Do They Go?