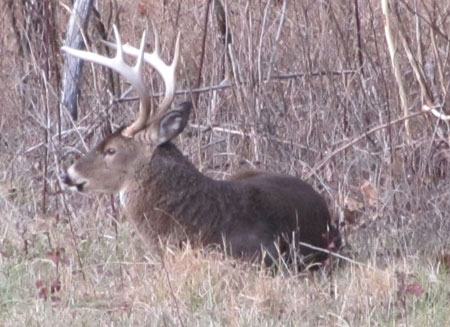 Bowhunting is not a new idea. There is ample evidence that our ancestors were out bowhunting 10,000 years ago, but it appears they were a smelly lot. You either learned to be downwind or you were a skinny bowhunter. Then, just over 3000 years ago, clean bowhunters emerged. Enter…Soap.

Soap is not a new idea either. 2800 years before Christ, in Babylon, someone was making soap by boiling fat with ashes. It was preserved in a clay cylinder and discovered by some archeologist. Before that discovery men were a bunch of grungy knuckle-draggers. Soap is really easy to make. Boil some oil or animal fat with lye and you get a primitive soap.

Take a deep breath and read this bit of science on soap making; Fats and oils are hydrolyzed (split) with a high-pressure steam or heat to yield crude fatty acids and glycerin. The fatty acids are then purified by distillation and neutralized with an alkali to produce soap and water. When the alkali is sodium hydroxide, a sodium soap is formed.

Today soap is still made using the same principals. But the difference between the science used by soap manufacturers makes all the difference. Only one soap manufacturer has developed a soap that rinses out completely and takes the residue and scum down the drain. That soap maker decided to go with a more expensive oil option and chose coconut oil as the base.

Now let’s talk about hunters that want to be scent free. What strategy must we employ to actually reduce our scent footprint? The answer is to remove loose skin cells that normally exfoliate and fall to the ground by the thousands. These smelly skin cells carry human specific bacteria and smell like a human…you. Deer detect these like a bloodhound and avoid you.

The plan is to scrub these loose cells off during your shower. Using Sport-Wash Hair and Body Soap will ensure that no smelly residue is left on you. Then wash your camo in Sport-Wash and eliminate smelly residue in your clothes. Only Sport-Wash can achieve this by using a straight carbon chain configuration to drag the smelly residue out of your camo and chase it down the drain. Most detergents fail to rinse out the residue.

The use of coconut surfactants, used by Sport-Wash soap and detergent achieves the scent suppressant goal by rinsing completely and eliminating the smelly guck left by other detergents. Now you know the answer.

RH BLOG: What We’re Looking For