by Frank Addington Jr.
in Bowhunting Posts, Bowhunting Videos
0 0
A A
2 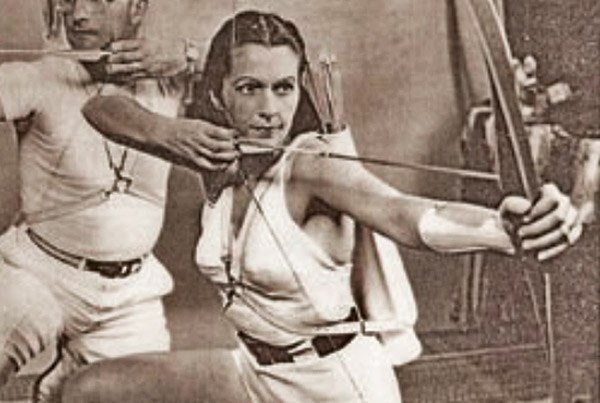 When Ann Hoyt was 16 years old in high school her gym teacher, Edith Russell,  asked if we would like to take archery, which was just being started at the school. Ann said yes and when the archery team won the State and the New York World’s Fair Junior Championship she was, as she told me, “past the point of no return.” Ann Hoyt became one of archery’s legendary and influential personalities. Here is my interview with her.

FA:  Ann, tell us a little about your childhood and family.

I was raised at 69 Fontaine Ave. in  Bloomfield, New Jersey. We had a beautiful park down the street called Halcyon Park. It had a lake with a fountain in the middle. In the winter, they turned off the fountain and put a wooden box around it. I loved to ice skate on the frozen pond. In the summertime, we used to play marbles there too.

I attended Sacred Heart Church on the corner of Broad Street and Liberty Street in Bloomfield.

My parents were Anthony John Weber and Beatrice Sophia Clexton. They met down at the beach in Staten Island at the Cedar Grove Beach Club. My father was a sound engineer for the Thomas A. Edison Company. My mother was a retired executive secretary. She also taught aesthetic and interpretive dancing to children.

During my childhood, we spent our summers at Cedar Grove Beach Club. My grand parents also had a summer home at Cedar Grove. I remember swimming during the summer and diving off of the raft into the warm Atlantic Ocean. On the 4th of July we could see the fireworks on Staten Island. It was a wonderful place

In addition to going to college, I worked part-time at Robin Hood Archery, was a cheerleader and played softball, basketball and hockey. I found time during my crazy schedule to win four individual intercollegiate archery titles for tiny Montclair that eventually went on to claim the national archery crown.

FA:  Tell us about your first job at Robin Hood Archery.

My first archery job came through my continued acquaintance with Bill Jackson. It was only natural that I became involved helping out during free time while in college nearby. With the onset of the war in my senior year, I devoted all my free time helping with the war work on the lathe and simply continued on after graduation. Being only a four man operation at Robin Hood Archery Company at that time, I learned to do every job, made lemonwood bows from start to finish, footed arrows from raw wood to fletching and cresting, made Flemish bowstrings, painted target faces and packing and shipping. My responsibilities grew with the company.

After college I went to work to full time at Robin Hood Archery. “Went to work” is the correct term because I was never really hired. I often jokingly say “I was never hired, but I was fired several times.” My job was waiting on customers, making up the catalog, target face painter, maker of strings and shipper.

In 1971, I resigned from Robin Hood Archery and married Earl Hoyt. The rest as they say is history!

FA:  Early on in your career, you were married to Lloyd Corby.  A lot of people remember you when you were shooting as “Ann Weber Corby.” Tell us about your first marriage.

Lloyd and I met at an archery event. At that time, he was one of the best all-around archers in America. We started dating and were married in 1948 in Boonton, NJ until his demise in 1958. We were both quite compatible because of our love of archery.

We used to do gymnastics together too. He would sit on the ground with his knees up and I would do a hand stand off the top of his knees! He was a bit of a show-off. I remember a time when he went up to the roof of the high school. There was a 3 foot high wall around the perimeter of the roof. He would walk on his hands way up on that roof. Of course, if he fell, he would meet his maker!  One time at a charity event in a Morristown, NJ theater, I placed a grapefruit on my head and walked to the other end of the stage and let Lloyd spear the fruit with an arrow – a la William Tell. That was a switch for me because it was usually me that did the shooting, But that time I acted as the target to prove that my heart and my “head” were in the game all the way.

FA:   When was the first time you had a bow and arrow in your hand?

I was 16 years old and a junior at Bloomfield High School, N.J. during a Senior gym team practice, Miss Edith Russell, my gym teacher asked several of us if we would like to take archery, which was just being started at the school. Miss Russell was one of the great archery coaches of all times.  A few sessions in the archery class and I was hooked. Miss Russell organized our team.  This first group would be the nucleus around which a team would be built and they would be assistants in instructing. However, I would like to point out that “coaching” in those days did not have the technical “finesse” of today. Only the seven steps were taught and equipment was “primitive” compared to today’s bows and metal arrows.

I learned my basic fundamentals under Miss Russell’s vigilant supervision and was introduced to competitive archery while competing in scholastic matches. William H. Jackson (Robin Hood Archery Company) who had taught Miss Russell reviewed the team’s progress and helped to polish our technique. After graduation from high school, I joined the Essex Archers and accompanied Bill and Dot Jackson to many tournaments while in College and thereafter.

With Miss Russell guiding us, the archery team won the State and the New York World’s Fair Junior Championship. I was past the point of no return. Archery became the love of my lifetime. In 1939, the Eastern Championship was my first major win and then on to the NAA Nationals and a sixth place.  That year I was rated 4th by the NAA.

Miss Russell was a stickler for perfection.  When I shot with Miss Russell on the Essex Archers team and when she would move her point of aim, she would move it so little that it didn’t affect anything so I would walk behind her and move the point of aim. She didn’t know it of course. She would have killed me probably.

Point of aim is a round golf ball or fat disc on a peg that you put in the ground some where between where you stand and the target. When sighting over the tip of the arrow you actually hold the tip of the arrow on this point of aim before you let go. This regulates the height of the arrow in flight. Of course you adjust the point of aim(either forward or backward) to affect the arrows flight to the target moving the point closer to the target makes the arrow go higher and thus hit the gold or closer to you and the arrow will be lower. Of course now everyone uses a metal sight attached to the bow and you simply move the sight bar to adjust.

FA:  When and where was your first archery competition?

After Miss Russell formed an archery team at our high school, we began to shoot against other schools. But I was into competition still then because Miss Russell was a member of the Essex Archers as I was.

I had only a year of practice before I went with my high school team to the New Jersey state archery championship. That same year I won the U.S. National Archery Championship and I shattered all existing records.

I won my first Eastern U.S. Title in 1939. At the 60 yard distance, I sank six consecutive arrows in the gold. I did this with a lemonwood bow with horn tips and 5/16 footed wooden arrows with self nocks. Self nocks are when you saw a slit at the top of the arrow and place the bow string in the slit. Hardly equipment with which to set records!

I went on to become a National Archery Champion five times and World Champion twice.

FA:   You have so many but what would you consider your greatest victory on the archery field?

I guess when I won the FITA World Championship.

I was a six time National Champion and National Field Barebow Champion. I was the only archer, male or female, to win both Target and Barebow titles. I was among the first group inducted to the Archery Hall of Fame in 1972 along with Fred Bear, Ben Pearson, Karl Palmatier and Russ Hoogerhyde. I was at the top of my game for 20 years. There has never been another archer on top for 20 years! In 20 years of competition in National and World Tournaments, I’ve finished in first place eight times, second place seven times and third place three times.

I won the Eastern Target Championship fifteen times. I was also a World Target and World Field Champion.  In 1958 I led the U.S. Women’s team to first place in the World Tournament in Brussels finishing second to Carole Meinhart. I repeated this feat again in 1959 at Stockholm where the U.S. Women’s Team again finished first and I won the individual competition.