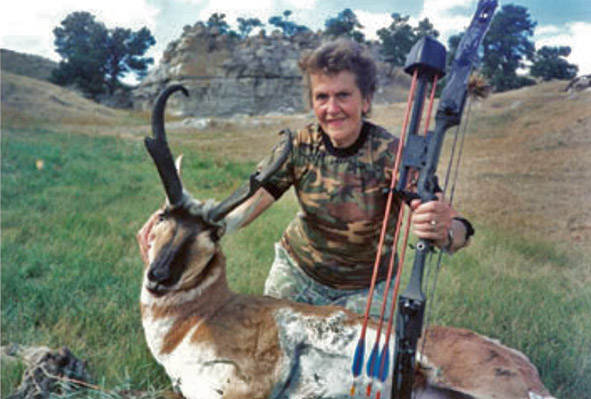 FA:  Tell us about your late husband. When and where did you meet Earl Hoyt?

Because of my employment at Robin Hood Archery, I knew about Earl and the Hoyt Archery Company because we sold the Hoyt Bow at Robin Hood. We spoke on the phone many times. I was married to Lloyd Corby at the time. Hoyt was producing the best tournament bow and it was only natural that I would shoot the best. Earl often stood behind my chair on the shooting line to watch me shoot. He did this for many years. Lloyd was always nearby.

After Lloyd’s demise, several years went by. Earl and I would meet on the tournament field, also as an exhibitor at many trade shows. I don’t recall the year we started dating, sometime in the late 60’s. Earl’s mom Clara had a hard time letting go of her “little boy”. After many messages via fortune cookies, and phone calls, we decided we would marry and eventually celebrated 34 years of married bliss. Earl was the kindest, most generous man I have ever known. Together we made Archery History, he the designer and me the gal behind the bow. We made many records with his bow all over the world. Most top shooters of that era shot the Hoyt bow.

Earl and I had a special song for each other. It was called “Somewhere My Love” and to this day every time I hear it I get misty eyed.

FA:  Tell us about Hoyt Archery.

In 1931 Hoyt Archery Company formed as a partnership between Earl Hoyt Sr. and Earl Hoyt Jr. and the first ad ran in the Ye Sylvan Archer, Corvallis, OR. The ad was for arrows. The business was part-time.

With the war in progress in 1942, Earl Jr. spent little time with the business but Earl Sr. whose construction company (Hoyt Construction) was disrupted by the war was in a position to spend full-time in the archery business.

Earl Jr. resigned from his engineering job with McDonnell Aircraft Corporation in 1946 to go full- time with his own company.

Earl and I were a strong management team for the business and helped further the company’s growth. Earl’s dad died in 1959. His mother was an active partner until 1978.

FA:  Where was it located?

The Hoyt plant was located near the St. Louis Airport. The Senior Hoyts owned a home across from the firm’s parking lot. Earl and I built onto their home with our private home. We lived there until Earl’s demise in 2001.  It was at that time the airport took over our property for a new landing strip and I moved to St. Charles, Missouri.

FA:  After you sold Hoyt Archery to Easton, you started a company called Sky Archery.  What role did you play at Sky?

We sold Hoyt Archery Company, now a giant in the industry, back in 1978, with a ten year consulting contract, later extended to 1991. At Hoyt’s request we continued to build the traditional line (recurve) as late as 1993. To accomplish this arrangement Sky was formed in 1989 and expanded the line to include the traditional Trophy longbow,  The deluxe deflex-reflex Rogue, a high performance longbow (a unique design we formulated in 1957); Eagle, a one piece recurve; Sky Hawk, a T/D hunting recurve; and now the world class Conquest tournament bow that currently holds the FITA World Record.

We formed Sky Archery in April of 1989. We were located in Bridgeton, Missouri which is where Earl and I were living.  We redesigned bows for the discriminating archer in the traditional style. The Hoyt reputation spread with traditional archery. Earl showed his expertise as the world’s finest bowyer. Earl then designed a competitive bow for the conventional Olympic style archer. Once again, Earl became a leader with the Sky bow in Olympic and World competition.

As Earl’s wife, I became his partner both on and off the field. We worked side by side in the factory producing fine quality bows. I worked in all phases of producing the new Sky bows. One could find me late at night in shipping mailing bows to fill all the orders.

We got the name for Sky Archery from the last syllable of the last name of two of our employees names, Ken Preslopsky and Albert Kopesky. So we took the “sky’s” and named our business Sky Archery. Sky Archery was sold to McPherson. I continued to do limited business from my home in St. Charles, MO with Gladys Bauman and Albert Kospesky as associates. The last bow was sold in 2003 and all Archery Artifacts went to the new Archery Hall of Fame in Springfield,  Missouri.

FA:  In addition to your work with Earl at the archery company, didn’t you also do a lot of volunteer work in the St. Louis area?

I used to drive a blue 4×4 with an “I Love Archery” bumper sticker on it, around the middle class area of St. Louis delivering “Meals on Wheels” to people who were “shut in” their homes. I remember an elderly 80 year old woman who had three daughters scattered across the county and had little contact with them. Her husband had died and she was very lonely. She looked forward to the free good meals I delivered to her each week courtesy of “Meals on Wheels”. But more than the meals, she looked forward to talking to another human being.

Then there was a deaf woman who was always waiting by her door when I came three times a week.  Conversation was impossible but just to be able to share the same space with a fellow member of the human race brought sunshine into her day as well as mine.

My next stop was to a blind man’s house. I always cut his meat for him and we would chat while I was cutting. Again my day was made brighter.

An hour and half delivery would take me two and half hours or more, but the extra time it took me to visit with these shut-ins was just as important to me as the food I delivered to them.

I started volunteering for the Meals on Wheels by delivering meals to people in need all over the area in 1985 and also did volunteer work at Shriner’s Hospital. At Shriner’s I pasted the interpretations of the x-ray on to the patient’s cards.

One of my primary concerns at that time  was working and developing a program for the JOAD clubs. I won a Service Award for my participation in JOAD in 1993.

No one can count the hours I have spent as a 20 year volunteer at the Shriner’s Hospital or my dedicated service to Meals on Wheels. Both were number one priorities in my daily life when I lived in St. Louis, MO. I continue to serve with Ann Clark and Allan Martin at St. Margaret Hall in Cincinnati, OH.

FA:  Earl forgot more about bow design that most could ever hope to know.  What was it like living with this great man?

Wonderful! Earl was just so wonderful. We both had the same love and passion for each other that we had for Archery.

We worked together side by side everyday during our marriage. Most days and evenings were spent at the factory. And if we weren’t at the factory you could find us going on hunts, going to tournaments or just practicing out in the field. We had little social life outside of archery.

Earl and I traveled a lot. We went to Africa, Korea, all of Europe, Italy. We loved to collect animal sculptures from all around the world. We acquired quite a unique collection. We took many pictures. It’s so much fun these days to go back and look at our travels together. As time passes, it’s easy to forget how blessed I have been.

FA:  After Earl passed away you sold Sky to Mathews/Genesis.  I visited the factory and they moved Earl’s equipment to Wisconsin.  I got tears in my eyes when I saw this great man’s equipment still being used to produce quality longbows and recurves.  Are you happy to see his legacy and his designs still being used today?

Yes, of course. I  admire Earl’s accomplishments. He was a brilliant and gifted man. Matthews/Genesis agreed to keep the same quality product that Earl had produced.

Earl is the person I admire most in the archery world. Down through the years it has been my cherished privilege and pleasure to have known and married one of the greats associated with our sport.

Besides being the founder, owner and president of Hoyt Archery Company he was an engineer. He developed and held patents to many designs and systems, from dynamically balanced bow limbs to torque stabilizers and many more inventions that improved the quality and accuracy of bows. Earl designed the Pro Medalist line of bows which hold more records and have won more Olympic, world and national championships than any other bow. He had 19 different patents to his name. Nobody knew how to make bows like Earl did and he never received any royalties from others using his patents.

He was inducted into the National Archery Association’s Hall of Fame and the National Bowhunters Hall of Fame for his life-long contribution to archery and bowhunting.  He was a champion archer having won the NAA tournament three times in the Pro Division and many, many other titles.

FA:  I know you have been active in the Diana’s.  You took the largest trophy of all from all the Diana hunts.  Can you tell us about that?

The Diana’s are a group of dynamic women bowhunters who gather annually to hunt and share their bow and arrow memories. It all started in 1986 in a meeting Ann Clark had with Bob Eastman in Las Vegas. They shook hands and Ann Clark was in charge of the invitees. She had to make sure they would all be either writers or personalities write about. There were 14 of us in all.

The Diana’s have hunted 13 states, Michigan more than once. We were accepted in every state and enjoyed many news, radio and media presentations  from the Department of Resources to local archery clubs and schools where we gave demonstrations for local TV programs teaching and answering questions which led to publicity for Archery and women in the field.

Some of my best hunts were with the Diana’s. We hunted all over the United States in Michigan, Ohio, Wyoming, Colorado, Minnesota, Wisconsin, West Virginia, New York, Nebraska, Alabama, Texas, Florida and Illinois. Game was harvested from 8 states. But the most outstanding hunt was when I harvested my Pope & Young antelope.

I harvested a Pope & Young record book antelope on a hunt in Casper, Wyoming back in 1994. The official score was 71″. We were heading back to camp and the buck crossed right in front of our car. I jumped out of the car. I still had my equipment with me because I had just been picked up and took a shot at the buck as it went down the hill so we didn’t see its head until we were at the bottom of the hill. It was 70 yard shot, instinctive without sights.

I have it mounted in my room. I have another right next to it that was Earl’s. Mine is the buck. Earl’s was a female. Earl had his many many years before I got mine and I use to like to tease him and say how much bigger mine was.