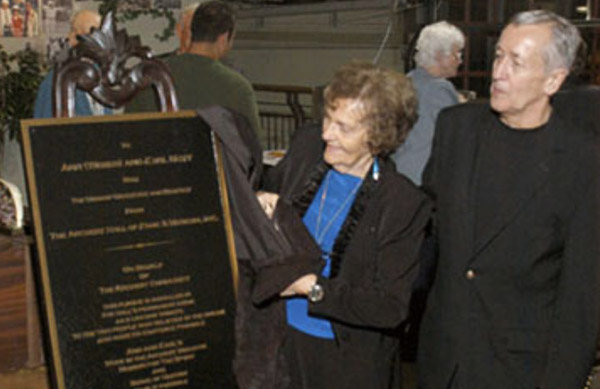 “The Two Ann’s” are well known and loved by those in the archery industry.  They are Ann Clark and Ann Hoyt and they were archery’s fiercest competitors and the very best of friends.

FA: How long have you two been friends?  Tell us about some of your greatest times spent together.

We have been friends for over 55 years. We met in archery. We were fierce competitors.

Our first encounter was at the 1955 National Target Championship at Oxford, Ohio.

Ann C was a newcomer at this prestigious event and was very nervous and afraid of all the famous competitors and most of all me! There were 3 Ann’s competing for the National Title, me, Ann Marston the young and beautiful, a comely lass from England and a teenager who later was to be a contestant in the Miss America Beauty Contest and won the Talent part of this event with her expertise in archery.

Then there was the unknown Ann Clark. Mother of three daughters and a housewife at age 28.

In a practice round, someone called out for ANN, the summons was for me, but Ann Clark responded and then apologized to me. My answer to her was “get used to it babe, there are lots of Ann’s.”

It took us four days of intense competition for Ann Clark to take the lead and win her first National Championship.

It was during this competition that new rules were established because of the Ann’s. The Dress code and the time to shoot arrows.

Both of us shot in strapless halters. I shot in my bare feet. Both are no no’s today.

We both took our time to shoot, playing the wind and circumstances. But it was Ann Clark that caused the controversy and the beginning of the timing system as we know it today.

Both of us were eager to win and under severe pressure, both of us tried to play the wind, each of us separately would draw the bow only to put it down to start the procedure over again. A stop watch was put on Ann Clark saying that she was taking too much time to shoot her arrows, nothing was said to me for doing the same thing. Ann Clark was accused of trying to upstage her competition. Hell, she had no idea what they were talking about.

Ann learned a valuable lesson in her first National Tournament, the only way to prove you are a good shooter is to shoot better scores. Continue at each tournament to do your very best until your scores become competitive with the reigning champions and be reckoned with as the person to beat.

I won’t say the Ann’s became bosom buddies after that first National but I will say that I was the first to congratulate Ann Clark. We both learned to respect each other. It was a bitter pill for me to swallow! I had lost the championship to an unknown. To this day we both remain fierce competitors.

Over the years we continued to meet at different events. Ann Clark as a National Archery coach, a National Judge, a speaker and representing major archery companies.

FA:  How are you both doing these days?

We are both doing wonderful. We live together  in a beautiful ranch house in the village of Glendale, in Cincinnati, Ohio. My two poodles, Red and Silver, also live with us.

We enjoy our friends in the boat club and the social dance club that we belong to. We enjoy dining out and having friends in. In addition, there are many family functions due to Ann’s large family that I have become a loving adopted member.

The past 20 some odd years of our lives we grew very close. We learned how much alike we are in many ways. Hunting brought us close and made us intimate friends. We traveled to shows after Earl passed away and are now life’s companions in our lovely home. Sharing Ann’s large family has given me a family of my own.

FA:   I know how much you love your dogs Silver and Red. Tell us about the pets you have had.

I have had a very unusual assortment of pets in my lifetime. I have had a tarantula for which I had to catch a daily supply of crickets, a sunfish that was only happy if I gave it its daily quota of worm, which I had to dig up, a skunk, a snake, a turtle and numerous dogs.

Silver and Red are the loves of my life these days. They are my constant and faithful companions. I care for them everyday and they give me lots of love. I even have to brush their teeth!! I don’t know what I would do without them.

FA:  I know one of your passions is the Archery Hall of Fame.

I feel that it is the ultimate honor to be inducted into the Archery Hall of Fame. I want to ensure that future generations will have a chance to learn of the great history of archery and the people who have made our sport what it is today.

I have seen much of the history in the making. From wood arrows to carbon, from wood bows to glass, from hand support for the arrow to modern launchers, from 150 feet per second to 300 feet per second and from recurves and straight bows to compounds. It has truly been a sport in transition. I anxiously await the next major innovation which will again change archery.

The Archery Hall of Fame would not have been possible without Dave Staples hard work and dedication. Dave and I go back many years. I remember when he used to come into Robin Hood Archery, where I worked at that time, with his Uncle. Dave was just a little kid then. Every time he came in to the store, he always had something broken for me to fix.

I think the Archery Hall of Fame makes our sport more accessible to help educate the general public. Our sport is growing more and more everyday. The AHOF showcases the leaders of archery. Not just talent but technology too. Anybody with even a spark of interest in archery will walk out of the AHOF and feel as though they are part of the sport too.

Archery affects the shooters in different ways. I can remember a lady from back in the day when I worked at Hoyt/Easton. Her name was Ms. Tyler Devlin, and she was on a limited disability income. She wrote to Hoyt/Easton who turned the letter over to me. It seemed that Ms. Devlin, who had become interested in archery, was having a problem budgeting a bow out of her limited disability income. She needed the bow to rehabilitate herself after a great personal sorrow. I read between the lines and secured a bow for her. She said in a letter she wrote to US Archer “I was stunned and surprised to receive a Hoyt bow. A real living person from a large corporation had responded to a struggling middle aged woman. After giving up hope of ever having a good bow, it seemed impossible that I could have a Golf Medalist bow. Incredible! Mrs. Hoyt and Hoyt/Easton’s gift to me gave me a way of getting through this period and being truly human again. – I want to openly thank Ann for what I call my rainbow bow and the color she has added to my life.” Now that’s what I call “shooting right through to my heart.”

FA:  Who are some archery friends that you have enjoyed spending time with?  Any archery heroes?

My first archery hero was Miss Edith C. Russell. She taught me the fundamentals of archery. She was also the first person to introduce me to the sport.

FA:   Any last words of advice for our Bowhunting.net readers?

Learn correctly. I had a good teacher and I learned the fundamentals correctly.

It takes a certain kind of person to become a champion. It takes a “Dedicated” person with a competitive drive and a will to win, who must “love” the sport and have the “guts” to keep plugging in spite of temporary slumps. A champion must be self -analytical as to her shooting technique and equipment needs. A true champion is one with a performance.

Archery is a way of life for me. I eat and sleep archery and all the time I’m working at it or with it. The essence of archery is not in winning a tournament but in the enjoyment of participating and of sharing in the spirit of sportsmanship and fellowship as manifested by the archers. The reward perhaps of personal efforts is a victory.

I would like to express my sincere thanks to Susan Whitacre and Ann Clark for their contribution and assistance in the research and compilation of this interview. Without their help this project would have never been completed. Thanks Ann & Susan!

Fletch Your Own Shafts With Opti-Vane II