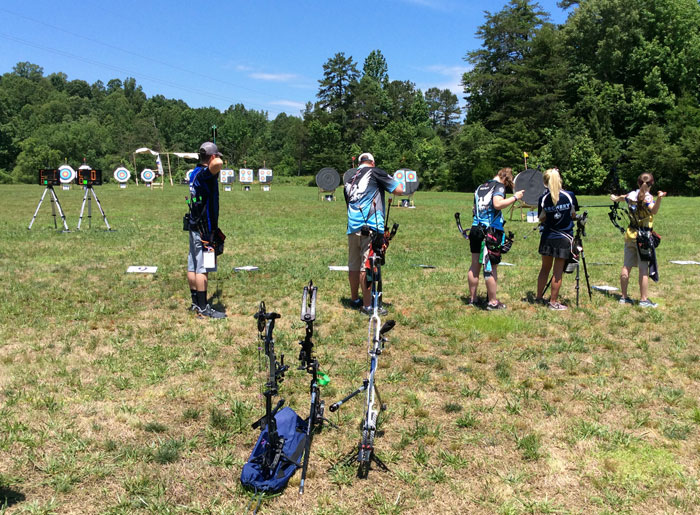 Shooters on the line.

June 2, 2018 would find Jim and me at the New Hope Presbyterian Church in Clemmons, North Carolina for a very special event.  No, it was not a Church service or a wedding but you can bet there was a lot of praying going on.    It was the grounds for the 2018 USA Archery Outdoor State Championship; USA Archery is the sanctioning body for the Olympics.  The Bandits JOAD was the host club for this event and we have had the pleasure over the past several month to become friends with several members of this club. A huge shout out to Stacey Honeycutt and her son Evan.  Stacey is the club administrator for the JOAD Hawgs and has been a great source of information.

Jim and I have shot competitive archery for 25 years in 3-D archery tournaments in local, state and national events.  We had hung up our tournaments hats about 16 years ago to do more archery programs for children and women and to be closer to home with our daughter during her middle, high school and college years.

This past year has thrown us some new challenges, recovering from Cushing Disease has been the hardest battles of my life.  Jim has been my archery coach from the beginning.  With his help and six or seven trips to the gym a week I went from not being able to shoot a bow at Christmas to being able to compete in this new adventure.

We shot the USA Archery Indoor State Championship in March at Boneyard Archery in Madison N.C.  At the end of the tournament Jim placed 2nd in Men’s Master division and I won the Women’s Master Division.  The indoor consist of two 300 rounds, which is 30 arrows at 20 yards and 20 minute break and then 30 more at the same yardage.

In 3-D you shoot one arrow per target from the stake designated for your class. In Outdoor you shoot 6 arrows, step behind the line and then the others in your group do the same.  You are shooting an 80cm target face on a target but with others targets faces for the other people in your group.  My group had three target faces on the same target butt and the other groups had either 3 or 4 target on their target butt according to how many were in their group.

So not only do you have to shoot a target 50 yards away, you have to make sure you are on your target and on your face.  If you shoot another face on your target, it’s a zero.  If you shoot another target in the lane beside you, it’s a zero.  Now factor in that you are standing in your lane with someone on either side of you in their lane.  I always hope that the person in the next lane is not left handed because then they face you.

You have 4 minutes to shoot 6 arrows, so not only is it very physical it’s mental as well.

You have archers from ‘yeoman” (the youngest) all the way up to the “master” class on the field, which means you have targets on the field from 20 to 70 yards, so they are set up in a “V” formation.  Compound archers on the right side of the line and Recurve shooters on the left.  Jim and I were shooting at the same time so we have no photos of each other shooting.  It is very close to what you see on the Olympics.

You also have two shooting times, you can choose to either shoot the morning round at 10 am or the afternoon round at 3pm.  We like to shoot early especially this time of year due to summer thunder storms and the heat.  The weather was in the 80’s with a east to west breeze most of the morning.

Jim and I received our new Mathews HALON and HALON 32 (Jim) 2 weeks before this tournament so of course we decided we would shoot them at this event.  Jim set them up, mine first and had me shooting.  We had also just received our new QAD MXT arrow rest with our names laser engraved on them.  Shooting at 50 yards would be very hard without the help of our Sure-Loc 30 power Eagle lens.  New Carbon Express 150 Maxima Blue Streak arrows, Jim built his arrows the Tuesday before the tournament.  Talk about going down to the wire.  Now add in the rain, it seemed like it poured the rain every day the entire month of May.  We could not get out and practice 50 yards and we have no archery shops close to us that has an indoor 50 yard range.  So we practiced form every day shooting at 20 yards, 30 and 40 yards when we could get a window of weather when it was not pouring rain.

We went up early on Friday, checked into the hotel that was 3 minutes away from the venue and then drove 45 minutes to Boneyard Archery to sight in at 50 yards on their indoor range.  Jonathan and Mindy Brown, owners of Boneyard Archery in Mathews, North Carolina are great people with a passion for archery and helping others.  They offer a 50 yard indoor range as well as an indoor 3-D range and they also offer techno shooting.   Jim and I sighted in our bows at 50 yards while a thunder storm raged outside.

Saturday dawned with a calm sunny sky and we were ready.  I can’t speak for the other competitors but the butterflies are fluttering when I step to the line . When that first buzzer sounds for you to step to the line, you have to take some deep breaths to get your heart rate in check and slow your breathing.  50 yards doesn’t sound like a long way and you would think that 80cm target face would look huge, it is and it doesn’t.

I was thankful to have Jim in the lane behind me. My confidence is still not back completely and having a new bow, you’re not quite use to, takes a bit of a mental toll.  After the first round and we stepped off the line,  Jim, as usual was calm and looked very confident.  He gave me a few words of encouragement.  “Take your time, don’t pay any attention to the buzzer, you have plenty of time.  Breath, aim, squeeze, practice form, you got this”.  He is always the calm in the storm.

At the end of the first round I had accomplished my goal, all on paper no shot worse than a 6.  The targets are scored by ring. X 10 9 8 7 6 5 and so on.   After about the third end I was feeling ok and was settled in.  Jim and I have never shot a outdoor field tournament and, with anything new it has its unknows but we are always up for a challenge.  For me it just feels great to be shooting and competing again.

When the last round was shot I was not sure I could have drawn the Halon for another shot.   I shoot 40 lbs.,  which does not sound like a lot but if you factor drawing it 84 times including practice rounds, it is tiring.  We got a bite to eat and knowing that our scores would not be at the top of the class we headed home just as the 3pm group was getting ready to start.  Stacey Honeycutt told us she would call if we had placed, just like she had done for the indoor state championship.

The 3 ½  hour ride home was filled with what we needed to work on, how we had shot, how we were proud of our accomplishment of finishing with all arrows on paper.

Jim, just like coming home from the indoor state told me I would win.  I just laughed.  The people that shoot these field events are not newbies and eat this stuff for breakfast.  It was my first time…our first time.  I told him I was sure he had placed, he just shook his head.  It’s not that we doubt our ability but this was a new type of tournament, shot under pressure with timed ends and I have only been back shooting for about 5 months and, we have not been shooting 50 yards.  So we set out on this adventure together not know where it would lead but sure it would be a fun new challenge.

Stacey called around 8pm and said that the afternoon had been hot with no wind, there was some controversy and a few conflicts which made it last much longer than the morning round.  We were glad we had shot the morning.    At the end of the day her son Evan had repeated his State Championship title from last year.  Jim had won BRONZE in Men’s Master and I had won GOLD in the Women’s Master class!   Wow, we would have never guessed we would have place let alone won medals.  Please don’t think we are being boastful in any way but we were proud of each other and ourselves.

I can’t thank our sponsors, our friends and family and Jim enough for helping me fight this battle.  Jim…..what can I say?  He is my coach, husband and rock, the calm in the storm.  So to everyone, don’t be afraid to step out of your comfort zone and try something new.  If you have a physical limitation or illness fight with all you have to keep it from taking what you love away from you.  If you want to do something bad enough you can conquer anything that life puts in front on of you.  Especially if you have a “Jim” to help you climb your way to the top.

Until next time, Keep Shooting for the Future!