Archery Accuracy Begins With Your Eye 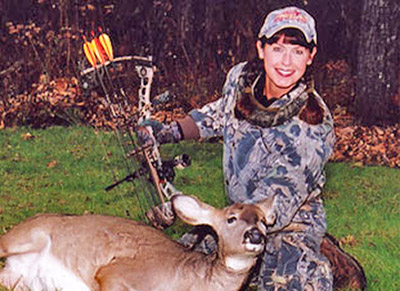 A couple of years ago I wrote an article entitled “The Wild Eye” concerning eye dominance and hunting, and the enormously grave consequences of not paying the “Wild Eye” its proper heed.  The Wild Eye is your dominant eye, and that is the side you should shoot on.  It is the side where your predator instinct takes over.

The primary reason you have a dominant eye is, when your heart rate goes over 120 beats per minute, which is nearly always the case when you are about to take a kill shot, your dominant eye takes over.  Like it or not, if you are shooting with your non-dominant eye, you will not be as accurate.  The dominant eye is involuntary.

You cannot control it.  You are in bondage to it and you need to accept that.   As a Firearm Safety Instructor and Bowhunter Ed instructor, I tell your these statements are not just my opinions. They are accepted and proven facts, scientific facts even.

So, let’s state this simply:

As I write this, a deer is back in my woods with an arrow in it, still alive, and I grieve that.  No, I don’t humanize animals.  Bambi was a lie as any informed person can tell you.  But, yes, I do grieve over an errant shot.  Hunting is a privilege that I revere.  Moreover, the taking of an animal’s life is a grave responsibility in terms of being proficient, obeying the law, being ethical, and using due diligence to retrieve game.

In my opinion, if you have not practiced with your gun or bow, you don’t belong in the woods.  If you don’t obey the law you are a poacher and in my book, a loser and not a hunter.  Same with being ethical.  And when you shoot something, you need to find it even if you have to look all day, or even for more than a day.  The other part of the grieving I reference, is my accountability before God.  After Noah’s flood, God gave the directive that animals could be hunted and harvested for human use.  The taking of a life is not a cavalier endeavor.  Do I lament over squashing a spider?  No.  Is that deer back in the woods making me fretful and anxious?  You bet.

I decided to wait another couple of hours to go track the deer again because that animal was still alive.  Why?  Well, yes, I shoot with my dominant eye and I am a very good shot.   I’m no hypocrite by not practicing what I preach.  I talk the talk and I walk the walk.

But I have developed a little “problem” over the last two months, and that is, my eyes are fighting for dominance for the first time in my life.  I have always been ambidextrous.  I write with my right hand, but can write with either hand if need be.  I golf, bat a baseball and shoot my bow left handed.  I play tennis right handed but favor a wicked backhand, indicative of a south paw.  I shoot guns both left and right.

Three months ago, my arrows started going in two places:  into the bulls eye at twenty yards most the time, and 30 inches and tad high of the bulls eye the rest of the time.  This vexed me at first.  I thought initially that it was an equipment malfunction, or that I was being inattentive.  But after several times out shooting, and retrieving wild arrows from my woods, I found that the wild arrows were in a very tight pattern 30 inches right of center.  I knew then that my right eye was involuntarily taking over about a third of the time.

I started having to close my right eye after years of being able to shoot with both eyes open.  I need to have both eyes open for range of vision and depth perception however.  So, once at full draw with my dominant left eye focusing through the peep site and the pin, I open the right eye.  However, this was no guarantee either.  I like to shoot at a range with people watching to simulate the pressure of an actual shot in the woods.  At the range, under pressure, that right eye was taking over more and more.  And there was this pattern of arrows off to the right.  I changed the size and location of my peep several times, to no avail.

So for now, I am cursed and shall remain at least for the time being, an ocular challenged bifurcated anomaly in this game of eye dominance.  I have as yet to find remedy for this condition, and I am becoming more and more hesitant to take anything but the most overly calculated considered, non-adrenalin filled archery shots for fear of wounding animals.  The switching eyes seems to be an issue at shots longer than 20 yards and less of an issue with shorter range shots.  I arrowed a 340 pound bear this year at 11 yards at full adrenalin, and had no eye dominance problem.  The deer in the woods that I hope to find dead in another hour, was a 27 yard shot.

I do not like the thought of passing up good shots, because I savor the charge of adrenalin I get, as rare as those moments are in relation to the enormous amount of time spent afield.  However, I am seriously considering switching to shooting right handed after all these years.  Change like this is unsettling.  I like things to stay as anticipated.

On the positive side, my right side is considerably stronger and I know I would be able to pull more weight and hence be more proficient at greater distances by shooting right handed.  But I am old dog who does not like to learn new tricks.  I like status quo, security and predictability.  Everything in my hunting life is geared toward being a south paw.  My tree stands, all 15 of them, are set up for lefties pretty much.  My bow sling, my release, my gear, are all left preferenced.  All instinctual.  And it appears I will have to either throw all the comfort out the window, or learn to shoot with one eye shut.

When I went back into the woods two hours later, the snow had melted but the deer’s blood trail was brilliantly red and unceasing.  I crept slowly through the woods to where I had seen the animal earlier, jumped it and watched it drop.  I saw the blood pool and found my arrow at the animal’s  first resting spot.  Then I saw the doe 20 yards further where I had watched her drop two hours before.  She had never gotten back up.  My patient retreat for two hours had paid off.  I fell to my knees in thanks.   My arrow had broken the back leg and hit the femoral artery.  I was very grateful and blessed to get this deer.