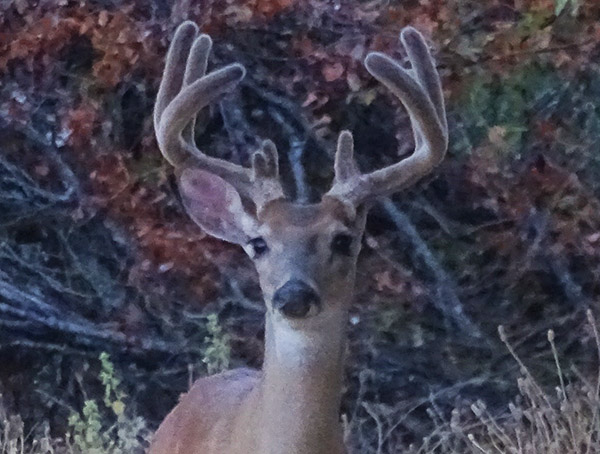 I had to make a trip to Grand Junction, CO to visit my sister, Sandy. It turned out to be a pretty busy thing, so I didn’t get much posted from there. But I am home now on my place in the middle of the local deer woods. Below are pictures I took the morning before my trip. They are pretty interesting,

Early in the morning, with not quite good daylight, but still enough to take a low light picture, I noticed some antlers poking up in the nearby tall weeds to my left.

The buck was moving slow and I could see his antlers turn in different directions I knew he was looking all around. in 5 minutes he was poking up out of the weeds in a more photo taking scenario. I took his picture. It was Ybuck. His velvet is getting compressed around his main beams and tines. So it won’t be long before he sheds his velvet.

Ybuck meandered around and soon came out of the high weeds.

Then Ybuck hooked a left and that change aimed him toward my ground blind, me, and my Sony.

He paused briefly and looked around carefully. I liked this picture the best.

So I zoomed in tighter on him and grabbed a close up. You can see his “Y” brow tine in the picture.

Ybuck is a good looking buck. If he can get 2 or 3 years more on him he will be a real dandy.

A low noise in the woods caught his attention and he turned and looked toward whatever it was. I couldn’t see it. He wiggled his tail as he watched the area ahead of him.

Then Ybuck walked into the woods and casually strolled out of sight.

Later that afternoon Ybuck walked out of the same general area where he had been this morning when he left.

Can I Get Permission To Hunt Your Land?