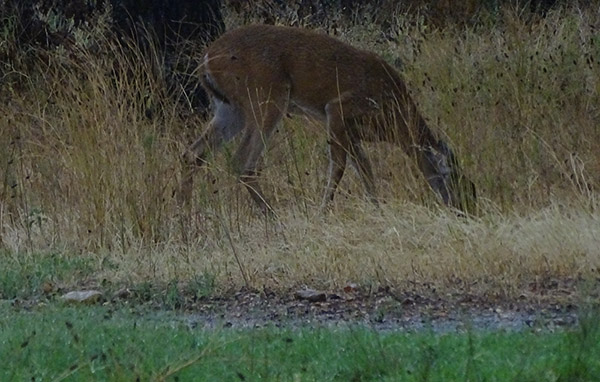 Finally, near the end of August there was a change in the hot, dry, blue sky weather. When I woke up half an hour before deer seeing and photographing time it was, surprisingly, raining like crazy. And deer being what they are, the few times the rain eased off, they immediately moved around. Since I’m near a major deer  bedding area I saw and took a few pictures, like the doe below that is walking on the edge of the tall dried weeds by my food plot.

The rain cranked back up and later on it slowed down. This young buck came out, apparently wanting me to take his picture.

It rained most of the night and was still at it the next morning. Around noon I saw this smallish, 6-point buck.

The next two days it drizzled on and off between high winds and rain.