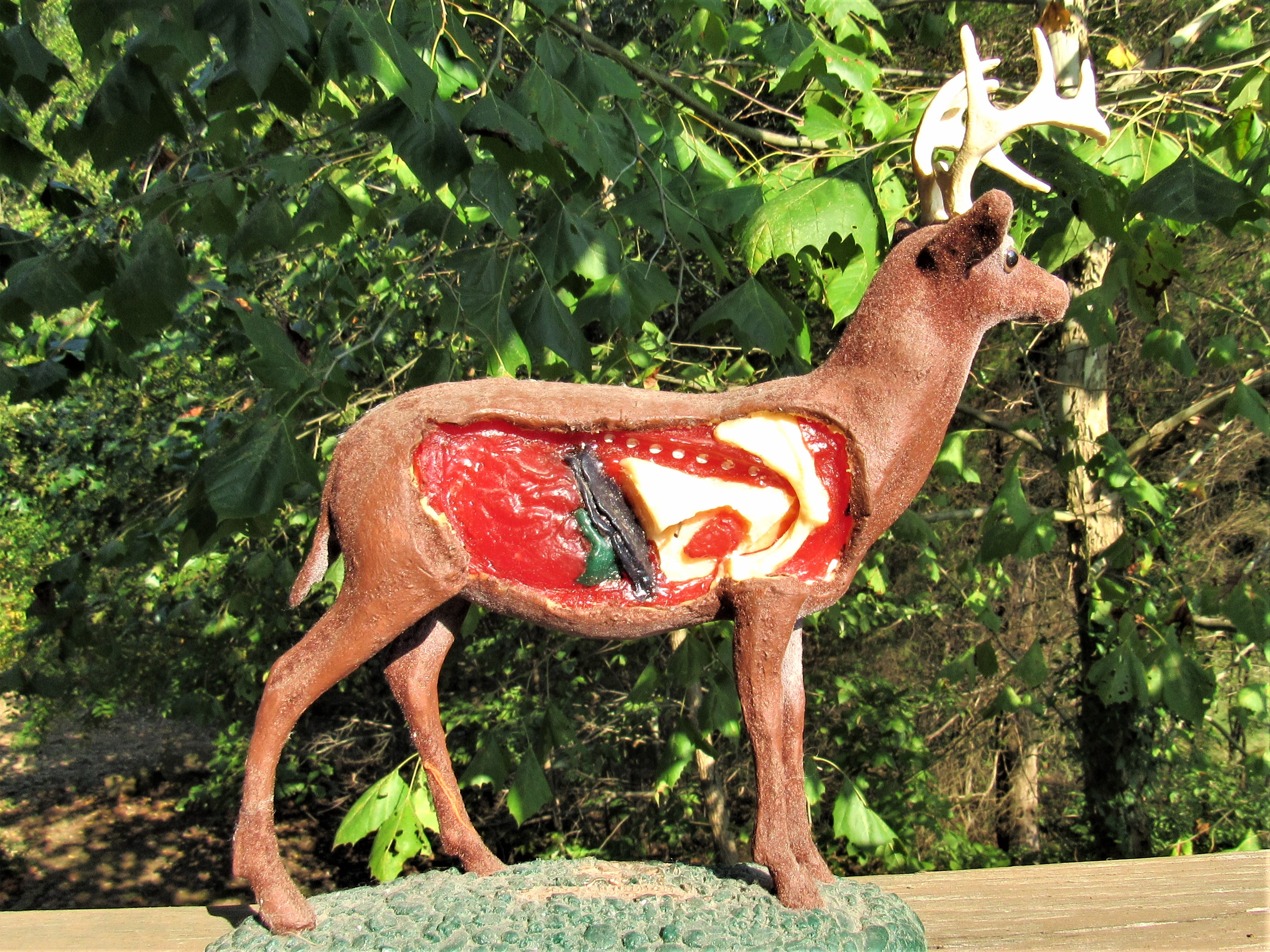 MY ARROW ZIPPED THROUGH the broadside buck’s ribs at just over 20 yards. He jump-kicked, whirled, and bounded away. Dead deer, I thought, knowing my shot placement had been perfect or damn close to it. That initial assessment was confirmed seconds later when the big eight-pointer stopped running maybe 50 yards away, standing in open creek-side timber and looking around as if wondering, What the heck was that? That’s when he took an unsteady step sideways and fell kicking in the dead November leaves.

I admit that shooting and recovering an arrow-hit deer is rarely that easy. He was heart-shot and instantly dead on his feet. Regardless, nearly 60 years of bowhunting bucks across 35 states has led me to understand that there are two guaranteed keys to shorter blood trails and consistent recovery. 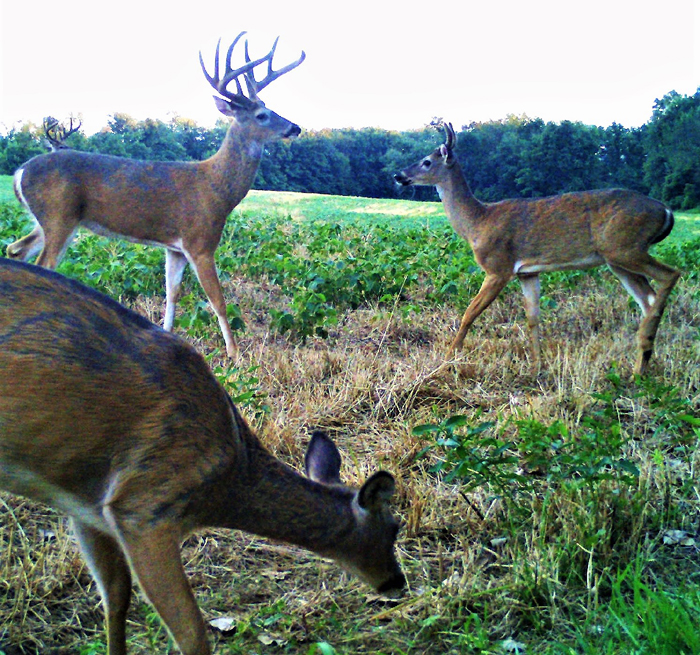 DREAM SHOT — All three whitetails are standing in perfect position for a deadly double-lung hit, which is one of bowhunting’s best for quick, clean kills. Note the front leg of each animal is forward, exposing the heart-lung area just behind the shoulder. It’s the shot experienced bowhunters dream of.

Frankly, I’m stunned by some of the comments I read on social media and hear where bowhunters gather to swap deer stories. Seems to me quite a few folks have never taken a hunter education class or maybe forgotten what they were taught. Others appear entirely clueless about exactly where to hit deer for fast, clean kills. And to compound this problem, some hunters admit they can’t adequately locate and read the signs left by wounded deer. 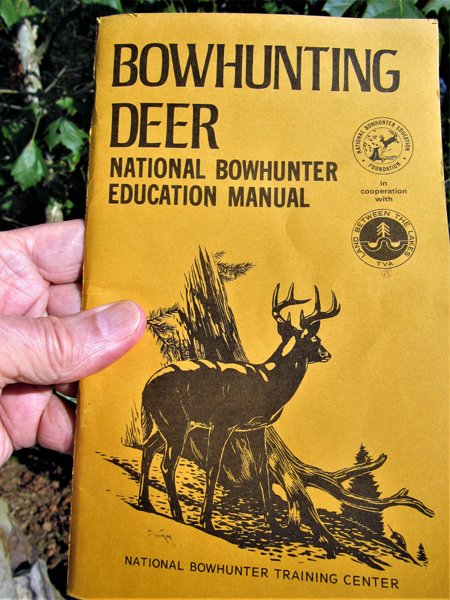 BOWHUNTER EDUCATION CLASSES have taught generations of hunters safe, smart, and successful bowhunting practices since debuting in the 1970s under the leadership of Bill Wadsworth.

With those troublesome issues in mind and fall hunting seasons already open or opening weekly, it seems timely and necessary to once again stress precisely where to hit deer and to explain what to expect afterward. Here’s a few time-tested, food-for-thought tidbits from the Book of James:

*Arrows tipped with razor-sharp broadheads will create massive hemorrhage when passing through a deer’s chest cavity and penetrating any one of the Big Three vital organs: heart, lungs, and liver. For many decades I’ve argued that broadside and slightly quartering away shots (that slice through both lungs or the heart) are most effective at killing deer. A liver-hit deer is a dead, recoverable deer, although it often takes more time for the animal to expire. Deer hit in only one lung can and do survive such an injury.

While it’s possible for bowhunters to kill deer with neck and head shots, just like their gun-hunting brethren, I believe it’s an iffy if not irresponsible shot for most archers since the neck is mostly a nonvital mass and the head is mostly bone and nonvital tissue. Ditto for front-quartering shots where heavy shoulder and chest bones, as well as muscles, mostly shield the vitals. And you can throw in intentional hip and butt-shots that rely on cutting the femoral artery, slicing the kidneys, or penetrating intestines and stomach before reaching critical organs.

*Don’t just take my word about my personal hunting experiences for what I’m now advocating. Way back in the late 1970s, when the nationwide Bowhunter Education Program was just gaining traction, NBEF manuals stressed such solid advice as: “Know the ‘insides’ of your deer where the lungs, heart, kidney, liver, stomach, intestines, and main arteries are located.”  (Check deer anatomy diagrams and 3-D models to locate and study the position of all internal organs.) 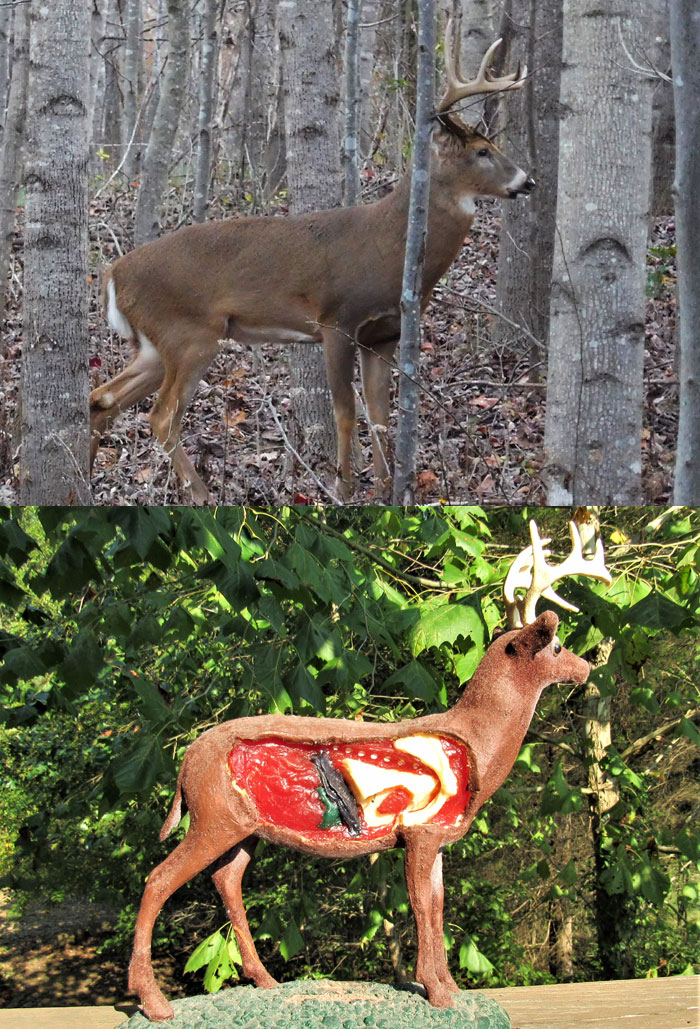 THIS 3-D MODEL is used in Bowhunter Education classes to help give hunters an understanding of proper shot placement to hit vital organs.[/caption]

*“The lungs are your best and easiest vital hit,” states the Bowhunter Ed manual. “A hit in the chest cavity will probably result in excessive bleeding, a good blood trail, and dead deer – your deer. Note that the lungs are above the elbow and behind the shoulder.

*“Leg hits bring good blood only if you hit a main artery, such as the femoral in the rear legs.” Experienced hunters often advise following the wounded deer immediately to prevent clotting, sap the animal’s energy with continued blood loss, and perhaps get close enough for a follow-shot.

*“If your arrow hits outside the chest cavity, or you’re unsure where you hit, wait 30 minutes to two hours before going after the deer. Exceptions are when darkness approaches or it’s raining or snowing.

*Off-target bad hits include the paunch, intestines, and stomach. All usually produce scanty blood trails. Never push deer hit in these areas. Wait anywhere from a few hours to most of the day to take up the trail. Bump a wounded deer from its bed and it’s likely there’ll be little if any blood to follow. 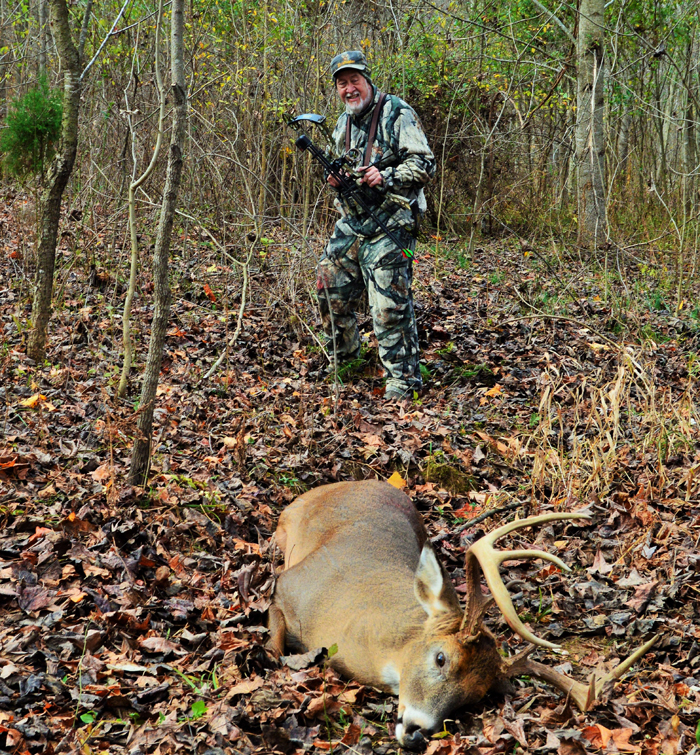 BEFORE AND AFTER — I shot this buck twice, once with a camera and again with my bow about an hour after taking the photo. The buck was standing in nearly the same position when I released an arrow from about 25 yards away. I watched him drop within sight after my sharp broadhead sliced through his heart.

REMEMBER, EACH SHOT AND HIT will be slightly different. Fractions of an inch can make the difference between a quick kill and easy recovery and a lost animal, with all of the emotional agony and angst responsible bowhunters feel when they don’t find the deer they’ve shot. That’s why it’s important to take shots that offer the best chance for hunting success.

In next month’s column I’ll offer more information and tips on successfully blood trailing and recovering arrow-hit deer. In the meantime, best wishes for a safe and positive 2018-19 deer season. For more please go to: Thoughts and Tips with M.R. James