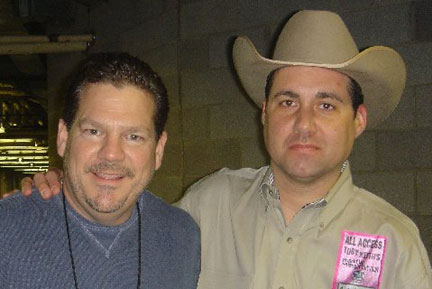 FA:  First of all Dave, can you tell our readers how you make a living?

I am the tour manager for country artist, Toby Keith.  I oversee all aspects of our tours. We are a team of 64 people out on the road in five buses, eight trucks and one jet. I coordinate everything including the hiring of all personnel. I am part of the negotiations with all of our vendors (lighting, sound, video, pyro, catering). I handle all of the logistics from city to city…hotels, media, fan club, our sponsor, Ford trucks.

FA:  How did you get a gig like that?

I was booking road bands nationally for a booking agency owned by my parents in Dallas Texas. Toby had a band that played several of the “watering holes” around the Dallas-Ft Worth area and I saw him in one of the clubs I frequented to look for potential talent for our agency.  We became friends and runnin’ buddies and we eventually started booking a few dates on him. He landed his record deal and then asked me to join him once he began touring nationally. Tired of the office…I jumped…..that was in March of 1993.

FA:  What does a typical day on the road consist of for you?

I wake up on a bus at the venue and I usually try to get into the production office about 7am. The calm before the storm!

I get with the local promoter and box office manager and check to see how the seating is sold. I make sure that there are not any sight line issues. (that the ticket buyer’s seat is not blocked by any of our production – Sometimes you have to relocate or upgrade) Then I start working on our guest list and media requests. Toby usually meets an average of 100 people a night prior to his show. That group consists of fan club, radio contest winners, our sponsor’s guests, and usually military.

Then I put together all tickets and passes for those folks get them to the box office. I grab a quick lunch and then find a local restaurant to order what we call “aftershow food”.  Although we carry our own caterers, they have to cut out to the next city to have a breakfast up for 100 at 7:30am the next day. The “aftershow food” feeds all of us after we load the show out at 1am.

Then I coordinate with the runners to get the drivers to the hotel for the day and begin working on the next show.  The whole time, I am constantly walking the building and making sure that the set up of production for the show is going well.
Around 4pm, we have a security meeting with the building and set all of the parameters for entrances to the building, the meaning of the different passes and their clearances and the location for Toby’s meet & greet/photo op.

By then, it’s time to grab a quick shower and dinner and prepare for the doors to open. (around 6pm or so.) I usually have to deal with box office issues up until the first support act goes on and also am coordinating interviews and also some personal time for Toby with local radio program and music directors.  About an hour before Toby’s performance, I gather all of the people for the meet & greet. We take everyone at one time to a designated room and then give them the rules. Off I go to grab Toby from his bus. Then we take LOTS of pictures. Everyone leaves with a picture with Toby Keith and an autographed photo.

Then…it’s showtime! Toby’s show usually goes about 1 hour and 45 minutes and I am constantly on the move checking sound throughout the building and making sure that everything is going smooth. I also try to pack up my production office during this time and get ready for him to come off of the stage.

Once the show is over, I get him to the bus and then go back inside to oversee the load out process of all of the production. We can usually wrap that up in 2-1/2 hours.  That takes us to about 1am and then I return to my beloved bunk in my bus and catch those much needed 5-6 hours of sleep. Before you know it…..it’s 7am and time to go back to work!

FA:  Does bowhunting help you relax?

Absolutely! I rarely have a quiet moment and this has to be the most serene. You can’t help but to relax.

FA:  How do you find time to bowhunt?

We only tour about 8 months out of the year so I try and go during those down times. It would be next to impossible to hunt during our touring season. The phone rings too much!

FA:  When did you first become interested in archery?

About 2002, a dear friend of mine, the great Tony Dukes, put a bow in my hand at his house once and dared me to shoot down a long hallway into a target!  Except for burying one in a door jamb, I did pretty well.  I left his house that day with a bow and a target in hand and stopped at a park on my way home. I was hooked!

FA:  Where do you enjoy bowhunting?

So far, due our touring schedule, I have only been able to take advantage of the sport in S. Texas. I have tentatively planned a bear hunt in Idaho for the spring 2007.

Toby is coaching his 10yr old son who plays football and I think we will be finish with the first part of the 2007 tour by the 1st of Oct. That means I will have more time to get in the woods.

FA:  Where were you born and raised?

I was born in Corpus Christi but raised in a small Texas town called Corsicana, about 50 minutes south of Dallas.

FA:  Do you do any other type of hunting or fishing?

I haven’t had the chance to try anything else but Whitetail deer hunting but I am going to try my hand at the turkey and hogs soon!  I love fishing…..any kind is great! Striper, bass, and I really enjoy deep sea fishing.

FA:  What is it about bowhunting that hooked you and made you take it up?

First, it was the challenge of grouping those arrows into the target.
Once I stuck that first deer, I was in!

FA:  Who are some people from the archery industry that have influenced or made an impression on you?

Obviously, Tony Dukes. He introduced me to the sport.  There are several key people in archery/hunting related companies who do a lot for the sport and also the military that I have to mention…. They are part of a group who unselfishly donate their products, their time and their money to bring wounded and decorated veterans back to the woods.

Ginny Dankmeyer with Predator, Brooks Johnson with Double Bull Blinds, Ed Friedman and Jon LaCorte with Nikon, Mike Sohm with Magnus Broadheads, Terry Smith with Eastman Outdoors, Curtis and Eric with Lumenok, the folks with BowTech, Nick Roden with EZ Eye Archery …..And I can’t forget my good friend, “The Aspirin Buster”, Mr. Frank Addington Jr.  He put on an amazing exhibition at one of our shows recently by hitting a “baby aspirin” out of the air with a behind the back shot!

FA:  Any “dream hunts” you have an eye on for the future?

I believe a Canadian bear hunt would be a great adventure for right now, but I would eventually love to go and hunt in Africa.

FA:  By the way, before we end this interview, I understand that you recently won an award for the second time.  A pretty prestigious award.  Tell us about it…

That would be the Parnelli Award. This is the only award show that honors individuals and companies in the touring industry. I won “Tour Manager of the Year” in 2005 and again this year. It was quite an honor to me because it covers all genres of music…not just country. To win 2 consecutive years in a row was amazing!

My strategy……I surround myself with really good people and we all work well together. They just make me look good! We also had 2 other individuals win awards on our tour as well. Those awards are recognition for ALL of us as a team.

FA:  I guess in your job you meet a lot of “famous people”, besides Toby & the bands you tour with, who stands out that impressed you?

Without a doubt….the men and women in our military who are putting their lives on the line to protect our freedoms.  They are all my heroes.

FA:  When do you guys hit the road again?  What’s a website so we can see tour dates?

Our Tours usually start in late January and concludes the 3rd week of February, which wrap up an 80+ tour dates that play coast to coast.  Those dates can be found on www.TobyKeith.com

FA:  How did your hunting go this Fall?

I have only had a chance to hunt one time so far. I will say it was within a week of getting home from a tour that kept me out on the road since July…so I was ready to hit the woods.  I can also tell you that there IS meat in the freezer…We are one whitetail less in the great state of Texas!

FA:  Any last words of wisdom for our readers?  (Can be a favorite quote or saying…)

I am known for saying…”Well…SURE you should!” My friend Tony Dukes asked me for some advice on something that he was contemplating. I thought he was actually kidding and I told him….SURE you should!  When it didn’t turn out exactly like he thought it should…he came back at me with it!  I told him “Man, I thought you were joking!”

We still laugh about it and it has become a catch phrase for us. Anytime something comes into question…no matter how absurd…we both say….”Well, SURE you should!”