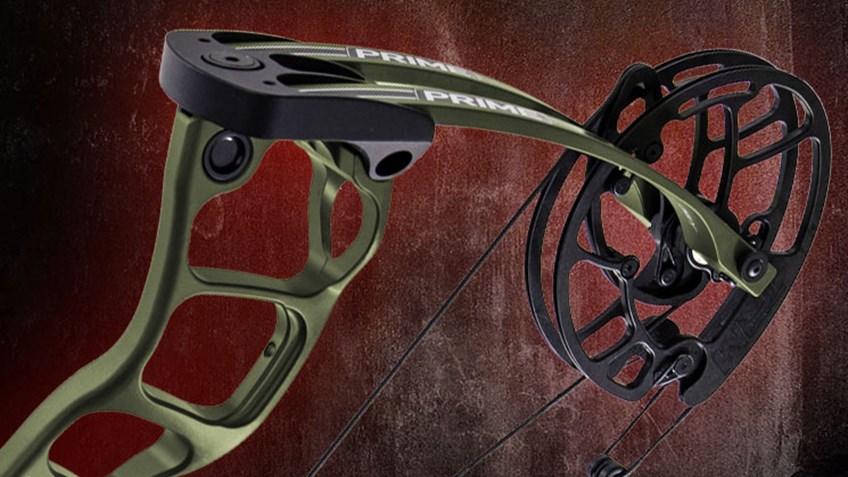 Fact is, the same few firms dominate the archery industry year after year, primarily due to the consistent quality of their bows.

Just shoot a top-end Hoyt, Mathews, PSE, Bowtech or any one of a number of great but perhaps younger companies like Prime or Obsession and you’ll see why. The bottom line is that any flagship bow from these bowyers will amaze you with their performance—performance that’s so close that your ultimate choice should come down to personal feel. What follows are my picks for 2018’s top compound bows. If I could rank them, I would, but that’s impossible without being subjective, so take it as a general guide, then go shoot them for yourself before buying.

Hoyt Carbon REDWRX RX-1
Perhaps the bow that’s made more waves that any other is Hoyt’s flagship carbon-fiber bow. The company does a great job of marketing it with ads and celebrity hunter endorsements, but it’s done an even better job with the bow itself. Most notable is the bow’s carbon-fiber riser. It’s manufactured by filling precisely-formed air bladders, then wrapping them in sheets of carbon fiber bonded by a high-strength resin. After the tubes are solidified to exact dimensions, the air bladders are popped, leaving rigid, hollow tubes. The tubes are then joined together to form the riser. The result is a bow that’s stronger, lighter and quieter than machined aluminum (with everything else being equal).

Pros:
• One of the quietest bows I’ve ever shot. Keep in mind that sound levels of individual bows can vary based on draw weight length, tuning and accessories, but my test RX-1 (27?-draw @ 60 lbs.), sounded more like a slight whipping sound rather than the louder thunk associated with most bows. And as a hunter, a quiet bow is second only in importance to an accurate one.

• Warmer to the touch on cold days and is physically quieter in the woods.

• Offered in draw weights of 55 and 65 lbs. in addition to the standard 40, 50, 60 and 70 lbs.; because bows sometimes perform best when their limbs are tightened all the way down, archers who prefer these common half-sizes are better served.

Cons:
• Hoyt used aluminum inserts to connect its carbon-fiber riser to the aluminum limb pockets. While there’s nothing wrong with this, it looks a little weird, and no doubt adds a few ounces of extra weight.

• It’s very expensive, if not the most expensive mass-produced compound bow ever made. But if you’re Hoyt fan, you’ll love the RX-1 one as I do.

PSE Carbon Air Stealth EC
It seems to me that Arizona-based Precision Shooting Equipment (PSE) doesn’t get all the credit it deserves for many of the outstanding, innovative bows it produces. Maybe that’s because the company isn’t devoting enough to marketing dollars—I’m not sure. But what I am sure about is the quality and performance of its bows. They just feel great to me, but then again I may be biased because I grew up shooting PSE.

PSE’s 2018 flagship, the only other fully carbon-fiber-riser bow on the market, is the Carbon Air Stealth. Unlike the Hoyt, its frame is made from one monolithic piece of shaped carbon fiber that’s hollow in the middle. It has no joints that could be weak links. In all, this bow represents the pinnacle in carbon-fiber bow technology at this time. Aside from its space-aged construction, the Stealth is actually very simplistic, and I like that.

Pros:
• At 3 lbs., 3 ozs., it’s silly light—like, light as in one of the lightest full-sized compound bows ever made. While ultra-lightweight isn’t desirable for a target bow and is probably unnecessary for stand hunting, I love it for backcountry hunts where long hikes and stalks are the norm. If you want more weight for certain scenarios, you can always add it.

• Although it’s available with other cams, PSE’s Evolve Cam (EC) is my favorite in the industry. It’s extremely smooth on the draw, so won’t pull your rotator cuff, but it’s incredibly fast. It has a solid back wall, but not so solid that it shudders as it rolls over. While some people don’t like 90 percent let-off because it’s easier to induce hand torque, I love it, but it does take some time to get used to—it feels a bit freaky at first, like the bow isn’t going to go off. If you’re not into freaky stuff, you can easily replace the cam module for one with lower let-off.

• Its grip is wider than usual, and I don’t like it as much as the minimalist PSE Pro Series grips that I favor.

Mathews Triax
Recent Mathews flagships have been slightly too big—as in too boxy—for my complete adoration, but the Triax remedies that. While it’s compact at 28-inches axle-to-axle—plus another few inches when considering it’s huge cams—it weighs 4.4 pounds, which means it’s the most obese bow on this list. No matter, some shooters like ‘em heavier for the stability extra weight lends. Thanks to its roller guard, it maintains Mathews’ reputation as the smoothest-drawing bows out there, and as always, it’s as quiet as a cobra on carpet. Surprisingly, this little dynamo is blazes fast, especially for the company who doesn’t usually play the speed game. Previously, I’ve called Mathews bows top-heavy, and although some people love that feel, I don’t, but to my hand, the Triax feels much more balanced. Indeed, it’s my favorite Mathews in a long time.

Pros:
• Although my RX-1 test bow was possibly quieter than the Triax I tested, from what I’m hearing around bow shops, the Triax is likely the quietest bow on this list, on average.

• One of Mathews’ most compact bows in awhile, and this is good, because it’s been building some box-kite sized bows over the last several years.

• It’s not as top-heavy as most Mathews.

• At around $1,000, it’s reasonably-priced compared to the carbon bows listed above, and is a great value for all its merits.

Cons:
• The Triax is billed as measuring 28-inches axle-to-axle, but the measurement that counts is its overall length. With its giant Crosscenteric cams, it’s actually only 2 inches shorter than the Hoyt, for example, not 4 inches as the specs would suggest. Still, it’s pretty short.

• While the company has invested a great deal into 3D Damping technology to make its bows quieter with less vibration—it claims the Triax has 78 percent less vibration than the competition—there’s no doubting the fact that it’s heavy 4.4 pound weight plays a part as well. But it certainly has almost zero vibration.

Bowtech Realm
I love Bowtech bows. Historically they lean on the faster side, but like the others, they’re incredibly quiet and easy to shoot well, too. The Realm appeals to me because it’s a short (30.75 inches axle-to-axle), compact hunting bow with the longest brace height here of 7 ? inches, which means that Bowtech was not going entirely for speed here, but rather for shootability. (If you want more speed, there’s the Realm X). Yet still, it’s fast as all-get-out at 340 fps. It uses Bowtech’s proven Overdrive Binary Cam system that is aggressive by most standards, but remains fairly smooth. It’s also supremely adjustable without a bow press and even comes with Bowtech’s new FlipDisk system that easily converts the bow to comfort or speed mode. The Realm incorporates a cage-design riser that is proving to be more rigid than regular risers that may flex laterally under stress. It also has several new anti-vibration devices, such as a Mathews-inspired Orbit Dampener that soak ups vibration without the use of a stabilizer. Finally, something relatively new to Bowtech, it’s got the best new grip (which to me means almost no grip) in the business.

Pros:
• A longer brace height makes it forgiving without giving up too much speed, thanks to its design.

• Clutch Performance Grip is customizable, but in its most simplistic form, it ensures direct riser contact with only a thin piece of rubber in between for comfort while hunting in freezing weather.

• The Binary Overdrive Cam is easily adjustable and comes with a FlipDisk system to quickly choose between speed or comfort settings (about 5 fps).

Cons:
• The extra metal required for its cage riser places the bow in the middle of the pack for weight at 4.3 pounds. (While a few ounces is not a big deal and may in fact help long-range accuracy, I’m splitting straws here.)

• Huge cams make the bow several inches longer than its 30-inch axle-to-axle length would suggest. Still, it’s one of the more overall compact bows of the bunch.

Prime Logic
The top-notch Michigan-based machining company, G5 Outdoors, has been producing some extremely innovative, precision-made bows under its Prime brand for some time now. But over the last few years—especially with the advent of its Parallel Cam technology, Prime is gaining a reputation among professional bow tuners, shooters and industry insiders as one of the best-made, most tunable bows in the business. The only problem I had with most of their models before was that they were too wide, or boxy, for my preference in the woods (I am not a big guy, and I like compact bows). However, the introduction of the Logic has changed all that.

Its stubby split limbs are short yet powerful, and combined with its 31-inch length, it’s very compact indeed. Certainly, with its 7-inch brace height and Parallel Cams, it’s intended as a hunting bow, and I like that. The cams nearly eliminate cam lean that can impair precision accuracy at long range. I also love Prime’s grip, that’s basically two rubber logo panels that are for just show. The real grip is the bow’s riser itself. If you’re one of a growing cult of Prime shooters and you’ve been waiting for a pure hunting bow, the Logic is it. It’s inherently accurate, stable and compact. The only complaint I had was that at first, its back wall was too firm—as in it would lurch when the draw stops hit the limbs. So I looked in the box and found the included string stops. In five minutes my problem was remedied. Yes, I know I’m weird.

Pros:
• It’s relatively simple eccentric system combined with Parallel Limbs are touted to reduce cam lean and time in tuning. From what I’ve seen, I believe it.

• More compact than other Prime models, yet extremely solid.

Cons:
• Not the fastest (but still plenty fast).

• It could be quieter.

• Its cams are not easily adjustable across a wide draw length range.

How To Hunt Buck Bedding Areas