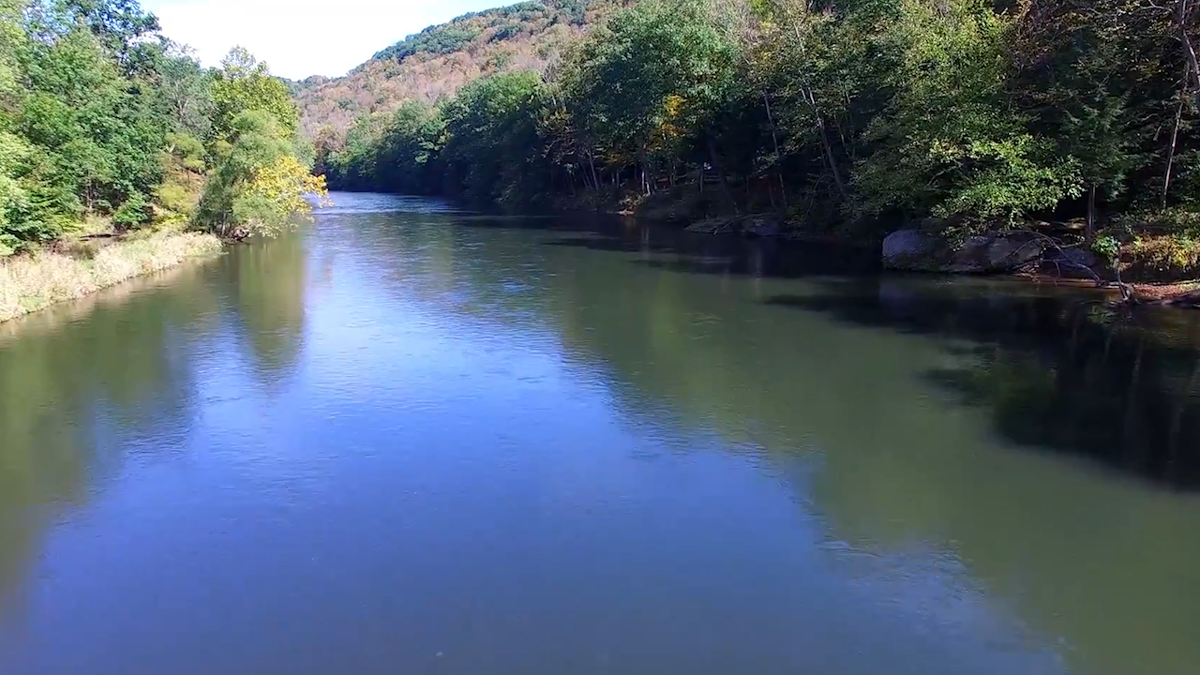 I was 10 years old when I went on my first expedition. Granted it wasn’t above the Arctic Circle, but when I learned that adventure was on the menu I shook with excitement and said, “Yes, I want to go canoeing.”

My father Wade,  who sadly passed away Sept 22, 2018, was a seasoned Explorer. He had been on many expeditions with some quite perilous. Many of them included a two-seater, German-made kayak with a collapsible wooden frame and a hybrid gray hypalon and blue canvas shell. The shell wrapped around it making it near impervious by spraying it down with Atsko  Silicone Water-Guard on the canvas above, the hypalon protecting us from everything below. I would later become more acquainted with that very kayak, but on this venture, our voyage would be in  our brand new,  red Oldtown canoe.

Dad sat me down in office and described to me, all that it took to successfully complete said expedition. He drew my attention to an old Atlas he had been keeping under his arm during our conversation and sat down with me on the floor Indian style before opening the large book to a page that I recognized.

“Here we are in Western Pennsylvania,” he said, drawing his finger along the map. “And here is a place called Warren,” he pointed at a spot scores of miles above Pittsburgh. “Reed, I’ve always wanted to see this land from the perspective of the Allegheny river.  So many natives and settlers first saw this area from the rivers.” He took a breath and let it out slowly.

I could see his thoughts on his face. My dad loves the layers of history that Pennsylvania has and in that moment… I could see the spark of the Explorer in his eyes.

“It’s 57 miles”,  his hand caressed the map to an area just below Emlenton PA. “To this spot, where mom can drop off the car.” He looked at me in his confident way and grinned.

“And we’ll need to pack food for a couple days, so what would you like to eat?” He said glancing back at the map.

“A couple days?” I said, realizing I wouldn’t be able to spend the nights in my cozy little bed.

“We’ll be camping of course.” He said studiously, “you can use my old sleeping bag… Do you like s’mores?”

“Yes!” I said without hesitation, (thinking back on this moment I realize that my dad knew how to speak my language.)

“What other things should we eat?” He said putting the Atlas on the carpet nearby.

I got lost in a shopping list of ideas.

He walked through my list and added a few of his own ideas about other things we’d need, like a hatchet and a small propane stove, coolers and tarps, lanterns and fishing poles. I was also allowed to bring my brand-new 22. I had gotten the junior sized rifle for my birthday and though we had tried to sight it in, the groundhogs around our house were still very safe.

Dad walked into the garage and outfitted me with my mom’s small life jacket, which I was almost too big for me to sit in. It was dark royal blue and when I sat, the vests shoulders lifted up to just under my ears! Luckily I didn’t even understand what the word style meant at the time. 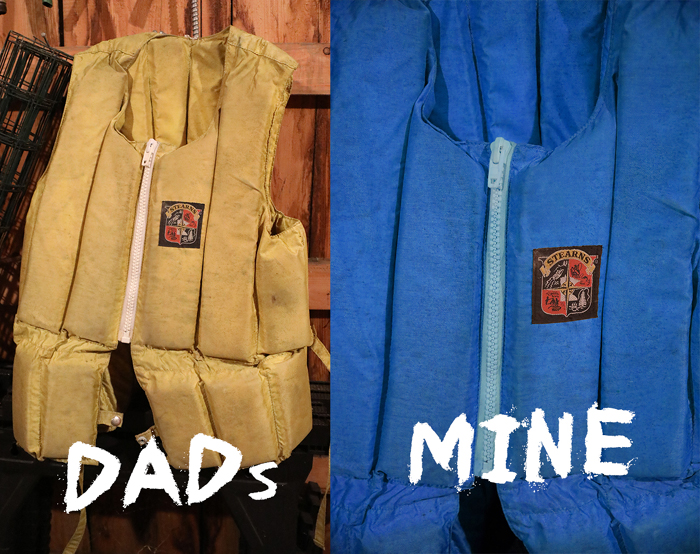 Dad had me put on my trustee rubber boots, which came up to mid calf level on him. On me they were touching the bottom of my knees. He mentioned I’d need those to get in and out of the canoe.

Then he looked at me and cocked his head to the side, “There’s just one thing missing.” He turned around and went over to his work area and came back with a canoe paddle. He smiled and handed it to me. “I think it’s just your size.” Dad saw the look of wonder on my face as I held the paddle, just a hair over 5 feet tall, it was perfect for me.

“Wow,” I said taking it in, “I didn’t know they made paddles my size.”

“I thought you’d like it son”, he walked behind me and gave me a hug.

Then dad got my help pulling the red canoe into the garage. He told me that we needed to pack it before we ever left. He must have read my face because he explained, “We must make certain everything would fit… with room for us”. I was inspired by the novelty of this thought.

Afterward, we went upstairs for dinner.

I was brimming with excitement, “Mom, mom… Dad invited me on an expedition!”

“Yes honey, on the Allegheny.” She said while putting dinner on the table and taking a seat.

“How’d you know that already?” I must have had a perplexed look on my face because she giggled and poked dad in the ribs playfully. “Lucky guess” she stated. “You’ve got two weeks and you’re going to have to miss a day of school.”

Miss a day of school, that was music to my ears.

Two weeks passed in a blur of anticipation before I found myself in dad’s gray pickup truck driving past Foxburg and Emlenton then North on unpaved roads that tracked the river.

Eventually we arrived. It was a gentle slope that crept down to the Allegheny River covered in tall mugwort and goldenrod. A couple of islands stuck out of the river like a defiant oasis. We waved goodbye to mom and lugged the canoe toward the water. Just as the tall weeds ended on the gradual bank we stopped and began loading the canoe. Then dad directed me to get in and fed the canoe into a pool swirling with eddy’s. I was in the front, the cooler, 22. and other supplies in the middle and dad was about to get into the back. The water was much slower here than what I could see of the shallow, quick water between the spattering of isles.

“Point the nose of the canoe toward faster water,” dad said, “and hold on son, it’s about to begin.” I pushed my little paddle blade into the rocks and mud, aiming the front of the canoe toward the middle of the Allegheny. With a heave dad pushed off and stepped into the canoe, one strong pull from his paddle and we shot out into the rippling water that turned us downriver.

I could see the rocks going by quickly under the water. Some of the river bottom was grassy, it’s blades pulled by the current. Dad said that the Allegheny had flooded from the summer rains and the water level was just now receding.

“How about I teach you how to use that new paddle,” dad said, sinking his own blade down on the right side to steer us. “The first thing you need to know is ‘if paddling in a canoe with only one person you must paddle on both sides regularly, this keeps the boat straight, but two people can paddle regularly on opposite sides and get the same effect.’ Are you ready to try?”

“Yep,” I said grabbing my paddle and sinking it into the tea colored water. I began paddling as hard as I could, but was a little dismayed when the boat turned the wrong way about.

I did, his paddle was on the same side as mine.

“I knew you’d figure it out, now watch this.” My dad stuck his paddle deep into the water and pushed its blade straight out 90° from the canoe. The nose of the canoe tilted into the current and the water gently pulled us back around, the pressure on either side acting like a natural level.

“Wow, you didn’t even need my help.” I was astounded at his skill.

He tried to hide a smile, “Yeah, well I’ve had some practice.”

“57 miles is a long way dad, “I pointed out. The rising banks of the river quickly became the most northern reaches of Appalachia.

“It’s just long enough,” he said, “for your first expedition.”

I’ve since caught the same spark that my father had in his eyes that day over 20 years ago. And I’m happy to say that our red canoe has a lot of scratches and dings in it now. My life is filled with stories about me, and my father. One of my dad’s core missions was taking a child on an adventure, your kid… or the neighbors kid. Youngsters that need investment are plentiful, he’d say. I pray that you, dear reader, would invest in ways that make memories just as sweet. We all influence with every movement, every choice. Now, the next time you have an opportunity, I wonder what you will do…