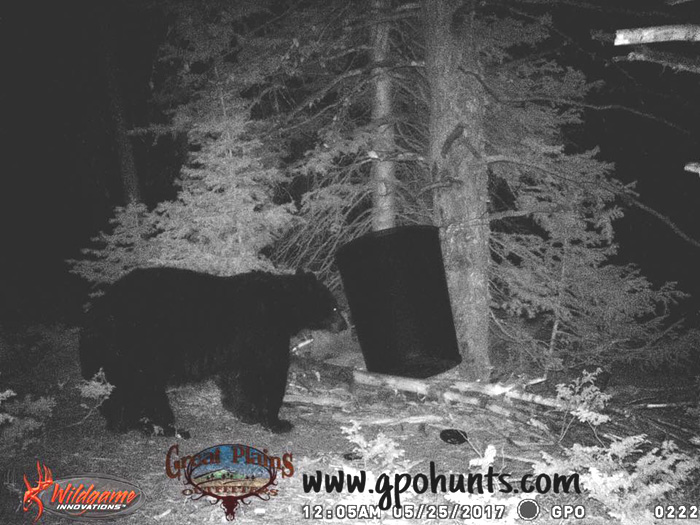 This bear got a whiff and came to the bait.

Well a year, a new baby and another hunting season later, I am finally able to sit down and write about baiting bears. You’d think 9 months of being pregnant I’d have had time to sit down and write a lot, that was truly my intentions but it turned out that I was more busy and tired then I thought I’d be.  I think any writer would tell you that in order to write well, you need to be in the proper mood for it and it seemed that any time I had the time to write, I most definitely was not in the mood. But here I am, sitting in antelope hunting camp with my now 3 kids on a super windy Wyoming day ready to write about how we bait bears.

I am not writing this to tell you that you have to do this exactly like I do to be successful. I’m just writing this to hopefully give you some new ideas  or maybe alternate a little as to how you do it. I was self-taught on how to set up baits. One day I suddenly felt an urge of independence and decided I was going to go to the Wyoming Game and Fish office and register two bear bait sites and see what I could do. Was I instantly successful? Definitely not, but now that I have had my sites for coming on 10 years and they are extremely active, I feel  I know how to be successful.

My first year of baiting I contacted a meat cutting place in town and asked if I could have their scraps for my bear baits. They agreed and I filled the back of my truck with garbage bags of just about every legal cut meat they had. I had borrowed barrels from a friend to see if I was even going to like baiting and off to the mountains I went. Long story short, the bears did not find my baits until the season was almost closed and they most certainly did not finish off all the meat in my barrels. In Wyoming you have to remove all bait and barrel within 7 days after the season closes. I went in on the 7th day hoping the bears would clean the barrel. By the time I was within 100 yards of my bait, I could tell they had not cleaned it out. The smell was something to be proud of for sure. Rotten meat including fish in the summer heat is pretty unmistakable.

Upon getting to the barrel I assessed how bad it was. A 55 gallon barrel about half full of rotten meat and maggots. I had no choice, I had to carry it out. I strapped the barrel full of rotten meat and maggots onto my back and started the mile trek back to my truck, praying for a good breeze along the way. About half way back, my legs were tired from the weight and my knees definitely do better going uphill than they do going downhill. My knees felt as if they were on fire and suddenly my foot caught on a big sagebrush and over I went. I lay there on the ground, face in the dirt and barrel still strapped to my back wondering if I should laugh or cry. That’s when I felt something wiggling in the hair. I instinctively reached up and yep, you guessed it, maggots. When I tripped they had gone flying out of the barrel like a flock of birds and took roost in my hair. That’s when I decided that laughing was really all that I could do. Moral of this story, watch out for the sagebrush.

From this, I learned that meat was some of the best bait I could get. It smelled like death fast, always got a ton of maggots which bears also love and is rather easy to come by where I’m from. This became my go-to bait. Later I learned that it was even better to not only get my meat from the meat cutter but to also save bait throughout the year from meals or leftover birthday cakes to even better the smell. It also made me feel better that our leftovers weren’t just being thrown away but going to feed the bears and gave me an excuse to not eat a whole birthday cake or Thanksgiving pie.

What about where to set a bait originally? The spots I chose were just dumb luck essentially when I registered them. I had absolutely no idea what I was doing when I went into the Game and Fish office that day. The lady at the desk was trying her best to help me when I stood there staring at the map of available areas  I could register. She told me that most people look for a spot that is easily accessible from a road. I chose both of my spots based on this and I knew there were some creeks nearby. If I didn’t like them I knew I could find a different spot the next year. My spots were also dumb luck  because both were smack dab in the middle of two really good drainages. One had 3 different drainages coming into one big one right below it and the other had two big drainages coming into one big one right below it. They were both in the middle of a bear crossing area. I’d love to say I planned it that way but I hadn’t.  But I will say that when I went up there for the first time I did a little happy dance once I followed my GPS to where my bait was supposed to be set. 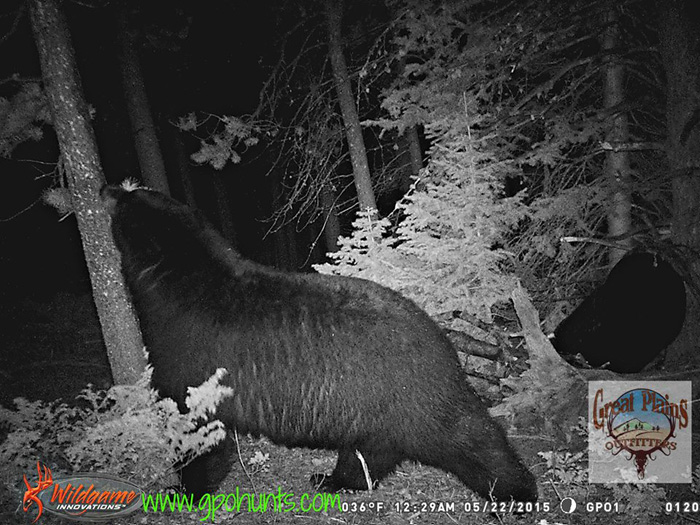 Both spots are about a mile from a main road, definitely something to consider when setting baits. Remember you will be packing in a barrel and bait as well and if you get several bears hitting your baits, you will need to replenish them often. One year I had a mom with two cubs, a single sow and 3 boars coming in to one bait. Every few days they would have it cleaned out. Thankfully my husband  helped me keep them replenished. He would pack in about 80 pounds and me about 60 pounds every few days. That’s a lot of meat scraps and is not particularly fun on the steep uphill climb. (I’d still rather hike uphill than down, less maggots that way).

A few other tips, once again of stuff that I’ve just found works for my baits and some I discovered on my own from trial and error, others my husband taught me. When setting and filling your bait, wear gloves. It’s always a lot more pleasant when you are throwing bait into the barrel to be able to just take off gloves rather than trying to wipe it off in the dirt or on your pants. Also, wear gloves when setting a trail camera! But not the same gloves you used for putting the bait in the barrel. That’s a good way to get your expensive trail camera eaten by a bear. I have several cameras with teeth marks and SD cards filled with pictures of the inside of a bear’s mouth.

A good, , sweet,  liquid attractant works wonders. It helps put off a sweet smell that bears love. Just think of when you are smelling that sweet fresh pan of brownies in the oven. You could find the kitchen blindfolded just following your nose. My favorites are raspberry, blueberry and anise that you can get in concentrated form in liquid or powder.

A tip my husband taught me that I never would have thought of, is putting sticks over the barrel when done. Not only can you glass it from a distance to see if it has been hit but it makes the bears spend a little extra time at the bait taking the sticks off to get into the bait. This is precious time if you are hunting but also gives more trail cam pictures. Some of my favorite images have been a mother and cubs and the cubs are standing on top of the pile of sticks. I posted one of these pictures on Facebook someone told me that putting sticks over a barrel will cause the bears to not be able to smell the bait and therefore will ruin the bait site. Don’t be that guy, that’s not true in the least. Bears have a very keen sense of smell and when there is over 100 pounds of rotting cow fat and meat under them with a little blueberry glaze, bears will smell it no matter how many sticks you put over it.

Whatever your situation is I hope I was able to help improve your baiting technique. If you have any tips that have worked well for you, I’d love to hear them! I’m always looking to find ways to improve.

Before trying any of my tips, be sure and check your local regulations. Some states do not allow baiting, some do not allow artificial attractants and some have regulations on what you are able to use as bait. For more please go to: Jennifer Jenkins