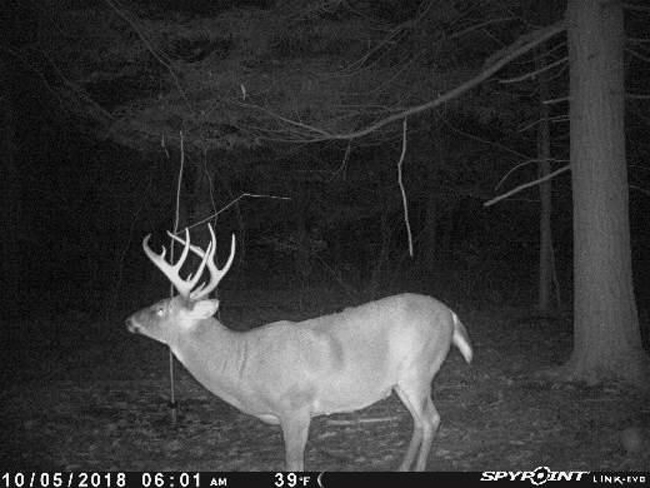 Pennsylvania instituted an antler restriction law in 2002. Personally, I have seen an improvement in the quality of deer in my home state. Every year I run trail cameras to scout my hunting areas and I see some amazing deer. The past few years I have had some 140 inch and larger class deer running the areas I hunt. I have yet to close the deal on a Giant PA buck but I know they are there!

Early in August I purchased a SpyPoint Evo cellular trail camera. I was a little hesitant at first because I do not have very good cell service where I live or hunt. Regardless, I purchased the camera and took it to the 40 acre farm I like to hunt. I decided to place the camera near a main trail that was close to my treestand. I turned on the SpyPoint Evo camera and everything seemed to be working well. I checked the app. on my phone and it registered that the camera was working and taking pictures.  I had a little more work to do so I went about my business on the farm.

I knew the camera was on so I started making my mock scrape. I took out my collection of Smokey’s Deer Lures and made sure the mock scrape was directly on the trail and in front of the camera. Finishing with that I decided to make another on the next trail over. I located my old mock scrapes from last year and began refreshing them. I knew bucks would hit them soon so I hung another trail camera up near this set of scrapes. All I had to do now was wait.

Later that evening I got a notification on my phone from the SpyPoint camera. I opened the app and logged into my account. My jaw hit the floor when I saw the pictures. A great 9 point buck, in velvet, was walking to my scrapes. This 9 point had long main beams, solid G2’s and G3’s and great mass. My heart was racing as I viewed each picture. The buck earned the name “Heartbreaker” because my heart will be broken if I can’t harvest him. 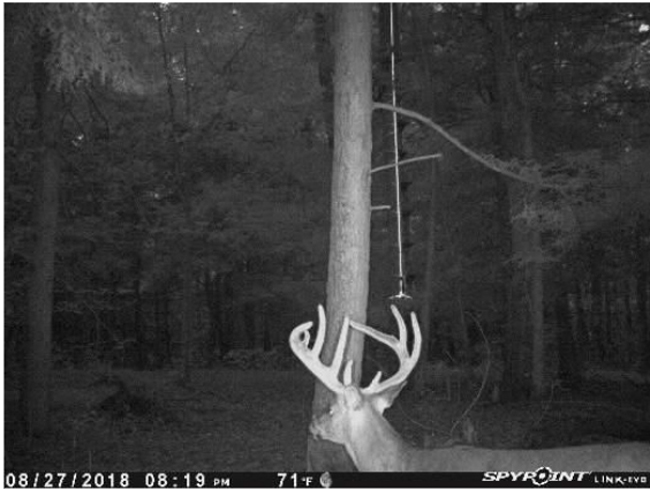 As August moved into September more and more bucks were hitting the scrapes but my target buck was going to be, “Heartbreaker”. He would frequently hit the mock scrapes and pose for pictures in front of both trail cameras. Early in the morning and right at dusk he would hit those scrapes and claim his area. Having the SpyPoint Evo cellular camera made it so that I never had to go into his core area. My Stealth Steps and Advanced Takedown Treestand had been set in June. This kept my area scent free of any human odor. These cameras are a game changer. 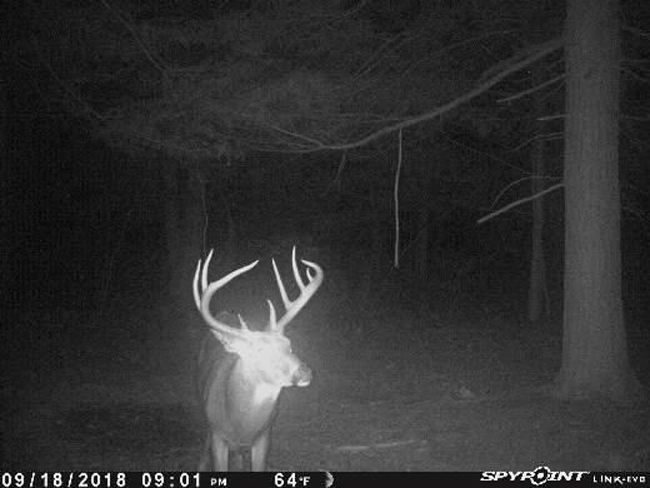 September moved on and I kept getting pictures of all of the bucks. The Camera even captured a nice black bear and a few coyotes. Still the bucks came to the scrapes and left their mark! One day I was surprised to find an albino buck hitting the scrapes. He doesn’t meet the 4 point side rule for my management unit so he will be off limits. All I was waiting for was September 29th when the archery season would open in PA.

The week leading up to the opening Saturday, of archery season, was nerve racking! I was getting plenty of pictures of Heartbreaker but they were all between 1 am and 4 am. The weather forecast called for a cold front to move through on Friday and stay until Sunday. Wind direction look good and temperatures in the 50’s were promising. I was excited for the season to begin.

My camo had been washed in Nature’s Essence Natural Wash, my Athens Altitude was shooting well, the Black Eagle Spartans were each tipped with a different Grim Reaper Broadhead, and my Buck Cages were full of scent. I set my alarm for 5 am and was ready to get to the stand well before light. I made sure my truck was packed so I could leave the house quietly after waking.

Like a kid at Christmas, I had a hard time sleeping! My alarm sounded and I quickly showered, dressed in shorts and a t-shirt, grabbed breakfast and left for the day. The temperatures were in the high 40’s and the sky was clear. On my way to the farm I saw two nice shooter bucks. Seeing these two bucks gave me a positive feeling for the day. I pulled into the farm and got all of my gear on. I never get dressed until I get to the area I am going to hunt. After dressing, I quietly made my way to my stand. I knew the sun wasn’t going to rise for another hour but I wanted to make sure I was in the stand well in advance. I was hunting Heartbreaker’s bedroom and I was hoping to beat him back to bed.

One of my favorite parts of hunting is just sitting in peace and watching the world wake up. Sitting in the dark and having time to reflect and talk to God is a powerful feeling. As the sun began to rise in the east I was visited by a Great horned Owl. He landed two trees over and made his presence known with 3 loud hoots. I am amazed at how quiet they can fly through the woods and swoop in on prey. This owl looked me over and soon left for another part of the farm. As more light touched the trees song birds began to sing and squirrels came out of their nests. I watched intently all around, looking for Heartbreaker, and by 10 am it was time for me to head to an alumni event. I left my pack and bow in the tree and I descended to the ground. I looked around for a few minutes and noticed two fresh rubs. I knew Heartbreaker had made these and I was in the right area. 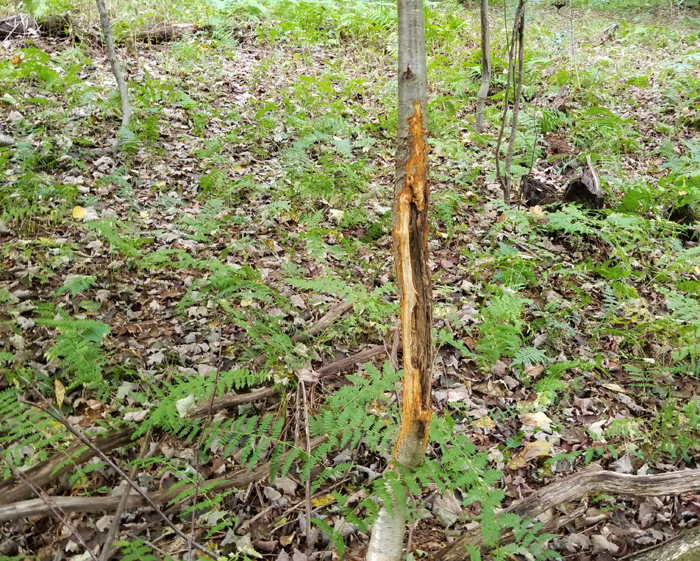 During the afternoon I went into Erie, PA and attended an Alumni Weekend, at Gannon University. Many of my friends who I played soccer with were in town for the event. It was a great time to catch up and watch the current soccer team play. After the game was over I spent a little bit more time with my friends and then drove back to the farm for the evening hunt.

By 4:00 I was back in the stand and ready for a great evening. There was not a cloud in the sky and the high pressure system would have deer on their feet. The warm sun on my face felt good. The temperature was still only about 55 degrees. Squirrels and birds were busy completing their daily tasks. At one point a chickadee landed on my arrow! It looked at me, flicked its tail and then flew away. My confidence level was through the roof! I had a strange feeling I would get to see Heartbreaker tonight. 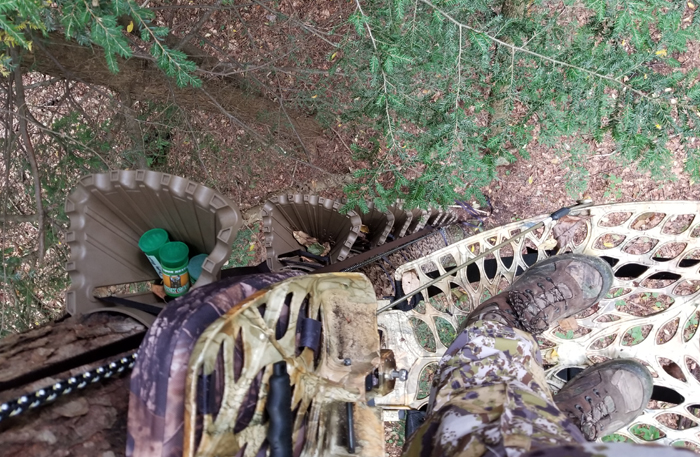 The sun was setting quickly and I had not seen anything the entire day. Around 6:45 I could hear a deer in the ravine to my right. I peered over my shoulder and saw antlers coming my way. I wasn’t expecting a deer to come from behind me and the wind was blowing that way. I never thought twice about it as a hemlock tree was behind me and I was covered up with Nature’s Essence, Essence of Fall. The buck came out of the draw and right away I knew it was Heartbreaker. He looked amazing as he closed the distance toward my set. I reached for my Athens Altitude and got ready for a shot. Being left handed I had to face the tree to watch Heartbreaker close the distance. My hand was ready on the Stan’s SX3 release as I watched him close to 10 yards. I looked for an opening but the hemlock had only a few openings.

Heartbreaker stopped at 10 yards and looked around. I had a small opening between two branches and I fought the urge to draw. My heart was pounding  as Heartbreaker looked left and right. I needed him to turn right and come to the mock scrapes. I looked at the opening again and felt my odds were not good at the shot. I waited urging him to turn right. He took a step right and faced the mock scrapes. Squirrels were running all over the place and chattering and the buck turned back to his left and slowly started walking away. My heart sank and I was physically sick.

Watching Heartbreaker gracefully walk away was horrible. I really thought my well thought out plan was going to be successful. I began to second guess myself on why I didn’t shoot. I looked at the small opening in the hemlock and was trying to convince myself I should have taken the shot. In the end, I knew I made the respectful and correct decision. The last thing I want to do is take a bad or rushed shot on an animal like Heartbreaker. I have too much respect for him and any other animal I choose to hunt.

Knowing I still have the rest of the season to hunt I am fine with waiting for another day. If I was able to have him in at 10 yards, without spooking him, I felt confident I would see him again.

'Big Eyes' We stalked a Giant, and then....SLOCK