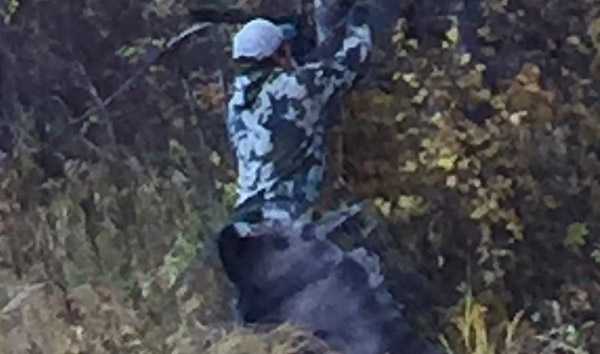 Rick Philippi is bowhunting Moose near Edmonton, Alberta Canada with Ryk Vischer.  the internet signal is decent there, even in the hunting areas, and we plan on keeping in touch via texting. After breakfast the handful of moose bowhunters went with their guides to their moose hunting locations.

Rick’s one on one guide is Terry Brew. The area Terry took Rick to is a large walk-in only Canadian forest preserve set aside for bowhunters. This area is known for its Moose population as well as big Whitetail bucks.

Terry went to 3 Rut Pit sites and quietly set up to call for a Bull Moose. In the afternoon a moose cow came to a Rut Pit and put her scent around the immediate area. Rick observed plenty of bull moose sign, pushed over saplings, rut pits, rubs on sapling trees, and distinctive moose trails revealing where moose travel through these woods.

This area is a mixture of aspen and pine trees and visibility is poor. Terry had brought a cow moose decoy with them and he set it up and he and Rick hid 40 yards away in some brush. Then Terry began to call.

Before long Rick’s iPhone signaled it was low on battery. The last text I received before Rick’s battery went dead was that they heard a bull Moose’s guttural calls in the woods behind them.

That night Rick charged his iPhone and in the morning he texted me that his iPhone battery had died. And wrote the two words, “Moose City.”

My long time bowhunting buddy Rick Philippi is currently in Alberta Canada, near Edmonton and he is bowhunting Moose with Ryk Vischer. Sound like something exciting to do? Absolutely.