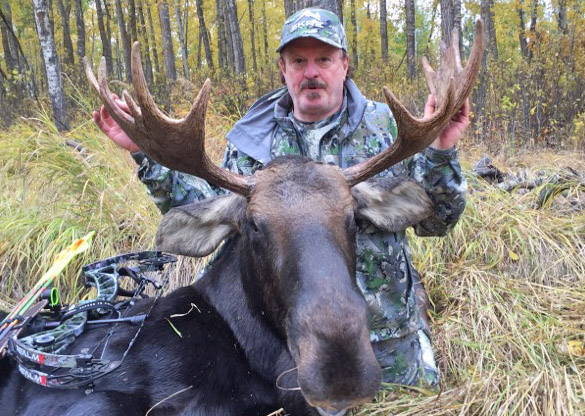 Rick Philippi was on is first Moose hunt with his bow. And his guide Terry Brew had just masterfully called a bull moose out of the Aspens, Pines and saplings and into the smallish opening in the woods directly in front of Rick.

At this point two different realities joined together perfectly.

As an expert moose guide and skilled moose caller Terry Brew who uses only his mouth and hands to call. He draws on his many previous experiences to create realistic sounds that tip the bull moose toward a feeling of confidence (there was no danger) and create interest (a challenging bull and a cow moose were nearby), and also use a little vocal trickery (what you hear is not what you think it is) before handing the situation off to Rick Philippi.

Rick Philippi had no prior moose hunting experience, in fact before this hunt he had never actually seen a moose in the wild. However, Rick is a savvy, life long woodsman and bowhunter. He began bowhunting whitetails as a Junior High School student in Illinois and he’s logged thousands of hours in treestands and ground blinds learning how to read deer, bears, wild turkey and other big game. He knows there is a time to shoot, but also times when waiting is better.

When Terry Brew saw the shape of a bull moose in the trees he watched it and bumped him with teaser cow calls to entice it closer. Rick made sure that his outline was broken up by the trees and brush around him.

The bull moved to the edge of the trees and surveyed the opposite side of the opening. At just the right time Terry called perfectly, a bull moose threat. The bull promptly stepped into the open. Rick knew, right then, that the hunt was on.

Twenty-five yards from Rick the bull stopped and stared directly at Rick for several seconds. Terry knew two things were wrong for his hunter. The moose was head-on with Rick and not a good shot angle, and the chances were increasing that the bull would bolt and run. Terry called again, it had to be right … and it was. The bull glanced in Terry’s direction and then walked toward Rick. He stopped 8 yards from Rick … a little to the right, and still looking at him.

Terry knew what to do now and used hand movements to add a little hocus-pocus on his cow call; the perfect sound, at the perfect volume, and the bull did what both he and Rick wanted it to do. He looked in Terry’s direction and then shifted his attention and turned his long, dark body toward the nearby sound of a cow moaning for him.

Slowly, purposely, the Bull Moose slow-walked in front of Rick, now 7 yards away. Rick knew exactly what to do, too.

Rick was done with his waiting game, and he had already used a tree to hide the movement of his draw. Rick’s arrow popped through the Bull Moose’s vitals. The bull spun half around and ran … and suddenly stopped … and dropped … in 25 yards!

The first bowhunt for moose was over for my friend Rick Philippi. And it was a big success. Terry called outfitter Ryk Vischer on the smartphone to let him know that Rick had his bull. Although this hunting area is limited to walking only the game department allows an outfitter to use an ATV and trailer to bring out moose. And that’s what Ryk did.

My long time bowhunting buddy Rick Philippi had this hunt in Alberta Canada, near Edmonton and he bowhunted Moose with Ryk Vischer. Sound like something exciting to do? You bet it is.