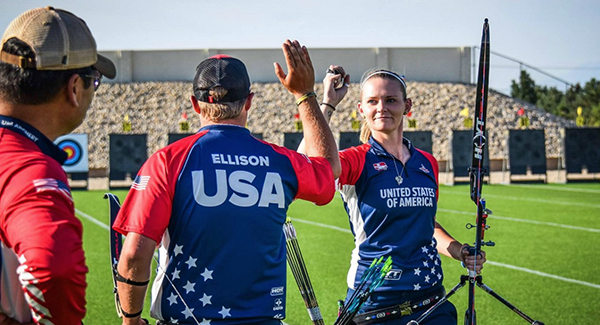 The United States Archery Team consists of the best Master, Senior, Para, Junior and Cadet archers in the country; here’s who made it for 2019.

The United States Archery Team (USAT) consists of the best Master, Senior, Para, Junior and Cadet archers in the country, selected based on performance in national and USAT series events over a yearlong season that travels the United States.

Making USAT is a tremendous accomplishment that reflects countless hours and arrows of practice, travel and competition. Athletes who compete on the USAT event circuit do an amazing balancing act of school, work, family, friends and countless other commitments. It takes a great amount of time, effort and personal sacrifice, and the dedication required to reach this level of success is significant.

USA Archery saw another incredible year of record-breaking participation at theUnited States Archery Team events, and many state, national, and world records were shattered as the level of competition in the U.S. continues to soar to new heights.

Beyond the prestige of making the USAT, archers earn the right to wear USA across their backs on a special team jersey, and are provided discounts and products from generous USA Archery Sponsors.

At age 18, reigning world youth team champion Jack Williams returns to the Senior USAT as the second highest ranked male recurve shooter behind Brady Ellison. “Making USAT and the World Cup Team means a lot to me because I get to represent the U.S. across the world,” shared Williams. Williams represented USA at every stage of the World Cup this year, aiding in top 10 team finishes at each event. “I’m looking forward to another year of traveling with the team and winning for Team USA. This year of upcoming World Championship and Olympic Trials will be difficult, but I am up for the challenge and ready to go out there and shoot for Team USA.”

The compound Senior men’s USAT rankings were the tightest of them all. Braden Gellenthien solidly locked up the top spot by a wide margin, but the next five archers were separated by fewer than one and a half points. With a gold victory at the 2018 Archery World Cup Final, Kris Schaff jumped into the second spot.

In 2018, Cadets continued to run the largest and most competitive field. Athena Caiopoulos has been competing at USAT events for the past 6 years and has been named to the Cadet USAT team an impressive five consecutive times. “The USAT team has had many different meanings and different places in my life,” shared Caiopoulos. “I remember being so intimidated by the formerly red, USA-emblazoned jersey, and found it an unreachable goal. The first time I made it on the team, I was more anxious than elated — it meant that I needed to live up to the name I now bore on my back. Then, my tension broke to better relations and camaraderie with the girls competing around me, and I eventually saw my involvement in archery as a way to be closer with those I compete with, and as a personal challenge, rather than me vs. the world.”

Many youth archers also made the decision to compete up in age categories this year and showed the world what they could do. For example, 14-year-old Casey Kaufhold set a new Senior national recordthis year, became the first National Indoor Final Champion and won the Outdoor National Champion title, finishing third for the recurve women among Olympians Mackenzie Brown and Khatuna Lorig. Reigning world youth champion, 19-year-old Alexis Ruiz, broke the compound Senior women’s national record at the JOAD National Championships and went on to lock up the top spot in the Senior USAT rankings followed by 18-year-old Breanna Theodore. Also making the top compound USAT archers is collegiate archer Sophia Strachan, age 20, who competes for Columbia University’s Varsity Archery Team.

In the midst of a busy season, 2018 also saw the first World Archery Masters Championships. As the Masters division continues to grow stateside, it is also growing around the globe, not only as a fun group, but also as an intensely competitive one. Speaking as both a Masters archer and proud member of Barebow nation, Rick Stonebraker commented, “Making the 2019 USAT team is exciting. The past 2 years I have made the USAT team in Senior Barebow. Barebow has boomed in the last couple of years and I am excited to be part of it. World Archery included Barebow in the 2018 World Archery Masters Games in Switzerland and it was exciting to be part of it. I competed with archers from across the globe. I plan to return to Europe next year to compete at the European Masters Championship in Italy.”

The Para divisions were no exception in displaying exceptional performances this season. USA Archery saw new records and great opportunities with a World Ranking Event in the U.S. The compound and recurve open men’s divisions continued to see increased levels of competition and Matt Stutzman returned to the top of the compound rankings.

Headed into a year of many World Championships and quota slot qualification for the 2020 Games, USA Archery is thrilled to see this continued trend of high participation and increasing scores. USA Archery congratulates its archers on another outstanding season, especially those who made the United States Archery Team selection. Click here to see the full USAT for 2019.

USA Archery is the National Governing Body for the Olympic sport of archery in the United States. USA Archery selects and trains Olympic, Paralympic, World Championship, and World Cup teams, as well as developing archery at the grassroots level across the United States. For more information, visit www.usarchery.org.

A Base Layers How-To