Taking of The 12 Point 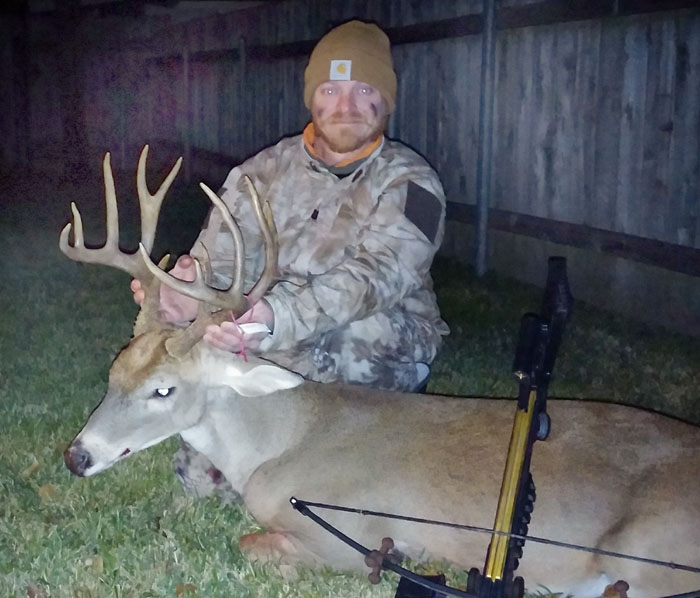 After coming off a high of shooting my first antelope, I focused on our deer season here in Texas.  Not really concerned about our family ranch but more so with helping my childhood friend manage his new ranch and meet biologists numbers in harvest data. The first two weekends I had taken 6 management deer with my bow but that following Monday something didn’t feel right with my right arm. My job has some physical requirements and I was finding it difficult to do. So I went to the doc and they ordered the MRI……..results: complete tear of my tennis elbow tendon!  A week later, three weeks into bow season, I had surgery.

Just my luck. Started rehab and my therapist was an archer. He gave me a painful regime to get me back in “archery shape” before seasons end. Lucky for me I had a crossbow. A cheap little package deal I bought for my kids to have fun with. I called Jason at Black Eagle Arrows and he guided me to 1/2 doz Executioner bolts. I feather fletched and had them drilling bullseye out to 15 yds in a day. One might say “15 yds, that’s not that far!” But this crossbow was a straight limb one that shot a whopping 230fps so I didn’t want to push my ethical limits.

Well I went to our ranch and checked my camera for the heck of it to see what was in the area. I had 13 different bucks. 5 shooters. One that was the biggest buck I’ve ever seen out there. A high tined typical 10 pt with matching split G2’s making him a 12pt!  This buck was my goal or I was gonna let my son shoot him with a rifle.

Over the course of the next 23 days I had 3 encounters. One at 12 yds but he wouldn’t turn broadside. I also had several pictures of him but nothing to pattern other than he stayed at the front part of the ranch. Zero pictures of him in the back. On the 24 th day, I told myself I was going to go sit the back stand and hopefully see a pig. Not even 20 min into the hunt and my buck emerged from the bushes. It was 34 degrees that day so I was bundled up. As I turned in the treestand to make the shot, he heard me. He looked up and around but my Kryptek camo kept me hidden well. So he just turned left and walked off.

I was pretty disappointed but I told myself that maybe God is saving him for my boy.  An hour later I heard a crashing sound from behind me. Thinking it was pigs, I turned and got ready. Then, out HE steps! He finally stopped and right in the middle of a limb with no shot.  He stood there for an eternity, turned to his right and walked directly under me.  And STILL no shot due to the platform. I just knew he was going to smell me and all I would be seeing was a flashing white tail.

The big 12 walked out and paused at 5 yards just long enough for me to send a Ramcat tipped Black Eagle Executioner through his chest!  He kicked like a mule and then trotted out about 40 yards and expired. I was shaking so bad I couldn’t get down.  Once back at my parents my dad told me it was the largest buck he’d ever seen come from the river bottom portion. The 12pt grossed 135″ and was one of the top archery harvests in that county that year.

How To Hide From A Buck’s Eyes

How To Hide From A Buck's Eyes