Hunting to the X-Treme 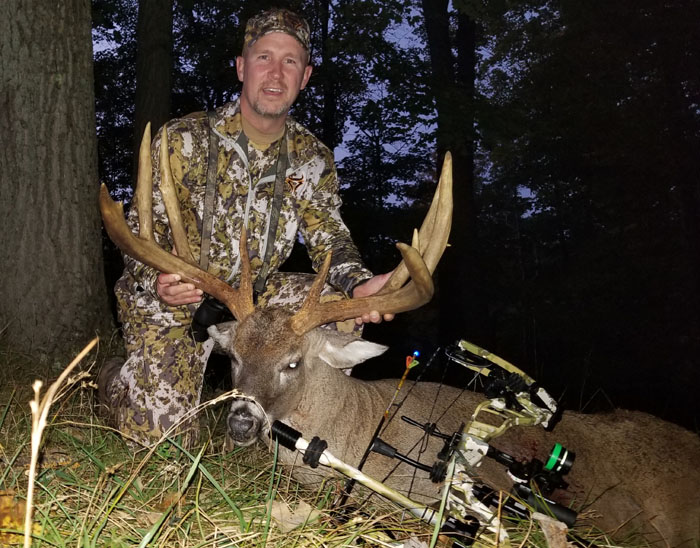 Hunting to the X-Treme: X-Treme World Class Whitetails of Ohio

In 2017, I was introduced to Ron and Karen Douglas, owners of X-Treme World Class Whitetails of Ohio. This couple has a passion and love for the outdoors that is rivaled by few. Karen makes the most delicious meals, helps with guide work, and treats you like a loved family member. Ron manages the outfit in Ohio and also has an outfit in Alaska where clients can hunt moose, brown bear and other Alaskan species. With over 20 years in the outfitting business you are guaranteed a great experience.

My first hunt at X-Treme was amazing. There were many bucks roaming the property and the other hunters in camp made the hunt a blast. I hunted with Ron and killed a beautiful 9 point. The experience was different from any other hunt I had been on. When Ron and Karen invited back, there was no doubt I would be going in 2018.

I kept in touch with Ron and Karen through email, phone calls and texts and was really looking forward to my return trip, planned for the first weekend in October. I also learned Tony Garst and his brother Chip would also be in camp again. These two hunters are a blessing to be around and I was looking forward to sharing camp with them again.

The 2018 PA archery season came in the last weekend in September. I hunted the first day and had my #1 target buck visit me the first evening sit. Even though he was at 15 yards, I couldn’t get a shot at him due to some trees. I knew my trip to X-Treme was only a few days away, so I was all right with passing on the buck.

Friday, October 5th finally arrived and I made the 3 hour drive to Millersburg, Ohio. The weather looked great with temperatures in the 60’s. Saturday and Sunday were going to be in the 80’s with a chance of scattered thunderstorms. When I arrived at camp I was greeted by Tony, Chip and Ron who were in the driveway talking about the morning hunt, and the success that they had. Each of them offered a firm handshake and warm greeting before we went into the lodge so see Karen. She was busy preparing a delicious lunch for all of us to enjoy.

During lunch we all talked about last year’s hunts and then moved on to this year’s hunts. Ron talked about some of the great bucks he had at his place while the rest of us listened closely. Plans were made about the evening hunt, and we all left the table to prepare for the hunt.

While everyone was busy dressing, spraying down with cover scent, and packing snacks I was hurrying to put my new Tactacam 5.0 on my Athens Altitude. Earlier in the day I had received my new camera and with the gun mount system, I was easily able to attach the camera to my stabilizer. I was ready for the hunt.

The evening was looking promising for deer movement. The wind was light and the forecast called for a light shower before 5 pm. With two Polaris UTV’s waiting for us, we packed our gear and headed to the blinds. Tony and Chip were headed for a blind toward the west and I was heading to a blind toward the back of the property overlooking a large CRP field.

Riding to the blind the air felt great on my face. I was watching all around looking for movement in the woods. The trees were still full of leaves making it was hard to see into the timber. We arrived and I spent the next few minutes getting the blind ready for the hunt. I nocked a Black Eagle Spartan, tipped with a new Grim Reaper Pro Series expandable and sat down.

Ron’s blinds are comfortable with windows on all sides giving you a great view and access to shooting any direction. Lee, my guide and good friend, was in the blind with me and we began scanning the CRP field for deer movement. Behind me the woods started and dropped into a deep ravine. Lee and I passed the time talking about past hunts we had been on together. The wind began to blow harder and then rain. The shower was short and light, once over, the wind stopped and it was completely calm. I was hoping it was going to be an exciting night. 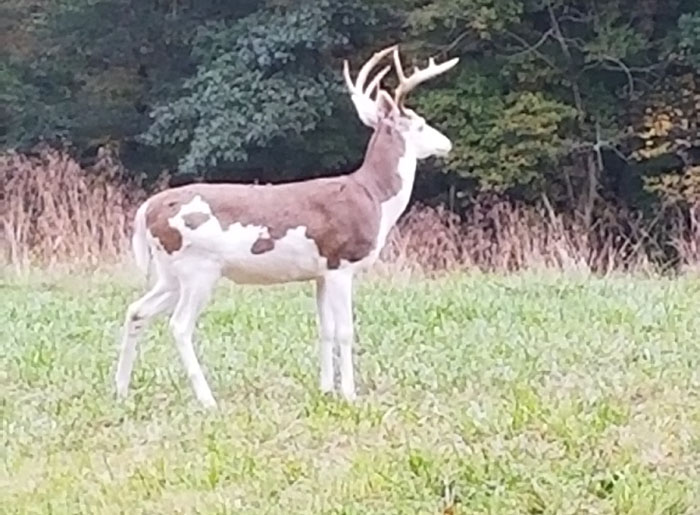 As the sun set, deer began to funnel out of the woods in all directions. Lee and I spent time glassing deer as they grazed in the field. There were many does with their fawns and smaller bucks were next to follow. In the woods to my left, I could see a beautiful piebald buck coming our way. With my camera ready, I snapped a few pictures when he was out in the open. Such a beautiful buck feeding close to us made my heart race. I looked around the field again and there were a few bigger bucks heading our way. 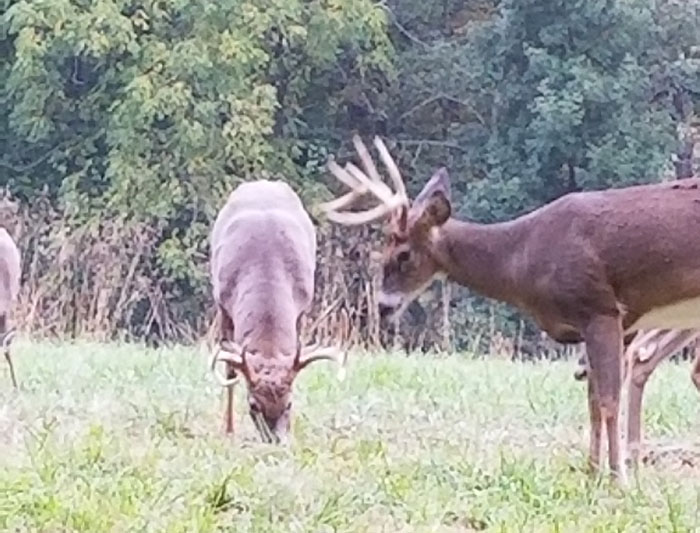 Two bucks in particular made their way toward our set up. A young 8 point, with an attitude, postured and strutted around some of the doe. The does kept eating and ignored his show of dominance. The other was a larger 10 point, with a floppy left ear. Lee and I watched these two parade around showing off for the doe and each other. This show went on for a while until a larger, mature, 8 point entered the field. This buck was perfectly symmetrical and his body was huge. Lee turned on the camera and began filming this buck as we talked about the chances of shooting this deer. I ranged the buck at 50 yards. I decided to let this buck continue to feed.

Watching this beautiful 8 point close the distance, I kind of forgot about watching for other deer. Does began to walk our way as two nice 8 points fed out of the field. Lee and I talked about the bucks and how nice they were. We looked at the video of the deer and began second guessing our decision to let him walk. 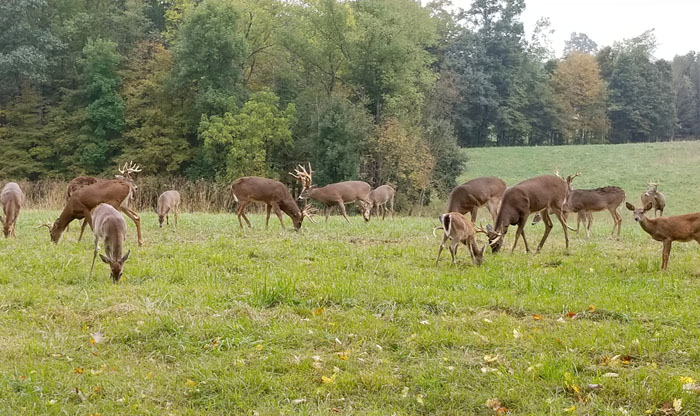 There was still about an hour before it would be dark and I was feeling confident we would see more deer. Fifteen minutes later a few does came back out into the field followed by a few smaller bucks. This group fed our way and stopped 25 yards in front of the blind. We watched the group calmly eat and move closer.

While Lee was running the camera, I told him I saw some big antlers coming our way. He could not see the deer  but I knew the buck was a shooter. Reaching for my Tactacam remote I pressed the button. The camera vibrated twice and I knew it was recording. Lee finally saw the buck and he was closing fast. I was praying this deer would give me a shot opportunity as he continued to close the gap. When he hit 30 yards I waited for him to turn and move away from a doe. The buck moved closer and he was at 23 yards. I adjusted my HHA sight to 23 yards and then started counting points. He looked like a big 9 point with a possible kicker on his left G2. All he needed to do was turn broadside and I could get a shot.

As he fed on clover the doe moved between us making a shot difficult. I waited as my heart hit the accelerator. Finally the buck picked his head up and turned broadside and then quartered away. He took another step and was clear of any other deer. I drew and found him in my peep, slowly exhaled and let the sight pin float behind his shoulder. I was aiming for the off shoulder and let the arrow fly. The BEA Spartan with lighted GloryNock was easy to see and I watched the arrow find its mark. I heard the Grim Reaper Fatal Steel broadhead impact and then pass through the buck. The buck kicked and took off running through the field.

The buck took off leaving me with a bad case of the shakes. I knew the shot was a good one but Lee and I carefully watched the video that confirmed it. We decided to leave the blind and retrieve my arrow that was coated with crimson blood. I took the arrow back to the blind for the wait.

Later, Lee and I followed a good blood trail through the field and into the woods. Lee glassed the woods and saw him bedded in the ravine. I ranged him at 28 yards and felt it would be wise to put another arrow in him. The arrow flew true and took him perfectly behind the front shoulder. The buck jumped up and took off further down the ravine and out of sight. I listened and heard the buck hit the ground. Lee knew the deer was down for good and headed back to get the Polaris as I set off to find my buck.

Tracking the buck was easy as the buck was pouring Grim Reaper blood. I found my broken arrow along the way and knew the buck was close. Following the natural curve in the ravine I came out into a stream bed. There, around the bend I saw the big 9 laying lifeless. Shocked by his size I approached him slowly and used an arrow to poke him. He did not move and stepped back for a minute to take it all in. I put my bow down, knelt by the buck and gave a prayer of thanks.

Lee brought the Polaris down and we loaded the brute into the back. We into the open where there was still light, so we could take some pictures. Lee had sent a text to Ron and I could hear his Polaris coming closer. Ron arrived and congratulated me on the amazing buck. Pictures were taken, and I retold the story. He was excited to hear we shot the whole thing on video as well.

When we returned to the lodge, we were able to pull up the video footage from the hunt. Everything came out great on video and Ron was pleased. We watched the footage a few times and everyone was surprised that the big buck wasn’t dead after the first shot. The rest of the evening we all sat around the fire ring and told hunting stories. Everyone had memorable hunts they retold with a smile. Sitting around the fire ring with friends was the perfect end to the day.

Ron and Karen Douglas operate X-Treme World Class Whitetails in Millersburg, Ohio. You can find out more about their amazing operation on Facebook or on their website: https://xtreme-wcwo.com . You can also call and speak to them at: 330-237-9960. If you are looking for a hunt of a lifetime, don’t hesitate to contact them any time during the year.

The Rut Before The Rut