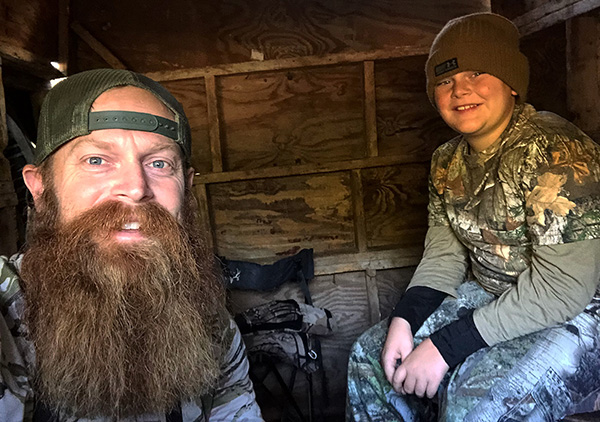 Foremost in my mind, to get a shot at this buck, I needed to be careful and quiet — and fast. Now the buck was even closer to me than the doe. I put the camera down and, both quickly and carefully, gripped the stock of  my loaded crossbow in my right hand and the crossbow-tripod gizmo in my left … and silently placed the crossbow stock in the “U” holder on the top.

Was the buck still in the game?

I shifted my attention back to the shooting window. Using his best stiff-legged walk, he was ten yards away. His attention was all on the doe. Mine was on him.

His angle was a perfect, angling away angle. 10 yards close, I sighted on the ribs on his right side and took my shot. The buck ran.

One of the things I hate about shooting through a crossbow scope is that, after I shoot, It’s difficult to re-find the deer as it streaks through the woods. And, once again, that happened.

I visually picked the woods apart. He wasn’t in sight. My iphone time was 3:43pm.

I texted my friend Rick Philippi, “Can you call me?” My iphone sound was turned off and I saw his name on the screen as Rick’s call promptly came in.

I told Rick that I may have shot the Curved Horn buck. I knew my aim was true. My arrow should have hit where I was aiming and entered the ribs and passed through the liver and both lungs and might have exited on the left side. He could not have gone far, Rick and I both agreed.

Rick was almost as excited as I was.

I texted the people who were down bowhunting deer. Guests Ryan Michler from the website OrderOfMan.com and his cool 10 year old son Breckman (who had shot a wild boar).

Meanwhile a young, black hocked, buck walked through the area.

Richey Hayes had shot a wild hog and said he wanted to help me track the buck.

TO PART #1 OF THIS BOWHUNT

TO PART #2 OF THIS BOWHUNT

TO PART #3 OF THIS BOWHUNT

The Rut Before The Rut, Pt 3