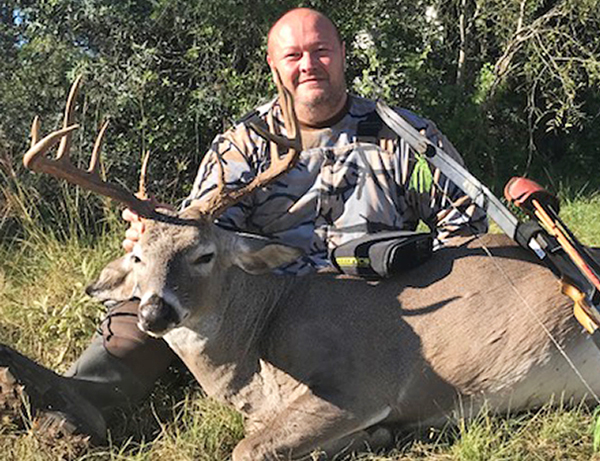 This journey began 11 years ago when Bear Archery sent me a Bear Grizzly 50# recurve. It was the perfect bow to being this quest.  I shot a few animals with that bow and even won a Texas ASA Traditional shooter of Year before upgrading to the Bear Super Kodiak.  This bow was the perfect fit.  I shot a lot of animals and participated in dozens of 3D competitions across a few states.  I loved this bow.

As the years progressed, I changed my shooting style, arrows, broadheads, and tabs. Even picked up a used 1984 Bear Custom  Kodiak take-down recurve from a great friend of mine in west Texas. The one thing that remained the same was this bow. It was my favorite bow to shoot … and still no whitetail buck.

The Bear Super Kodiak continued to serve me well.   I loved watching arrows fly downrange from it. I took the bow elk hunting in the mountains of Colorado.  I wanted my first elk to be with a recurve.  Sadly, I never released on arrow on that trip, but I had a blast.

Doe, turkey, feral hogs, squirrels, black bear and javelin continued to be my only animals that gave me an opportunity to killvest.

The quest continued and last year I got on a lease near Fort McKavett, Texas.  This place is loaded; full of deer, turkey, some free range exotics, and feral hogs.  I saw several bucks in bow range, but the lease has a management program.  These bucks were off limits. I killvested my limit of doe and two feral hogs last year.  I let my daughter use a buck tag to get her very first buck.  Could not be happier for her.  The season ends and no buck for me.

2018 was filled with great anticipation.  There was one buck that made all the management guidelines I was after.  I set my sights on that one buck.

Like most great plans this buck would only walk by out of bow range.  That’s okay.  It was nice to see the monarch control his range.

On my next trip down, I went back to the same ground blind in the hopes of seeing the big guy again.  It was a foggy morning and the deer were moving.  A nice mature doe present a shot and just as I was about to release an arrow this old buck walks into view.  He moved the other deer out of the way.

This buck was twelve yards away and I knew for sure he could hear my heart beating out of my chest.  I drew back and picked my spot.  I let the arrow go and heard and saw a low hit next the heart.  The buck ran to the north of me. I waited an hour and got out of my blind.  I looked for an hour in the mesquite flat and nothing.  I went back to the bunkhouse to get help.  We looked for two hours and nothing.  Never even found my arrow.

I decided to hunt a different stand that evening and it was eventful.  Lots of deer all around me, but no mature deer.  The sun set on a great afternoon hunt.  After a great dinner and camp stories it was off to bed.

The next morning I went to same stand.  I always park at an oak tree and prickly pear patch.  As, I reached my parking spot the buck I shot the day before stood up!!!! The buck was less than twenty yards in front of my truck.  I quickly killed the light and the engine.  The buck hurried off to the west into the mesquite flat.

I gathered up my gear and walked 700 plus yards back to my ground blind.  It was another foggy morning, but not as foggy as the day before.  I settled into my blind and waited for the sun to rise and hopefully burn off the morning fog.

Just like the day before I was preparing to release an arrow on a mature doe. Then out of the fog the buck I shot the day before came and stood in the exact same spot and faced the same direction.  This time my heart was racing, but I was totally focused on picking the spot.  I let the string go and twack!!!  Perfect shot!  The buck ran to the south of me and I watched it the whole time.

After a quick sprint the buck stopped and looked back at the area he came from.  He stood there for a minute. Then he wobbled and walked into an Oakmont.   I listened carefully and heard a crash.  My eleven year quest was over.

The rush was intense.  I felt so excited, relieved, and sad.  It was over.  After waiting forty-five minutes I texted my buddy and got out of the blind and walked to the Oakmont.  I looked around and did not see the buck right away.  I walked a few more feet and I spotted the deer fifty yards away. Like I do with all my killvest I thank the Lord Almighty for blessing me.

I walked over and laid my hands on his rack and said thank you.  Quest Completed.

Now I need to get an elk with my recurve.  Start the clock!!!

The Rut Before The Rut, Pt 3